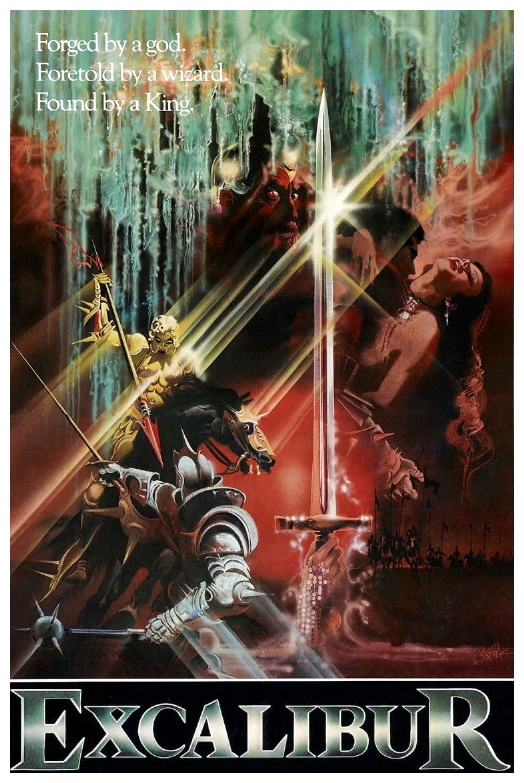 SYNOPSIS:
“As the title would suggest, it follows the travels of the legendary sword Excalibur through Arthurian myth, from the violent, powerful hands of Uther Pendragon, to a long-years’ rest in the stone to being redrawn by Uther’s son Arthur, who uses it to defeat the evil invaders and establish the great court of Camelot and the great Knights of the Round Table. It is there in Arthur’s glory years and in his decline, brought on by the love affair between his wife Guenevere and best friend and best knight Sir Lancelot, the Holy Grail Quest which produces many casualties among the knights, and the arrival of Mordred, the son Arthur had by his evil half-sister, the sorceress Morgana. Through it all, the magician Merlin watches over everything, always ready to throw in a Charm of Making when it’s called for.” (courtesy IMDB)

REVIEW:
The supernatural is one way of showing that our everyday reality may not be the whole story. A more direct way, of course, is to create an entirely fantastic world from the ground up. Until the eighties, when the popularity of so-called ‘sword-and-sorcery’ novels became so great that filmmakers could no longer afford to ignore it, there were very few producers who were prepared to take on the Herculean task of building an entirely ‘other’ world of magic, with all the problems of sets and special effects that the work would entail. Existing myths were the obvious source of such movies though, later on as filmmakers began to put greater trust in the audience’s capacity to lose themselves in a story, it became quite common to invent new fantastic worlds altogether, usually in some unspecified archaic past, or in some unspecified alternate universe. Star Wars IV A New Hope (1977) did both. 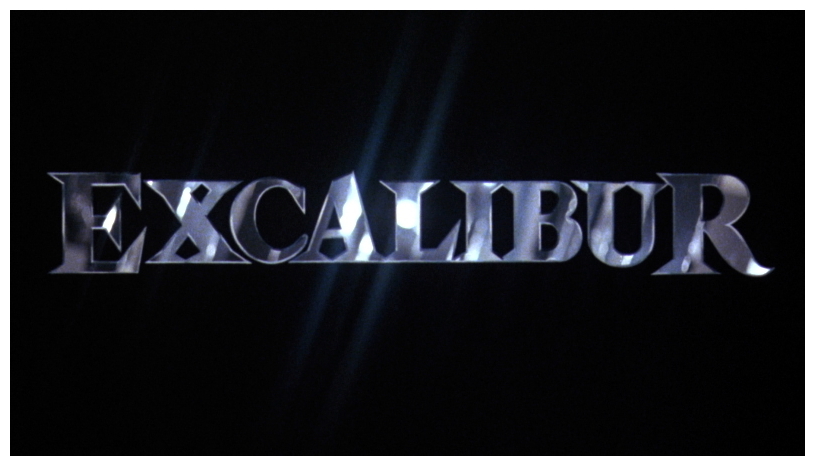 The legend of King Arthur has a more immediate resonance for English-speaking people than the legends of the Greeks or the Indians. Certainly it had for director John Boorman, who had been planning his production of Excalibur (1981) for more than a decade before he finally made it. It came out about the same time as Ray Harryhausen‘s Clash Of The Titans (1981) and the two films make an interesting contrast. Boorman understands that a myth is more than a story packed with incident. The stories of myth are stories of the evolution of human consciousness and symbolise our archetypal concerns. Whereas for Harryhausen a prince is just a brave young man, for Boorman a king is literally the integrity and fertility of the land he rules. When Arthur rides into cleansing battle, flowers spring up in the grass he passes. 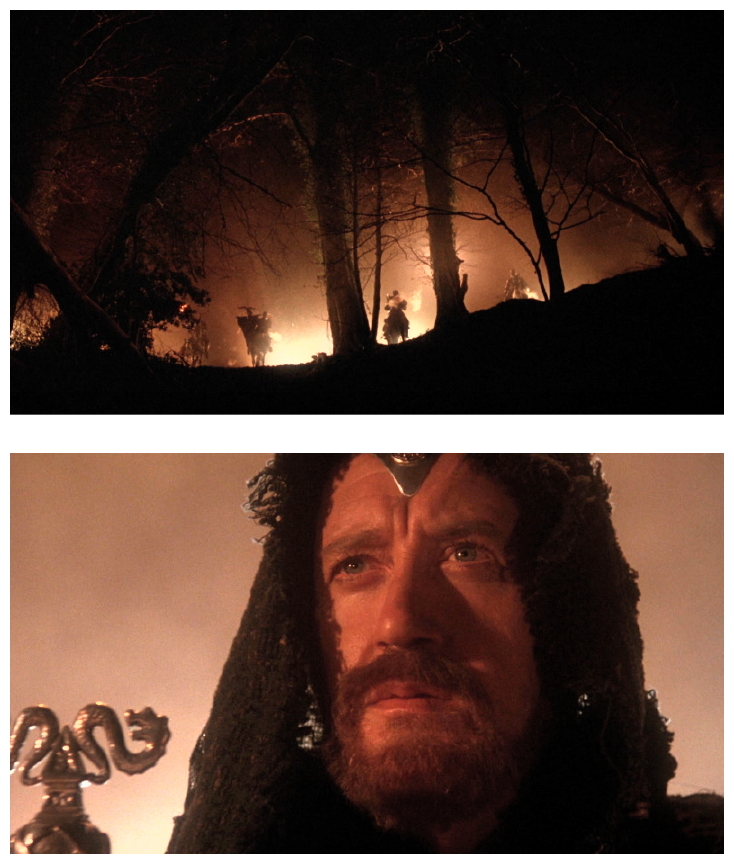 The film begins with Uther Pendragon (Gabriel Byrne) using Merlin’s (Nicol Williamson) help to defeat another Celtic lord. He then has Merlin transform him into the dead lord’s image so that he can sleep with his widow. The result is Arthur. When Arthur becomes a young man (Nigel Terry) he pulls the sword known as Excalibur from the stone, indicating that he will one day be king. Merlin teaches him the ways of the world. Arthur is victorious in battle and becomes King of England. Going against Merlin’s wishes, he marries the gorgeous Guenevere (Cherie Lunghi). After an exciting sword fight, he befriends Sir Lancelot (Nicholas Clay), who becomes the King’s most trusted knight. Lancelot loves Arthur but betrays him by sleeping with Guenevere. 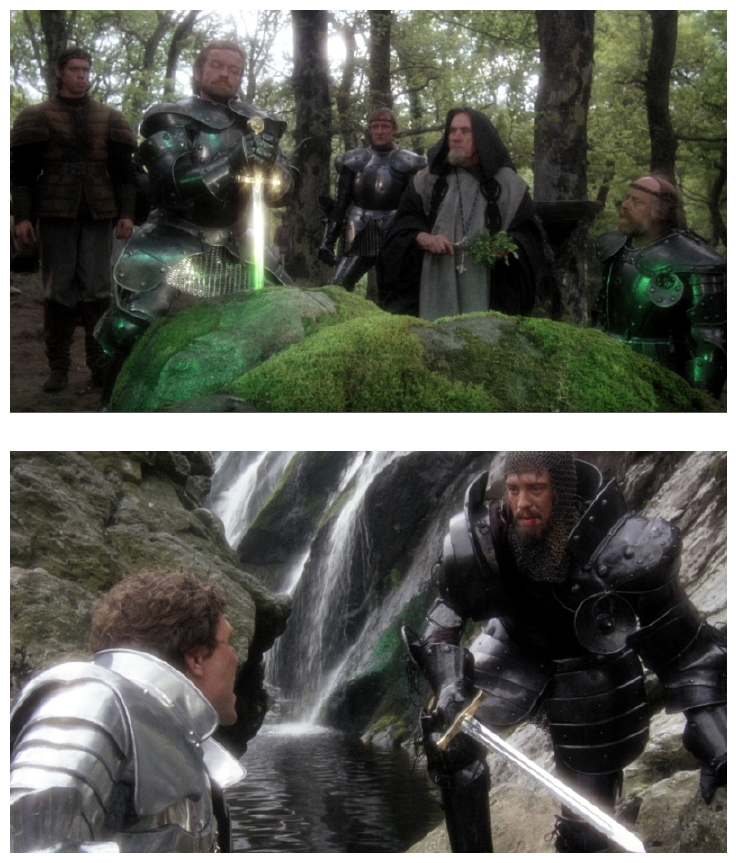 Arthur’s sinister half-sister Morgana (Helen Mirren) seduces him while disguised as Guenevere, and Morgana bears him a son named Mordred (Robert Addie), a baby-faced beauty whom we usually see, later on, in moulded body armour and a cruelly beautiful mask. Sorceress Morgana freezes Merlin and sets up a series of events that will put her evil son on the throne, while Arthur and his knights search for the Holy Grail. Merlin returns at the end to rob Morgana of her youth and beauty in a scene of foggy dissolution. Arthur and his son Mordred kill each other, Excalibur is returned to the Lady Of The Lake and we feel that, beneath the surface of the world of rationality that will now prosper, magic is not dead but merely sleeping. 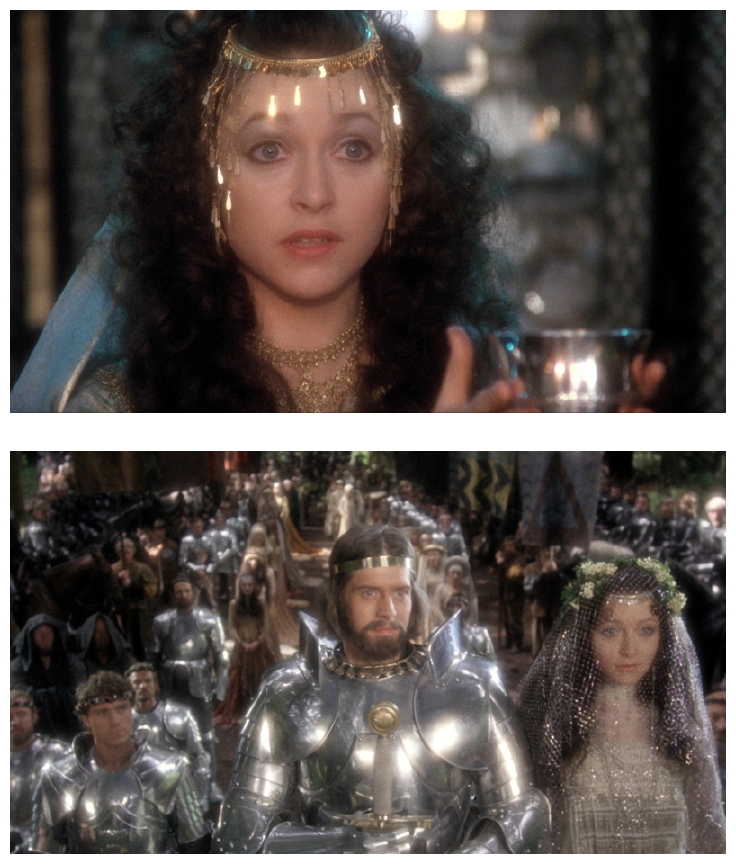 Excalibur is set between two worlds – a fragmented world of dark magic and mysterious powers – and a lighter world where technology and political unity are beginning to arise. Arthur himself is a transitional figure, bred by the first world in an act of rape presided over by a wizard, carrying a sword which seems to represent the brighter, colder powers of modernity. His mentor, Merlin, belongs to the first world (though the alchemy he practices will become the very science that supplants him). Arthur’s task of reconciliation between two kinds of living, two kinds of imagination, is a difficult one. As in most of Boorman’s films, the sheer complexity of the mythic symbolism sometimes makes events seem fuzzy, and Arthur’s role is not always clear. In the earlier part of the film, human life seems to spring naturally from the grass, the dark trees of the forest. The armour of the knights looks like the leathery hides of dinosaurs. When Arthur inherits the sword and a kingdom and establishes the Round Table, the setting changes. The corridors of Camelot gleam brand-spanking-new, the armour of the knights is bright and shining, we have moved from a world of nature to a world of artifice. But older forms of magic (which are presented as potently attractive as well as dangerous) hinder progress. 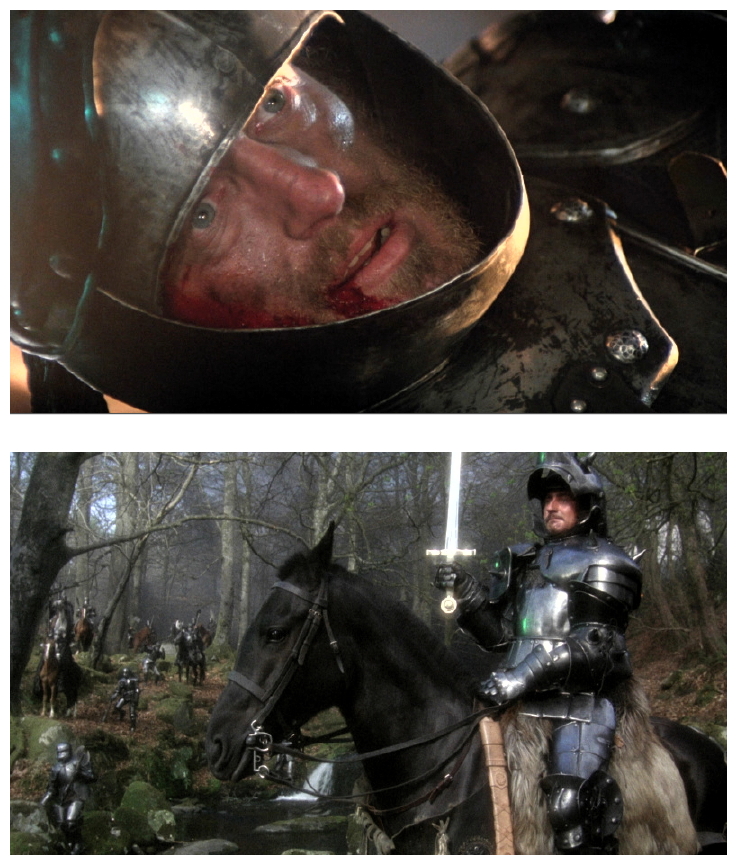 Excalibur is a flawed film, no doubt, with a daft performance by Nicol Williamson as Merlin using an extremely unsatisfying funny voice (often giving rise to audience laughter in the wrong places). The script by Boorman and Rospo Pallenberg becomes a little hard to follow, inspired as it is by the writings of Carl Jung: Characters can become victims of passion (love, desire, power, lust), but mythical heroes such as Arthur and Merlin can emerge victorious only when they suppress their human emotions and allow themselves mythical superhuman status. Nevertheless, the film provides us with glimpses of the authentic magic which the cinema can create. Even if you lose track of what’s going on, the visuals still have an impact, the search for the Holy Grail and the final battle are stunning sequences, lusciously photographed by Alex Thompson. Excalibur also benefits from early performances from future Hollywood stars such as Gabriel Byrne, Cherie Lunghi, Liam Neesom (as Gawain) and Patrick Stewart (as Leondegrance). 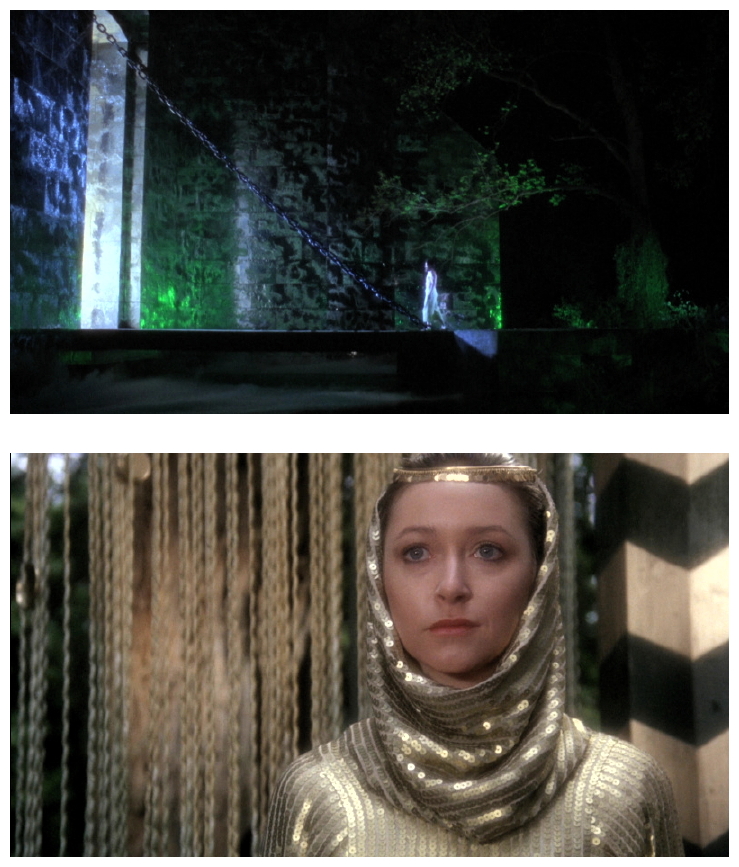 Boorman blends fantasy and reality seamlessly, holding back on more tangible, conventional depictions of the fantastic. Instead gritty bloody battles worthy of Roman Polanski‘s Macbeth (1971) share screen time with sophisticated supernatural rituals and mysterious hellish transmutations. Most adaptations of the King Arthur legend either downplay Merlin’s magic or eliminate it altogether. Even a grand Technicolor musical like Camelot (1967) doesn’t fully trust this angle with skeptical modern audiences. But Excalibur thrives on its sumptuous other-worldly vibe. Boorman deftly uses soft-focus, slow-motion, post-dubbing, and the commanding music of Richard Wagner to fully embrace this universe of aging wizards and vengeful blood relations, reminding us once again that while future Camelots are indeed possible, they will forever be tainted (or at least compromised) by human feelings. I’ll now leave you with that thought in mind and quickly make my farewells, politely asking you to hit the road with me again next week while I drive you to delirium to witness another car crash on the gridlocked streets of Hollywood for…Horror News! Toodles! 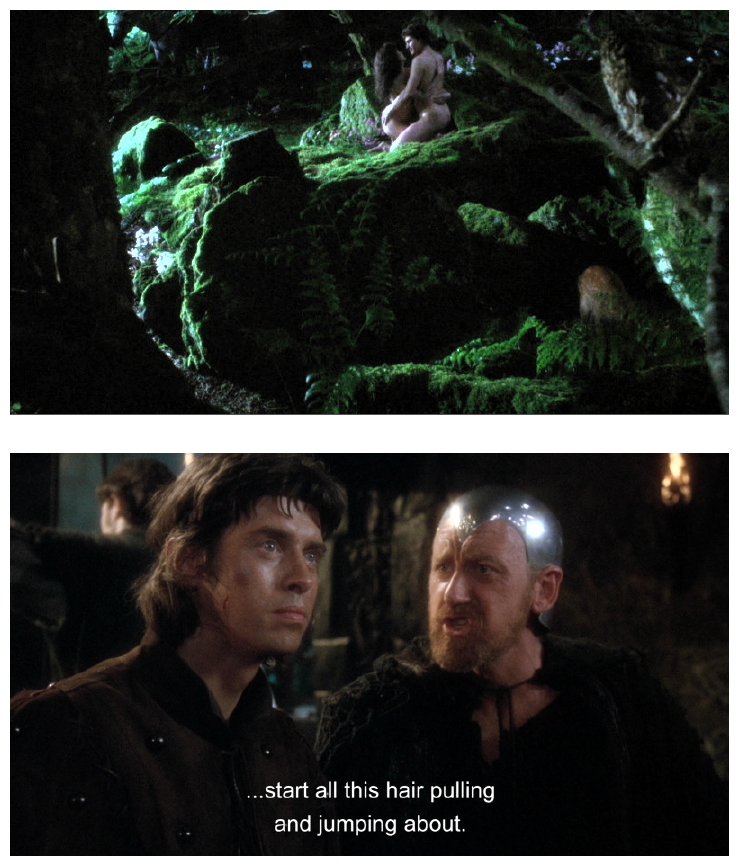