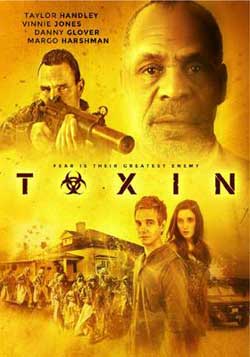 A pharmaceutical company recruits a well-known scientist to help develop a vaccine against a deadly virus.

If reality truly did imitate art, our wacky governments would be precariously on the cusp of unleashing Armageddon upon the world with clandestine experiments in biological warfare. Life as we know it could be a well-intentioned animal rights group (“28 Days Later”) or one panicked soldier (“The Stand”) away from becoming life as the cavemen knew it. Those two examples were straight off the top of my head, as the motion picture industry has exploited this terrifying scenario throughout the years over and over. And over. And so on.

In order to rise above the swarm of similar offerings, it takes more than a capable production crew and a couple of names that were famous fifteen years ago on the posters. It requires innovation above mere competency, an X factor that “Toxin” is sadly lacking. An intimate glimpse into the early stages of a pandemic initially, our latest grows increasingly silly as the plot progresses into a flaccid and predictable second half.  This is one of those films that seems to be under the impression it offers the viewer a whole lot more than is actually happening onscreen. 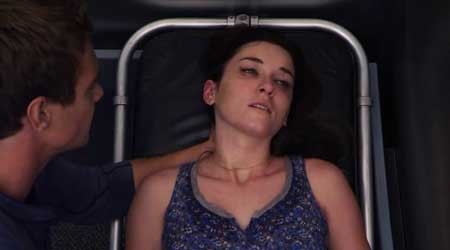 Taylor Handley of “Texas Chainsaw Massacre: The Beginning” stars as Dean, who has just returned from a knotty tour in the Middle East that he refuses to discuss and leaves him haunted. His girlfriend Mandy (Margo Harshman, “Sorority Row”) has arranged a camping trip with friends for his welcome back, because apparently he didn’t get enough sleeping in tents and eating out of a backpack in the desert. Along for the trip are token non-cracker Rhonda (Tiffany Hines, TV’s “Bones”), neat freak Ricky (Ryan Pinkston) and resident blonde Isabelle, portrayed by Beverly Mitchell from “Saw II” and that terrible show our little sisters made us watch, “Seventh Heaven.” The oddest member of this sextet is newcomer Leebo Freeman as Travis, a snarky Brit who seems haphazardly plugged into the dynamic from another film entirely.

Their plans are detoured by news that Dean’s grandmother Sara (Fiona Hale of “Seven Pounds” in an outstanding and brief performance) is going to be evicted from her home if several health code violations aren’t immediately dealt with and corrected. The task proves larger than expected when they arrive at her isolated farmstead to piles of random junk as a result of Sara’s unchecked hoarding. Her confession is a disarmingly gentle moment, a sentiment “Toxin” attempts to repeat throughout the run but never quite duplicates. 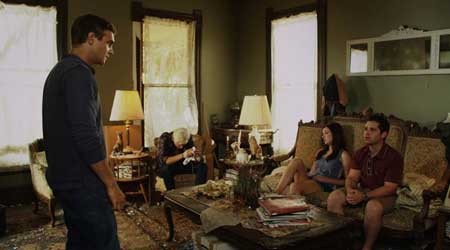 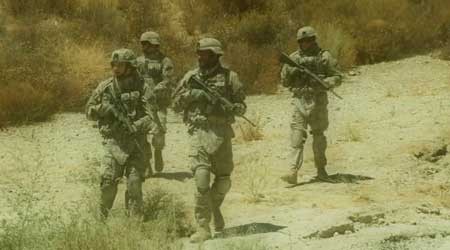 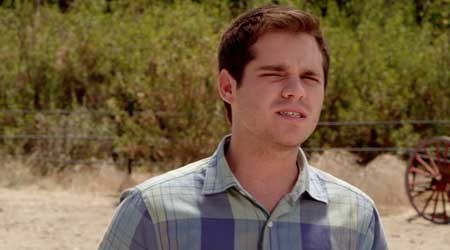 Sorting bric-a-brac and burning through the Endust are the least of the group’s tribulations, however. Sara has been given the unfortunate nickname of Patient Zero by a shady military (I think) organization working out of an underground complex beneath the property adjoining hers. It seems the mold in granny’s basement can be synthesized into a virus, and her accrued immunity makes her the perfect test subject for a trial run. At least, that’s the gist of what could be gathered from the impenetrable movie science babble spouted by everyone. My personal favorite is the phrase “viral deconstruction,” which if searched for will provide only links to videos of buildings being destroyed. Pretty cool footage, but probably not what the eggheads who populate “Toxin” are talking about.

The deadly strain, delivered via day-glo green spores resembling tiny coin machine sticky balls, acts quickly upon infection. Hot on the heels of the standard issue warning symptoms (nosebleeds, rashes, etc.) is a murderous aggression in the “rage virus” vein, but even that juicy morsel of added danger is squandered in the hands of writer/director Jason Dudek (the 2001 documentary “Open Mic”). Despite a lackluster opening sequence and Rhonda’s ineptly staged death after contracting the disease, this aspect is never really explored as an issue once other members of Dean’s entourage fall ill. Mandy simply reacts as one would to food poisoning once she joins the ranks of the sickly. 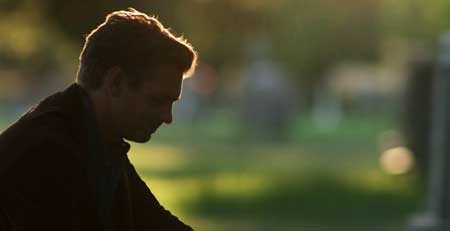 One thing “Toxin” does well is casting in the bad guy department, but even that boon proves to be a double-edged sword when two fine actors are wasted in dull roles. With the exception of “The Midnight Meat Train,” Vinnie Jones has been repeatedly underused and/or miscast since his debut in “Lock, Stock and Two Smoking Barrels,” and his Renner is no exception. Heading up the fatigue-wearing half of the villains, he is easily overtaken by Dean and his weakling buddies once they grow wise to the situation.  It’s downright embarrassing. On the lab coat side of the equation is Danny Glover as Dr. Locke, looking slightly bemused by the indistinct bullshit he’s forced to spew. If Mr. Glover is getting too old for anything, it’s toothless paycheck movies.

Bringing absolutely nothing of its own individuality to the table, “Toxin” will likely only appeal to the desperate Saturday evening Redbox customer who must see anything even remotely horror-related to chase away the loneliness. Hell, I’ve been there, friends. And that movie choice was likely a mistake.