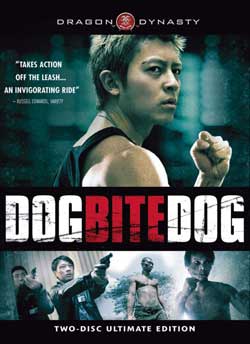 Cambodian hitman Pang, fresh off the boat in Hong Kong, successfully takes out his target. He doesn’t get very far, however, before the cops are onto him, kicking into motion a manhunt that will claim many more lives. Hiding out in a garbage dump, Pang rescues a girl he finds there from her incestuous father. She immediately attaches herself to her savior, despite the fact that he is a ruthless killer. Unable to abandon her when he realizes she is willing to sacrifice herself for him, he tries to take her with him in search of a boat home – but this slows him down and he keeps crossing paths with his pursuers. Inspector Wai, as harsh and unmerciful as his prey, will stop at nothing to take him down, and like rabid dogs the two men are driven to fight to the death.

A key line in Dog Bite Dog, “Creatures live at the expense of other creatures,” hints at the hardened, nihilistic tone of the film. The high-stakes cat-and-mouse scenario pits a desperate killer against a cop capable of plenty of cruelty himself to get the job done, with a body count that soon spirals way out of control. While it is understandable that the police would want to track down a dangerous criminal – particularly a foreigner who unloads his gun into an unarmed victim in public – the mounting costs as he continually slips from their grasp are devastating. If anything, this only impels Inspector Wai further, as circumstances strip everything away from both cop and crook until they are running on nothing but the fury they share. 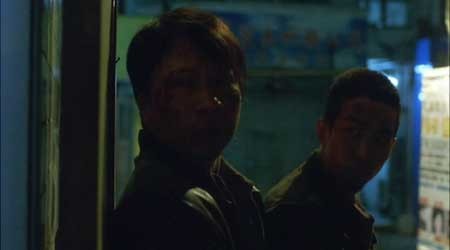 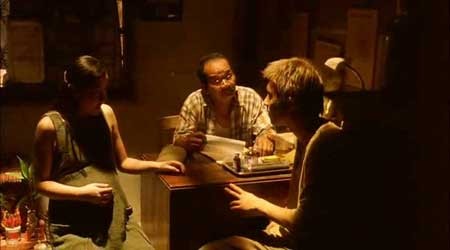 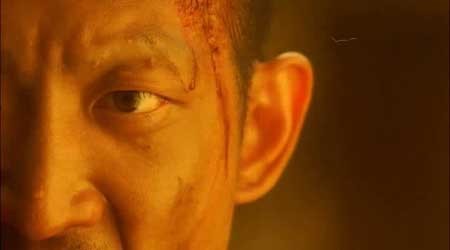 There have been a lot of action movies out of Asia in recent years that wallow in the extremes of violent outlaws – cops, gangsters and victims alike. The most well-known of these include the Vengeance trilogy from South Korea and the twisted visions of Japanese enfant terrible Takashi Miike. But where a film like I Saw the Devil, with its cat-and-mouse duel between equally deadly opponents, revels in over-the-top graphic violence and torture, the beatings and bloodletting in Dog Bite Dog – while not without considerable impact – are presented in a matter-of-fact way that dials down the element of violence as spectacle.

One of the things which makes this Hong Kong/Japanese production so striking is the way that its brutality and ongoing descent into nihilism is countered, every step of the way, by a stubborn drive to preserve the last – and thus the brightest – shred of whatever it is that makes these violent characters humane creatures. The more vicious and destructive they become, the more we get a sense of their bruised humanity – that which elevates them above the level of the animals they appear to be. 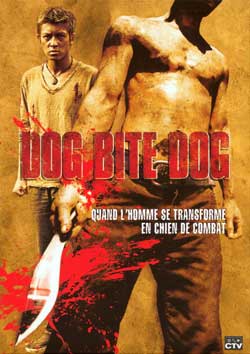 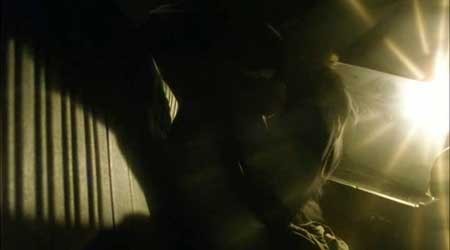 This eternal struggle is taken to operatic extremes in the final act, where the film shifts gears and utilizes a bizarre plot twist to boil itself down to its crucial elements. Viewers who can’t make the adjustment at this point may find the remainder of the film too surreal or absurd, as the characters are reduced to nothing more than expressions of their most fundamental instincts. But this trajectory illuminates the context and consequences of all the violence, taking both characters and audience right to the end of the line. Perhaps we could have done without the soppy ballad on the soundtrack – but relief from the unrelenting grimness is generally in short supply.

Bolder and harsher than a typical crime flick, Dog Bite Dog is raw and gritty, with most of the action taking place against a grimy, cluttered urban backdrop. Director Soi Cheang balances elegant camerawork and an atmospheric soundtrack with a dark visual palette and sombre mood. He also knows how to harness the basic power of cinema: storytelling through images rather than words. The tension and mystery that permeate the film is intoxicating, particularly at the beginning. And the more generic elements of the film are generally interwoven with subtlety and respect for the audience.

The performances of the two lead actors are pivotal to the potency of the film. As the resilient hitman and the unwavering cop, Hong Kong/Canadian actor Edison Chen (the Infernal Affairs series) and Sam Lee fuel their characters with the prefect balance of intensity and vulnerability. Both are driven by a brutal past that has instilled in them an all-consuming savagery and rage, yet you hope one will win out just as much as the other. Which kinda sucks, as you know for certain that one of them – if not both – is going down. Brutal and ballsy, when Dog Bite Dog sinks its teeth in, it doesn’t let go. 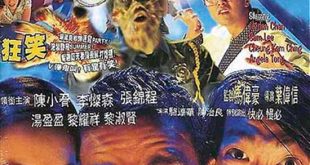 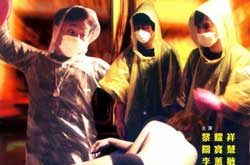