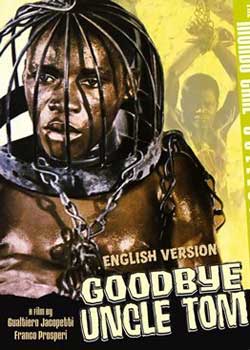 Two documentary filmmakers go back in time to the pre-Civil War American South, to film the slave trade.

Goodbye Uncle Tom works as a fake documentary (yet mostly shot as a film) where journalist from the present day go back in time to interview slave owners and show raw footage of the harsh realities of the slave trade and suffrage of the African American people of this time. Made by Italians, shot in Haiti, using the locals to play America’s slaves, the film looks authentic of its time. The opening shot is a God’s eye view of a cotton field where slaves run in fear and act in other appropriate ways to the landing of a helicopter.

This is unarguably the craziest movie about the injustices of African American slaves in America ever put to screen. It’s hard not to bring up the comparison of Django Unchained which shares some of the exploitative qualities on a much less offensive scale. One scene is particular towards the beginning, where a few white folks at a dinner table give their varied opinions on slavery at the time, is very reminiscent of what filmgoers have recently scene in Taratino’s film. The lengthy film touches unapologetically on a number of inhumane acts done to the slaves during this time which includes, murdering runaways, rape, torture, inhumane medical treatment, forcing together sexual partners for the purpose of controlled breeding , and the list goes on and on. The slave owners are interviewed and often give their racist ideologies on the African race without pause or shame, often in front of the slaves, which they view as not being intelligent enough to understand their words. Many comments made by the slave owners are quotes taken from southern politicians and slave owners of the time.

It isn’t so much the realistic portrayal of the mistreatment on African Americans in this country that makes this movie so extreme, we’ve seen this done many times before on television and in movies, but the exploitative way this picture goes about showing these same things. For one the camera never looks away.

Most films dealing with the subject, like Roots or 12 Years a Slave, display a level of sensitivity when dealing with a subject that brings up so many negative emotions for people. If a slave is being beaten you will hear a heart wrenching string section in the musical score to match the violence being shown onscreen. This movie is not emotionally manipulative in the same way Hollywood has learned to treat movies depicting historical travesties. Instead we have upbeat marching band music throughout most of the film, the kind of musical score you would imagine the slave owners hearing in their heads as their watching the film. Furthermore, the slave owners can quite often be pretty damn funny at times. The film has a silly dark sense of humor on many occasions and the characters can say some purposely or unintentionally humorous things. It feels like they went out to make a serious film but had a lot of fun on set with the actors and crew and chose to not edit those scenes out. 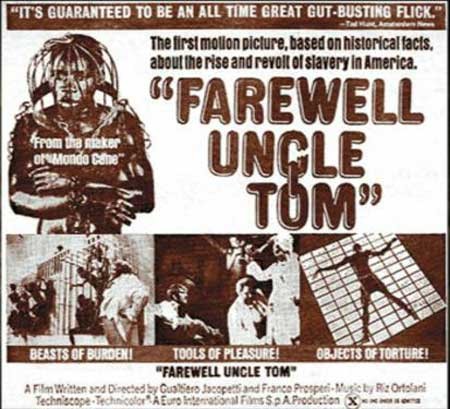 Can you imagine if halfway through Schindler’s List it kind of turned into a comedy? You may find yourself laughing one minute and feeling like a total scumbag the next when something horrible is shown. I think there are a lot of examples of over the top 70’s cocaine influence to be seen here. I’d be doing you a disservice by revealing anything. Every scene is kind of a short film in itself. A lot of noteworthy incidents put on camera that make you scratch your head. If ever there was a movie deserved a director’s commentary this film is it.

The ending takes place in pleasant times and without giving too much away, a Black Panther looking brother gets his revenge on whitey…..AND IT IS AWESOME! Over the top and totally justified. A violent form of collecting reparations for slavery. The scene is really only a fantasy but one worth fantasizing about.

This is a difficult film, the material is harsh and not handled by sensitive hands. It is a film you are not likely to forget and that is reason enough to check it out. Not a film to be shown in a public school classroom for Black History Month.