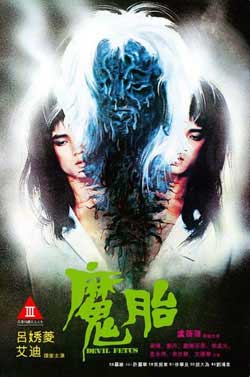 A monster preys on innocent victims.

Well, I quit my scumsucking job that I hated with the whitehot intensity of a thousand suns so I have more time to devote to watching movies and doing reviews for the best Horror website on the net! And here I am with DEVIL FETUS! Thank you Mike! And Satan! Finally I get my hands on a HK movie that is a full on horror movie! Don’t get me wrong I enjoyed BLU JEAN MONSTER, INTRUDER, and DAUGHTER OF DARKNESS, but those were not excursions into the supernatural dark side that is DEVIL FETUS! They were entertaining, they were good, and they were pretty sick and perverted but they did not try to be scary and atmospheric in the manner that DEVIL FETUS is and actually DEVIL FETUS is JUST FUCKING INSANE!!!! It’s got some terrible effects and sometimes it does not make sense but it is entertaining as all hell!

Flash forward a couple of years and the story centers on the two little nephews who were watching their aunty getting impregnated by old Scratch, who are now young men. Also the daughter of the dead aunt comes into the picture, I don’t know where she came from or where she had been hiding they never explain this but I’m with it! Her name is Jojo and she strikes up a relationship with one of the brothers, the brother named Ken. Together Ken and Jojo go to burn incense for his dead aunty when Jojo knocks off the piece of paper that had the spell written on it that was keeping the Devil Fetus from coming into our plane of existence. One of the papers falls to the floor and burst into flames and the charred paper floats down from the second floor and it jumps onto the car Ken and Jojo and driving and when they get home the blackened scrape of paper jumps down the throat of Kens German Shepherd! But no, the nonsense does not end there, oh no! They have a big party where everyone dances very badly and they eat a cake infested with worms and a girl graphically throws up the wormy cake that she ate.

Then the Devil Fetus leapfrogs from the German Shepherd into Kens brother Wai. And the way it does it is hilarious and dumb but so cool! these red rings shoot out of the dead dogs eyes accompanied by what songs like a laser gun or a robot farting! And it just gets better! And normally I don’t like to give the plot of the movie away but there really isn’t much of a plot in DEVIL FETUS. It’s basically about a possessed Wai trying to impregnate his brothers gal Jojo with a Devil Fetus of his own. For this movie story, plot, and character development are not what important, what is important is the cheap special effects, gore, the monster, and the sheer outrageousness of DEVIL FETUS! It’s great, I love this movie after just one viewing and I was kinda down about quitting my job of almost 18 years but watching DEVIL FETUS managed to put a smile on my face.

I think that the film makers were trying to make a scary horror film and trying to just have fun making a movie; DEVIL FETUS must of had a micro budget and where they failed making a effectively scary horror film they excelled at creating a whacked out hilarious, what the hell is going on, freaky cult film. It’s so cult that no one even knows about it except for a select few and I am here to tell you about it! I do my research and I checked out some other reviews and all the ones I found hailed it as a faux masterpiece of extreme cheesiness, gore, slime, and just outright stupidity, but that’s the fun of DEVIL FETUS! In my opinion it really does come close to reaching the level of fun of EVIL DEAD 2: Dead By Dawn. Okay, maybe not EVIL DEAD 2: Dead By Dawn but at least EVIL DEAD Part 1. As well as movies like THE BEYOND and GATES OF HELL aka CITY OF THE LIVING DEAD. Not in the storyline or even direction but the feel and level of absurdity these movies have. Yes, it is that enjoyable!

Like I mentioned it has no budget but they still manage to throw all kinds of outlandish effects at you. There is the gore factor; it may not be a total gorefest but there is plenty of bloody flesh ripping scenes to please a gore hound like me. There is a face crushing that is really cool, the guy peeling his face off, and someone eats the guts of a dog! It’s got some pretty bad light show effects during a awesome battle between a sorcerer priest and the possessed Wai, and this scene is incredible! There is so much going on in this scene! there’s teleportation, flying, puppets flying and attacking the possessed Wai, energy beams being shot out of hands, it’s f*cking awesome! It had me giggling and smiling like a moron!

There is a slimy demon creature that likes to rape women! Sure, it’s a guy in a rubber suit, but who does not love monster movies with a guy in a rubber suit? GODZILLA, SWAMP THING, CREATURE FROM THE BLACK LAGOON, OCTOMAN, Almost any BIGFOOT movie, (except SHRIEK OF THE MUTILATED!), and so many others I can’t think of right now.

But there is something about DEVIL FETUS that bothered the people that wrote reviews about it. The animal killing. I love animals and I hate to see them brutalized, but I have most of the cannibal movies, and some of the mondo movies, and other movies where they kill animals and they kill animals in DEVIL FETUS. I think they really killed the German Shepherd and they kill a eagle. Yes, a glorious and beautiful eagle was destroyed for DEVIL FETUS! I have mixed feelings on killing animals in movies, but I still eat meat and you probably eat meat and I own these movies but I still don’t like it.

So DEVIL FETUS is a must see, but the problem is where can you get it? I don’t know! You can’t run on down to Blockbuster, excuse me, you can order it from Netflix, or Amazon, or go to BEST BUY and I doubt there is even a U.S. DVD version of DEVIL FETUS, and forget about tracking down a VHS copy. There’s gotta be some bootleggers somewhere that can hook you up with a copy and I think you should start hunting down a copy today. I think this will save you. DEVIL FETUS is exactly what you are looking fore, it what I was looking for and I didn’t even know that I was searching for DEVIL FETUS but now that I know about it I can’t live with out it! It’s re – charged my batteries for liking these kinds of movies and searching for them and shelling out my hard earned money for them. Which is hard these days since I don’t have a job but I ordered some movies recently because I have devoted my life to this stuff. If you are as enthusiastic as I am about these kinds of movies then you really should seek out DEVIL FETUS!