Home | SCREAM FACTORY Gears up for A Load of New Releases

SCREAM FACTORY Gears up for A Load of New Releases

Sink your teeth into a pair of fangtastic vampire comedies, Love At First Bite and Once Bitten, on February 10, 2015 for the first time on Blu-ray! 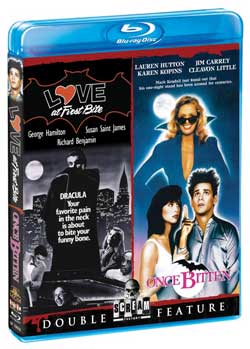 George Hamilton is possibly the tannest vampire in screen history in 1979’s Love at First Bite. When Count Dracula (Hamilton) is forced out of his castle to make room for an Olympic training facility, he relocates to New York City in search of discos, blood banks, and the fashion model who just might be the girl of his dreams. Will the Count take a bite out of the big apple — or will its mean streets take a bite out of him? Susan Saint James, Richard Benjamin, Arte Johnson, Dick Shawn and The Jeffersons’ Sherman Hemsley and Isabel Sanford also star in this outrageous romance about a guy who really loves the nightlife.

Jim Carrey is necking with a vampire in Once Bitten, a 1985 teen comedy also starring Lauren Hutton, Karen Kopins, and Cleavon Little (Blazing Saddles). When a vampire Countess (Hutton) seeks virgin blood, she soon discovers that it’s not as easy to come by as it was in the good old days! When she crosses paths with the still-virginal Mark Kendall (Carrey in one of his earliest screen roles), it’s a race against time to get to him before he gets it on. Once Bitten is a totally 80s teen vampire flick where the bloodsuckers don’t sparkle, but the comedy most certainly does.

Get ready for high-definition haunts and ha-has coming from Scream Factory on February 10, 2015!  This double feature of Vampire’s Kiss and High Spirits presents a pair of paranormal favorites from the 1980s, available at last on Blu-ray. Vampire’s Kiss includes commentary with Nicolas Cage and director Robert Bierman.

Teetering on the edge of sanity, volatile literary agent Peter Loew (Nicolas Cage) tries to find purpose in his life through a cutthroat work ethic and a hedonistic night life. But when an encounter with a mysterious beauty leaves Loew convinced that he is turning into a vampire, his behavior turns positively outrageous. 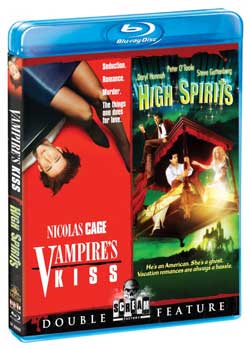 Daryl Hannah, Peter O’Toole,  Steve Guttenberg, Beverly D’Angelo, Jennifer Tilly, Peter Gallagher and Liam Neeson star in this hilariously haunting comedy!  When a castle-turned-hotel owned by Peter Plunkett (O’Toole) falls on hard financial times, he comes up with an idea to turn the place into a tourist attraction by billing it as Europe’s most haunted castle. But just when it seems he’ll have to give up the ghost, some real phantoms show up — and they’re none too thrilled about being exploited.

Diane “Blaze” Sullivan, the host of a nationally televised punk-rock show on New Year’s Eve, is receiving calls from a mysterious killer who tells her of his plans to off someone at midnight in each of America’s major time zones… and she will be the last.

Starring Roz Kelly (Happy Days), Kip Niven (Magnum Force), Grant Cramer (Killer Klowns From Outer Space), Louisa Moritz (Death Race 2000), Taaffe O’Connell (Galaxy Of Terror) and Teri Copley (We Got It Made), New Year’s Evil injects an “intimate and refreshing viewpoint into what was once a tired old scenario” (Andre Dumas, The Horror Digest)…and then takes you on a non-stop thrill ride of unmitigated terror! 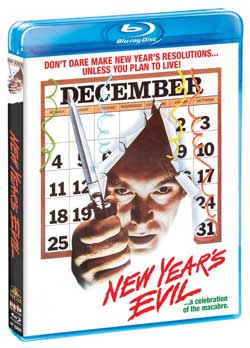