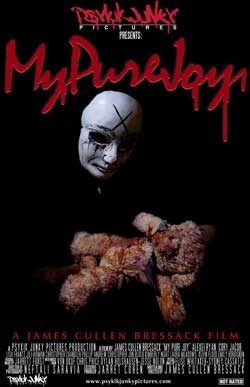 On the outside Adam appears to be a normal teenager, but underneath…his mind has been so rotted by trauma from his past and the gory films he watches, that he has blurred the lines between reality and pretend! This prompts Adam to start killing people in similar ways to films he watches, making sure to put his own little spin on it

There is a contemplative, perhaps brilliant film lingering beneath the ugly façade of “My Pure Joy” that writer/director James Cullen Bressack often touches upon in his feature-length debut.  Since, he has remained on the cusp of widespread recognition with his projects, releasing the uneven yet intriguing “To Jennifer” and his home invasion shocker “Hate Crime” last year.  Both were of the found footage milieu, and he successfully used the technique to his advantage. 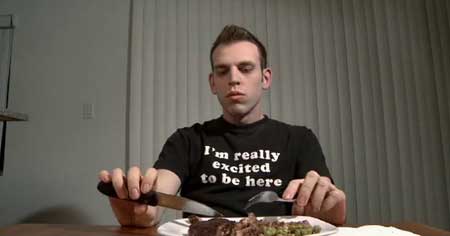 Though not within the same dubious subgenre, “Joy” serves as a direct predecessor to the two latter efforts.  Written when he was just eighteen, it works from within the confines of a young man’s angst-ridden id, as is the case with “To Jennifer.”  Also serving up a host of grisly murders during its run, it demonstrates the same unflinching fascination with violence that “Hate Crime” embraces to punishing effect.  Though flawed to the point of distraction and populated by performers who can’t hold a candle to the lead star’s capabilities, there is no denying the presence of raw talent in this first endeavor.

Alexei Ryan shines as Adam, at first glance the typical high school stoner.  He spends much of his time hanging out with friends Chris and Steve, speaking rudely to his widowed mother, and obsessing over horror films.  You know, regular teen stuff.  What marks Adam as a different sort is that he also happens to be a serial killer, playing out his fantasies of death and dismemberment on unsuspecting neighbors.  We open with an extended sequence of his handiwork, as he butchers a family of four within their home.  Wearing a mask, he stalks the innocents one by one, reveling in each kill.  A loving nod to you-know-who, the screen dissolves to black-and-white as he approaches the showering matriarch.  This grisly spectacle pulls few punches, and I’m confident any restraint was budgetary, not artistic. 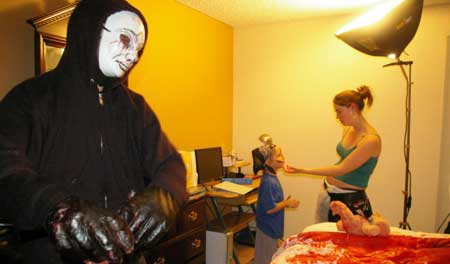 The juvenile smack talk between Adam and his cohorts serves as welcome relief from the initial jolt, though these scenes wear thin quickly.  At first engaging and serving up purposeful insight into Adam’s psyche, the presence of Chris and Steve begins to feel like filler in a piece that, at one hundred minutes in runtime, doesn’t require any.  JD Fairman (a low-rent Clark Duke) and Christopher Chandler play Adam’s comrades with natural charm, but clearly struggle in keeping the energy aloft when their dialogue approaches repetition. 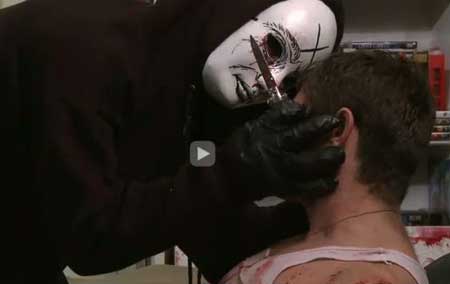 An altercation with the boyfriend of his secret crush leads Adam to the no-brainer selection of his next kill list entries.  Upping the stakes considerably from the preceding gore, these moments of torture play out entirely in real time (much of “Joy” does), and could have been shot as an unbroken take if not for the necessity of bait-and-switch editing during a finger amputation.  Given the throwaway nature of the victims, the scene is much more emotionally resonant than it has any right to be. Reducing the bully to a bawling, terrified child is normally comic fodder.  Here, it’s tough to not feel sorry for the poor douche. 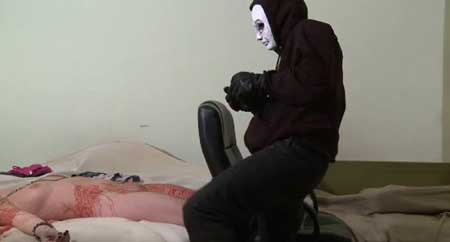 Adam’s adoration for vicious genre flicks plays just as large a role as any tangible.  We learn that his infatuation with the cinematic macabre was inherited from his deceased father, and “Joy” poses a nature vs. nurture query that it cleverly refuses to answer.  It hangs the suggestion out there as a metaphorical carrot for the audience, almost like an intellectual red herring, if you will.  Bressack takes an objective stance and only hints at possible arguments, handling the issue as an existential quandary, not merely a case of “yea” or “nay.”  Can overexposure to these darker corners of entertainment push one into madness?  If “madness” refers to the urge to pursue a doomed career in low-budget film making and/or give up hope and become a snarky critic, I’d say yes.

The return of estranged older brother Joseph, while imperative to Adam’s descent into full depravity, throws the film into an imbalance that it never quite recovers from.  The terse reunion dinner, erupting into an argument that seems to never end, is the first of many false notes “Joy” strikes in its final third.  Major fault lies in the supporting performances, though a fair chunk of blame should also be handed to the melodramatic pap the script forces them to spew.  Lisa Frantz as Adam’s mother and Cory Jacob as big bro Joseph struggle to maintain a level of believability in even lighter exchanges, so it’s needless to say that the enterprise damn near unravels in the few minutes they are the only two onscreen in the midst of crisis.  By the time Joseph reads from Adam’s journal aloud, I was yearning for Chris and Steve to reappear and bring the narrative to a screeching halt with a sluggish movie debate.

Luckily, the main assets at play here far outweigh any thematic hiccups and obvious technical inexperience “Joy” wears on its sleeve like both a confession and badge of honor.  Ryan truly is a blessing as Adam, creating a unique individual and never losing sight of character when forced to take him to challenging places.  It’s no surprise Bressack has remained on the scene since, given the amount of potential on display.  As previously stated, the rookie mistakes are plentiful, most notably the subpar audio and a criminal inattention to detail when shooting.  I lost count of how many times I caught someone breaking the “fourth wall” (big no-no unless it happens to be found footage) and stealing a furtive glance at the camera.

These are quibbles applicable to nearly all freshman efforts, and must be put aside in order to fully appreciate the experience.  I used to complain to my father for his insistence on being present for opening night of every stage show I was involved with, knowing there would still be kinks to iron out and the production would lack proper polish.

“I like to see the c**k-ups,” Big Bob would explain.  “They make me feel more like I’m a part of it.”  Motion picture debuts have always had that same effect on yours truly, and “My Pure Joy” invokes that sentiment wonderfully.  Now please, someone get this dude a real production crew, because his garish practical lighting is killing me.