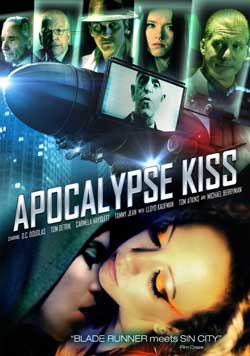 In this futuristic science fiction thriller, government security agent Jerry Hipple has been unsuccessfully tracking the city’s most infamous criminal The Red Harvest Killer. When two nomadic lovers, Katia and Gladys enter the city the death count rises and are being credited as Red Harvest killings. Obsessive compulsive Adrian, the actual Red Harvest Killer becomes furious that the sexy serial killing duo are grabbing media attention under his alias. Not only does Adrian attempt to reclaim his rightful reputation but he also decides to cleverly aid his detective counterpart through the case. All the while, killers and victims alike are unaware the world is about to reach an abrupt catastrophic ending.

There are many interwoven plots at work in Apocalypse Kiss. First we have the setting of a dystopian future in which the combined world of Orwell’s 1984 and Gilliam’s Brazil is ruled by visions of Michael Berryman (The Hills Have Eyes) promising medication and peace for all. Who wouldn’t take the words of this man as law? 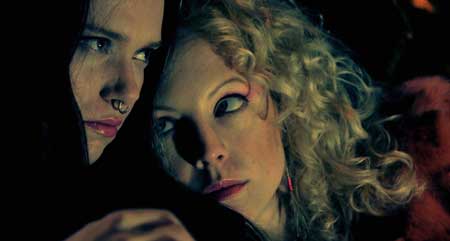 The Red Harvest Killer’s narcissistic murder quandary, while being hunted by the Mickey Spillane like government agent/detective Jerry Hipple, played by Tom Detrik (12 Monkeys), is the more interesting and entertaining story. D.C. Douglas is not a stranger to being a creepy guy. But as Adrian, aka The Red Harvest Killer, he ups the ante in an American Psycho performance with a Dexter twist. Adrian is no stranger to the finer things in life but despite his OCD and penchant for fine suits he chooses to live amongst the dregs. Hipple is no stranger to the dark side of the streets but is dedicated to being the protector of dregs and elite alike. In this way, our tortured hero and evil villain are polar opposites. Hipple see’s his job as something he has no choice but to do, he even scorns the idea of popularity. He maintains his “not worthy” attitude with morose noir monologues. 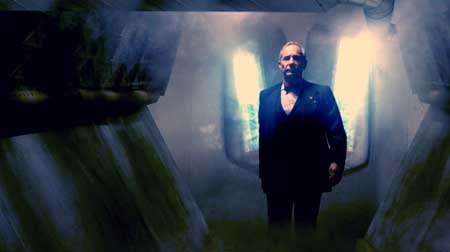 Adrian, on the other hand, takes great delight in the position he has chosen for himself. He is a child in a toy store that is limited only by his need for attention and the joy he gets out of torturing his victim with clever discussions before dispatching them. My favorite of these scenes is when his victim, that originally refused to parley with Adrian, finally chose to correct his sentence structure. “Wrapped up on a table and you correct me?” Un-offended, Adrian gives him a suffocating death before retiring to the daily news and a bowl of Ramen. By the way, the award for the first time an e-cig appears in a movie goes to Apocalypse Kiss! 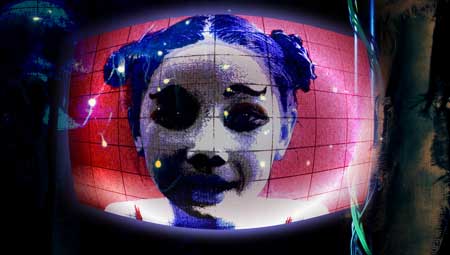 The correlating story line involves Carmela Hayslett (best known for horror hosting the mini-series Roxsy Tyler’s Carnival of Horrors as “Roxsy Tyler”) as Katia, and relative newcomer Tammy Jean as Gladys. The girls’ Natural Born Killer’s of the future is a welcome distraction contrasted against the “day in the life” of our new favorite serial killer. Their lesbian relationship coupled with criminal survival gives us our best understanding of the segregation of the city this all takes place in. East (the dregs) versus West (the elite) in a struggle for survival and control. This a world in which an elite criminal, like The Red Harvest Killer, can move around freely but has to work hard to make his work rise above all the other murders. A challenge that he takes personal, so much so that when he learns of lesser murders being attributed to him it unhinges him to the point of callousness. 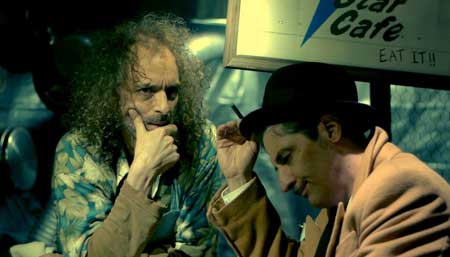 So as the girls traipse around the city, leaving some bodies of their own behind, the media has a field day attaching the new killings to The Red Harvest Killer. Its just like the media to spread misinformation, after all Berryman has been promising safety and drugs for all from T.V. screens all this time. But this also upsets proud Adrian because if they actually knew anything about him they’d know he had way more class than to just leave bodies laying around gutters. Besides, they’re taking the limelight off his actual brilliant killings, and that can’t continue. What’s a self absorbed serial killer supposed to do under these condition? Well, something genius of course, like steer the obsessive government agent that’s tracking him toward the false killers. Is it possible that plan could come together that would save the reputation of a serial killer, two lovers, an emo detective, and the world? Of course not! Obviously everyone is headed to a much more catastrophic conclusion that only the apocalypse could bring, with a kiss. 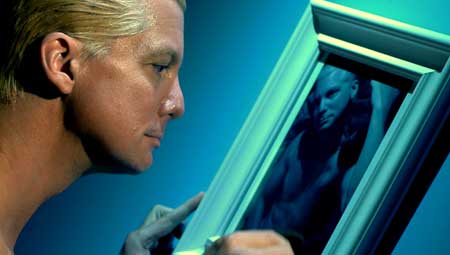 As a whole, Apocalypse Kiss is a very busy movie and feels like the product of a brainstorming session that started with “what would happen if a serial killer in the dystopian future got upstaged by a couple of lesbians trying to survive while the media and government tried to brainwash everyone into submission while covering up the actual apocalypse?” Honestly, the film would have been fine concentrating on the first half of that statement and the rest kind of muddled the story. But one should never do anything half way. There are cult classic cameos galore besides Berryman to enjoy. Lloyd Kaufman as The President (of course), and Tom Atkins (Maniac Cop) as government police Capt. Vogle graciously top the list. As for the rest of the players D.C. took over the show. Every moment on screen is gold, diabolical, and darkly humorous. Though obviously low budget, it is a Midnight Releasing film after all, it is a future we’ve see before and can identify with, and I wouldn’t be the first to declare an undying love to Asylum style camp and ridiculousness.

Watch Apocalypse Kiss now on NetFlix, iTunes, etc and try not to get too caught up in the charming smile of the The Red Harvest Killer. It didn’t work for me!