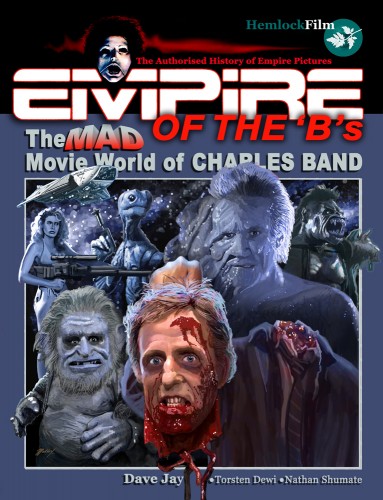 This is a wondrous book which needs to be purchased with the utmost urgency. An expansive, comprehensive and utterly engrossing work of cult film perfection, this is a definitive work on one of genre cinema’s greatest – and most debated – characters.

Covering the creation of the fabled Empire Studios, their own films and their pickup titles, it is an indispensible work which anyone with even a passing interest in Band and his career and films will find fascinating. Including masses of archival material and interviews with the people involved in the films themselves (including several chats with Charlie himself), this fully authorised biography of the Empire years needs to be devoured in great chunks.

Packed with posters, production stills and other ephemera throughout its meaty 377 pages, each film in the Empire pantheon is covered in detail. Each film is reviewed in full, along with superb morsels of trivia peppered throughout each piece. It really is a delight for genre film fans, such is the depth of research an the openness of the interviews. It’s not a sycophantic book in any way, though.

While the various people involved in the book and Dave Jay himself clearly love Band’s movies, they are bluntly honest when it comes to talking about the limitations of the films, the budgets and indeed their own relationships with cast and crew. That frankness only adds further value to what is already a seriously impressive book for both Charles Band’s fans and his detractors. In addition, Charles comes across as very likeable, if a little misunderstood by the masses.

Examinations of films like Tourist Trap, Metalstorm: The Destruction of Jared-Syn, Laserblast, Ghoulies, Creepozoids, Slave Girls From Beyond Infinity, Re-animator, From Beyond and many more are sure to entertain and inform, as is the extra chapter on Wizard Video.

The only drawback for some readers is the fact that the book is only currently available in the UK, but it is available to order from the publisher at Hemlock Books (however, a very limited quantity are available in the US via the Full Moon website).

I leapt into it as soon as my pre-ordered copy arrived, and I’m thrilled with it. I do suggest you check it out, as it’s a fantastic labour of love which has taken essentially a decade to compile, and aside from a few typos littered here and there, it’s pretty much a new benchmark in how books about the movie business should be written. An absolute, unabashed pleasure from start to finish.

Charles Band on the book…