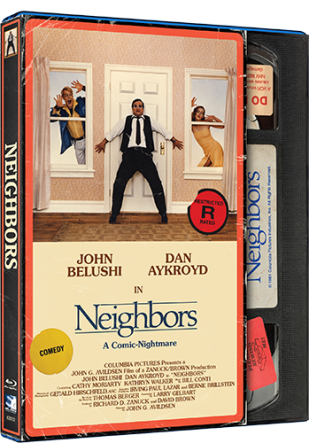 A quiet man’s peaceful suburban lifestyle is threatened by the new, obnoxious couple that moves in next door.

One of the rare cult gems that, to this day, has never really been given the respect that it deserves. It took forever for it to get picked on DVD, which means it probably will take even longer for a blu-ray to materialize. Those who lived in the 80’s will most likely remember this one as being one of John Belushi’s better films. Despite that…..it is fellow actor Dan Aykroyd who really makes the film what it is. 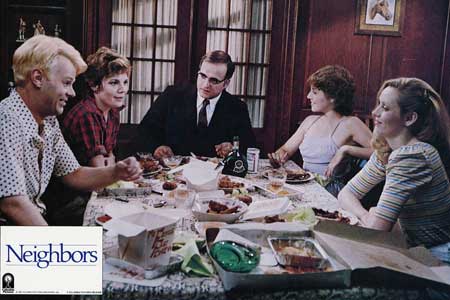 The film itself is a quirky dark comedy that inspired later films such as “the Burbs” and “Duplex”. In short retrospective, it is a simple film about a couple who are suddenly inundated with some extremely bizarre neighbors who have rented the house next to theirs. The film was directed by John G. Avildsen and was released by Columbia Pictures in 1981. The film is easily regarded as a cult film that has managed to stay off the radar for many years. For fans of dark comedic movies with a “Twilight Zone” kind of flair to it,…..”Neighbors” is a must see. 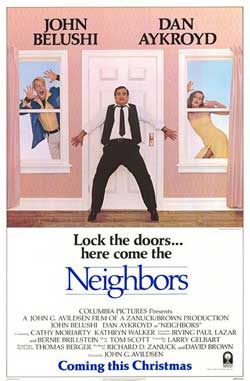 “Neighbors” addresses a simple idea that seems to pop up as the underlying base for alot of horror films these days. This idea is that surburban life is not always as “ordinary” as one might think (and can change in an instant) 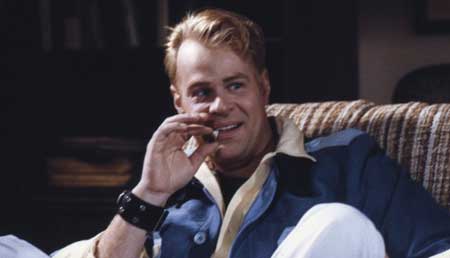 Earl Keese (John Belushi), a middle age suburbanite lives comfortably with his wife Enid (Kathryn Walker) who occasionally complains about the quality of the steak they buy. Though as it would appear, they live a pretty boring life, that culminates in discussions about news articles they read for the day. Things for the Reese’s are about to change for the strange. The 2 of them reside at the house with their teenage daughter Elaine.

Two houses sit at the end of a cul de sac placing them oddly into an isolated next-door-scenario. As the Keese’s are about to sit down to dinner, they notice a car parked next door in the driveway of the once formerly empty residence. It only takes a a few minutes before Earl is pulled from his chair to the sound of a doorbell. This begins the wacky introduction to the new neighbors Vic (Dan Aykroyd) and Ramona (Cathy Moriarty) who have just arrived as new residents. 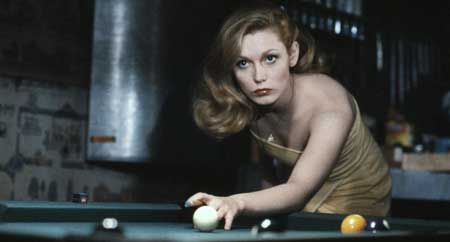 Ramona instantly begins trying to seduce and charm Earl while Vic presents himself like a traveling salesman making himself instantly at home at the Reese’s house. Earl is the first to suspect things from this strange couple, while his wife Enid seems instantly smitten by their charm and friendliness.

As things progress in the film, Earl manages to sink the neighbor’s car in the nearby swamp while questioning the motives of these 2 who seem more interested in pranx and hi jinx than anything else. Needless to say, it’s the character interplay here that makes for a great screen experience setting the stage for actor Dan Aykroyd to be his best bizarre self. Actor John Belushi (who is usually the more extroverted) is portrayed as a simple man with morals and concern for what kind of people he is soon to be stuck with living “just” next door.

Things begin to change for the Reese’s as they are subjected to Vic and Ramona’s eccentricities, namely a much needed boost of excitement that has been missing from the couple’s lives for years. In a sense it’s a story a about awakening that occurs when the influence of those more “lively” are suddenly injected into one’s circle. 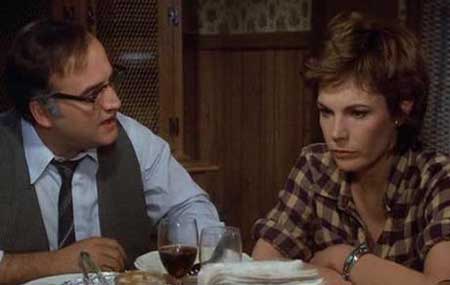 This awakening which starts off as a form of suburban warring flips the tables as Earl becomes enlightened prompting him to make some drastic changes to his life. The film while being a comedy does tend to keep things on a darker rhythm in the same way as you might extract from films like “The Cable Guy“. 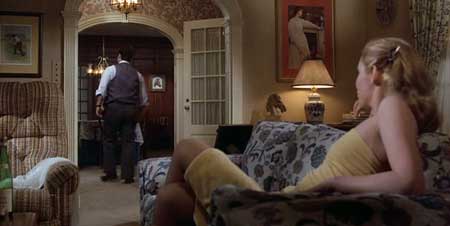 “Neighbors” was based on a novel by author Thomas Berger. The team of Belushi and Aykroyd, were most noted for their teaming up in the film “The Blues Brothers”. Due to their perceived collaboration presence, “Neighbors” was in fact a “hit or miss” among critics and fans. 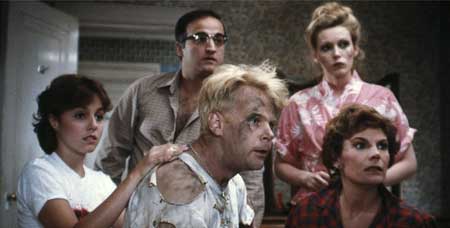 This offbeat humor might have been a bit too early for fans to fully embrace, though there is no denying the lasting impression the film leaves with you. It would be films like “Falling Down” that again based itself on a suburban middle aged man taking on a drastic change of attitude. Unfortunately “Neighbors” was John Belushi’s last movie before his untimely death in 1982. The movie would fare well in cult circles as it made its way to VHS. It would be many years of digitized copies floating around before an actual DVD was released into production. The film marks one of the offerings from these 2 comedic genius’s at the peak of their careers.

Neighbors is now available for first time on bluray per Mill Creek Entertainment!