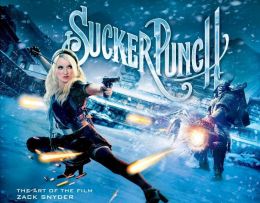 It only makes sense that such a mesmerizing movie be represented with such an equally memorizing book. “Sucker Punch – The Art of the Film by Zack Snyder”, a release by Titan Books follows in the footsteps of their other great art book releases such as “The Art of Terminator” and “The Art of the film Watchmen“.

Hard cover, bound in full color, this book shines with vibrant stunning images from front to back. Whether it’s the film’s imaginative set designs, the story’s bizarre creatures or simply the sexually elegant outfits worn by the film’s characters, the book celebrates its production’s creativity by laying out each piece from concept to completion across its 256 pages.

Fans of the film, will delight in several quality shots of the actresses in action, in full makeup, and usually in some sort of confrontation. Never was sexiness and science fiction so well presented as it is in this imaginative film. Readers of the book will learn about the elaborate planning details that went into each piece from weaponry to architectural embellishments.

The book contains several shots of the conceptual outfits proposed down to the final cut versions for the film. The characters themselves are presented with details about how they contribute to the story and what strengths they bring to the table. Babydoll, Amber, Rocket, Sweet Pea, and Blondie are showcased within adding to the bonus of complete full length 2 page spreads.

“Sucker Punch – The Art of the Film by Zack Snyder” contains page after page of high quality photography, illustration, and 3D model renderings. The book chapters each have short introductions keeping the brunt of the book focused on the film’s raw imagery. Color tones here are consistent matching the mood of the film perfectly.

“Sucker Punch – The Art of the Film” takes you thru the film’s details. Included are sections on “The Temple”, weapons used, “The Cathedral”, Giant killer samurais, British soldiers, Orcs, zombies, Meka, The Bunker”, “The Bomber”, “The Castle”, the dragon, “The Train”, “The City” and of course the film’s central location, “The Theater”.

The girls are presented in their various costumes. Several ideas are demonstrated as we work our way into those memorable posters that helped fuel the marketing campaign. If that wasn’t enough, the book ends on the lobotomy illustration that was used in the movie.

Overlaying the whole production is this unique way of presenting the brothel and its entertainers. We are taken from fiction to reality to fantasy as the artwork seamlessness blends one reality into the next (the film’s 3 layer foundation).

It’s a great visual showcase of everything “Sucker Punch” presented in a sharply rich color palette over high quality paper. You can certainly appreciate the book as a standalone even “without” seeing the film.

In all, its a great book to own and one that guests will sure to want to look thru time and time again. If you can muster up an order, I highly suggest grabbing some of the other books mentioned in this review that go hand and hand with format, sizing, and professionalism.