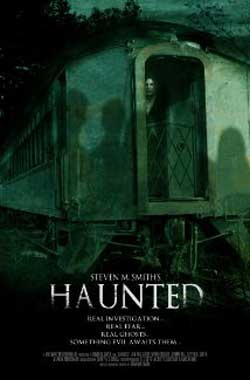 If you Like “GHOST” reality shows, you should get a kick out of this one… REALM OF HORRORDare you venture into the most haunted place in the world. A TV crew will film a paranormal investigation and obtain evidence that proves we are not alone. Something Evil awaits them! They will all discover the truth, that we are not alone.

I have a deep, dark secret that I’m going to confess to the world.  By “world,” I mean the two friends who begrudgingly read my meandering drivel.  The relentlessly beaten dead horse that is the found footage sub-genre still carries the potential to frighten the bejeezus out of me.  There, I said it.  Being one who startles easily (exposure to horror films at a young age may have contributed to this condition), I’m still a sucker for a good jump scare.  Even the hysterically atrocious “Bell Witch Haunting” from a few posts back had a “gotcha” moment or two buried beneath its low-rent shenanigans.

It would take a pretty dull and wrongheaded foray into this particular territory to lose the attention of yours truly.  For a prime example of such an atrocity, look no further than “Haunted.”  Essentially a British “Grave Encounters,” we follow the crew of a ghost hunting reality series (entitled, ironically enough, “Haunted”) during the latest filming.  A unique aspect of this not-so-unique premise is that the current episode entails a cursed train station, as opposed to the now-perfunctory abandoned institution or sprawling suburban interior.  Another distinct touch is the program’s core gimmick, that six contestants (four female, two male) are along for the investigation, having won a contest for the privilege. 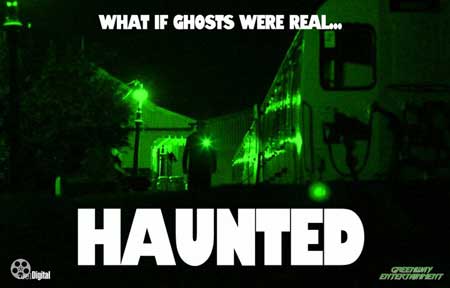 Any attempt at creativity screeches to a halt at the set-up.  As the chosen half-dozen enjoy their limousine ride to the isolated Essex locale, we are provided past exposition on site by host Vivien Creegor and historian Laura Penneycard.  A tragic derailment in 1959, which led to the station’s closing, was blamed on employee Richard Temple, who disappeared before he could be brought to sentencing.  The building now serves as a museum, displaying railroad memorabilia from across Europe.  A second tale of a boy in the early 1900’s who’d fallen onto the tracks and was crushed is also introduced, though to what purpose I’m still scratching my melon over.  Once the medium (because we’ve just gotta’ have one) Jon-Paul Gates details both stories nearly verbatim, the child’s death is never addressed again.

These tedious exchanges are classic Tarantino banter compared to the discussions held in the limo en route.  I sincerely hope every word out of the leads’ mouths was improvised, because I’ve lost a little faith in humanity if writer/director Steven M. Smith typed any of this shinola and then had the audacity to hit the “Save” button.  They share a couple of tame ghost stories and briefly debate the dangers of Ouija boards, but it’s inconsequential blah-blah existing only to fill time, since we learn nothing about any of these people or their backgrounds.  All of the actors use their real names, which makes it that much more difficult to tell any of them apart.  The two blondes are so identical in features and hairstyle, by the midway juncture I’d forgotten they were separate individuals. 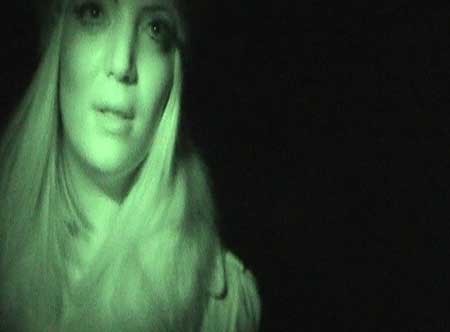 After a mercifully succinct meet-and-greet, the cast and crew (including Smith himself as the director, of course) break into two factions, one the men and the other the women.  Whilst walking to the museum, Jon feels a heavy presence on his back, which forces him to the ground (slowly, not in a cool way) and immobilizes him.  As his cohorts offer pointless solutions that range from covering him with a blanket to fetching tea, Jon utters the most unintentionally funny line I’ve heard in a bad horror flick this week.  Unable to budge a muscle and in pain, he states very calmly, “He feels obviously I’m responsible for this.”  That’s good stuff.

Once Jon’s encounter is recanted to the ladies like he was merely overtaken by a mild toe cramp, the team splits again, this time by no discernible segregation.  One group walks the tracks towards a shape on the platform ahead of them, convinced they see a person.  The lighting was so atrocious, I honestly couldn’t even tell if I was supposed to be looking at a platform, let alone any movement upon it.  Coincidentally, this also happens to be the very scene in which “Haunted” took a steaming dump on any tolerance I had remaining.  At a point during the sequence (the same shot happens later on as well), the camera cuts for a quick second to one of the two blondes whom I thought were only one blonde.  Looming behind her and rocking the pancake makeup is a tall, white-haired gentleman.  The person holding the camera screams, “Sweet mother of Jesus, who is that dude?” and everyone high-tails it the hell out of there.  Sounds reasonable. 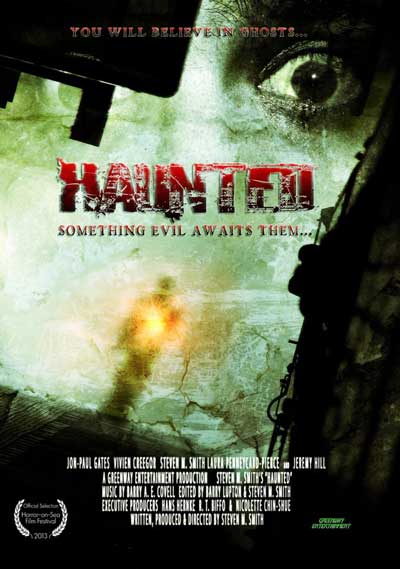 Except, that last part never happened.  In both instances, the appearance of the specter (or an aged Richard Temple, it’s never explained) isn’t acknowledged by anyone present, and it’s spliced in almost as a post-production afterthought to beef up the slower stretches.  Or I should say, “slower stretch,” because the 83-minute run time technically only counts as one.  Now, it’s completely understood that the boundaries of the found footage conceit require a little pushing occasionally to keep things popping, but this was brazen contempt for the fake medium Smith and company are exploiting.  Inexcusable.

It isn’t until the final five minutes when the running and screaming and dying occur, which is just as incoherent as expected.  Also, there might be a twist at the end, it was hard to tell through the amateur hour camera work and my building nausea.  By then, if you have the slightest rat’s ass of a concern about what happens, you must be an investor in this movie.  That being the case, I hope you didn’t put all your eggs into the basket of incompetence that is “Haunted.” 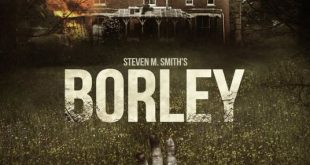 The Haunting of Borley Rectory (2018) 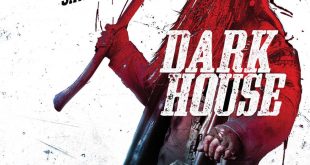 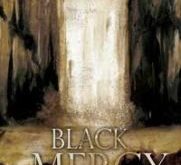