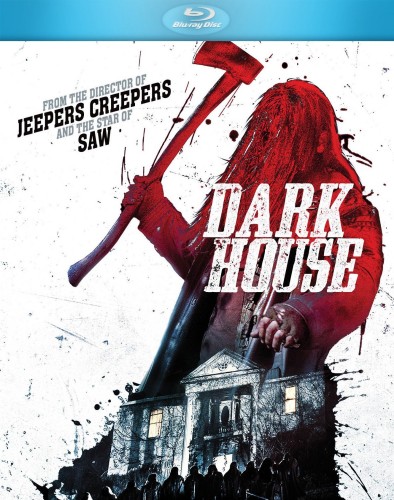 When Nick Di Santo learns that his father is not only alive but can possibly reveal the origin of his son’s dark gift, he sets out on a trip that takes him to an abandoned mansion he thought only existed in his childhood imagination.

I’ve never been much of a Victor Salva fan. I enjoyed the first JEEPERS CREEPERS but couldn’t make my way through the sequel. His film ROSEWOOD LANE was horrible but I was shocked to find his latest outing DARK HOUSE to be a solidly entertaining and creepy little film. He takes a cast of relative unknowns, with the exception of genre veterans Tobin Bell and Zack Ward, then delivers a tightly wound tale with several twists, colorful characters, and an axe wielding mob of angry ghosts. 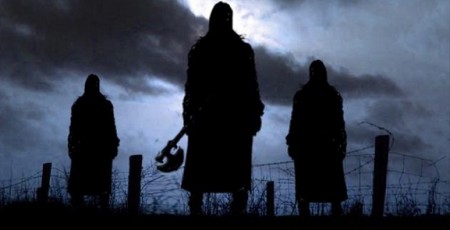 The movie falls just a pinch short from being great since there are several moments which drag on for far too long. Salva grabs a few ideas from past genre films and mashes them together in a film which is almost always entertaining and might just give you a few goosebumps.

It’s Nick Di Santo’s (Luke Kleintank) twenty third birthday and he’s making a special trip to see his mother who he hasn’t seen in years. She was committed years ago to spend her time in a mental institution. Nick feels it’s time to learn something about his father but she is too far gone to offer him any answers which may make sense.

Later that night he meets Eve (Alex McKenna) and the two quickly fall in love. Nick has a gift (or curse) and can vividly see how someone will die if they have a violent death just by touching them. He’s afraid to touch the ones he loves because he doesn’t want to know. After his mother dies in a mysterious fire at the hospital, he inherits an old mansion out in the middle of nowhere.

He along with his friend Ryan (Anthony Rey Perez) and the now pregnant Eve head out on a road trip to see the house and maybe Nick can learn something about his father. Once they arrive in the small town, they learn the house was washed away in a flood years ago. But there is a legend which says the house was hit by the flood and moved deep into woods. The three of them are determined to find it but what lies in wait for them when they get there will change their lives forever.

The film works best during the first and third acts. The characters are introduced in an interesting fashion and we don’t have to wait too long to get into the weirdness. The final act gives us a satisfying conclusion and the final twist was really imaginative. The cast is believable and it’s always a pleasure to see guys like Ward or Bell pop up. The film is light on gore but a few moments do arise and may surprise you. The axe wielding maniacs hop along, crouched low to the ground, and hurl their axes. Pretty creepy design and my favorite idea in the film.

The only real issue with the film is the second act drags a bit. If the time could have been taken to tweek and trim it just a bit, the film would have been much tighter. Hopefully this film ends up being a success for Salva since it seems as if he has been trying forever to get his final entry into the JEEPERS CREEPERS series off the ground.

This film proved to me that he still has a passion for the genre and he deserves to tell that final story. He has found the perfect writing partner in Charles Agron. This is his first foray and it seems like the two of them really worked well with one another. You couldn’t ask for a better picture from the Blu-ray though it lacks special features. It does include a short behind the scenes feature which is something. DARK HOUSE may not be perfect but it’s far better than most DTV features as of late. This is a return to form for Victor Salva and I hope to see this streak continue. ***1\2 (out of 5)

Dark House is now available on bluray from Cinedigm
Dark House will also be coming out this Friday in limited theaters!!