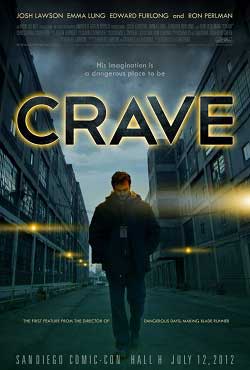 A depressed, oddball freelance photographer named Aiden escapes from his lonely existence fantasizing about saving damsels in distress and killing people that he thinks deserve it. After falling for his sexy neighbor Virginia (who he has a one night stand with) his life seems to have purpose. Thanks to her he thinks that he’s finally going to get the happy ending that he’s always wanted, but unfortunately she already has a boyfriend.  As his already unstable mental state continues to deteriorate Aiden decides that that little obstacle isn’t going to stand in the way of his happiness and getting what he wants.

Crave is a weird little flick and to be honest with you I’m not exactly sure how I felt about it. On one hand I thought that the film had an interesting (if unoriginal) premise. It reminded me a lot of Lucky McKee’s totally awesome and completely underrated masterpiece Roman and Adam Green’s equally excellent vehicle Spiral with a little bit of “The Secret Life of Walter Mitty” thrown in for good measure. I also liked the characters (for the most part) and couldn’t help but feel for them as they were all realistic and more than a little depressing to boot. On the flip side I thought that the movie itself was a little too long and just felt like it was missing something overall. While it isn’t really a horror film and I wasn’t expecting it to be an action-packed flick with one awesome death scene after the other when everything was said and done I just found myself craving more (see what I did there? Because the name of the movie is Crave. Get it? Oh, never mind). 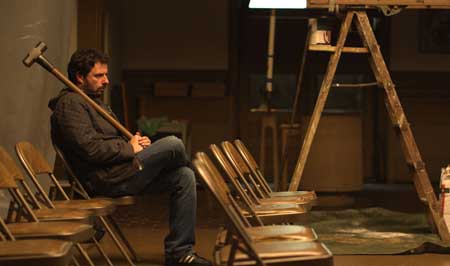 I thought that one of the biggest strengths of the movie was Josh Lawson, who plays Aiden. He really did an excellent job bringing the character to life and I think that a lot of viewers will be able to relate to him. He is a sympathetic character who struggles with loneliness, money problems, and a sense of self loathing to such an extent that the only way he can cope is by escaping into a fantasy world where he is brave and strong, everything that he is not in reality. Who among us hasn’t imagined ourselves as something that we weren’t to escape the troubles and overall shittiness of the real world? I know that I have and despite the fact that Aiden is a cowardly, awkward, and bizarre guy in general I still liked him and found myself rooting for him. I thought that Lawson did a stellar job in the role and that it character most likely wouldn’t have had the same feel had someone else been cast.  Emma Lung also did a very good job as Virginia (who I thought was equally depressing) and the two had great chemistry together. Since they did play off of each other so well I wanted their characters to hook up and live happily ever after because they both deserved to do so. Do they? You’ll have to watch and find out for yourself.

I also liked the tone of Crave as well. It had a nice bleak, depressing feel to it that went along nicely with Aiden’s personality. It isn’t a warm a fuzzy kind of movie and most of the scenes that take place will leave you feeling the need to slit your wrists as a result. I’m not saying that it’s a bad thing as the tone of the movie feels natural and doesn’t have a forced feeling to it whatsoever like other movies that try too hard to convey an overall bleak and hopeless vibe, but if you are into happy, positive movies (which I assume you aren’t since you are into horror and are reading this review right now) then this movie probably isn’t for you.

Even though I did like certain elements of it I have to admit that it suffers from a number of problems. As I mentioned earlier it is a little too long and there are many scenes and subplots that could have been taken out as they really don’t add anything substantial to the overall plot. I really didn’t care about the whole thing with Aiden blackmailing the man having the affair with the underage girl as I thought that it was going to play a major part at one point but it ends up coming to a head rather quietly and seemed a little pointless. The same could be said for all of the scenes with Aiden’s only friend, a police detective named Pete (played by the awesome Ron Perlman). Aiden and Pete’s scenes together run way too long and there are just too many of them. I get that they hang out and Pete shares words of wisdom with him and all that jazz, but much like the bit with Aiden blackmailing the dude I thought that something important was going to happen during one of these scenes but it never really did. This movie would have been a lot better had it been edited a little better and some of the unnecessary scenes were taken out to help it flow better.

I also didn’t care for the ending. I don’t want to give anything away but let’s just say that nothing is really resolved and the movie just basically ends without anything amazing happens. I know that some people may love the ending and could argue that it not only goes along with the tone of the movie and is also realistic but I have to disagree. I thought that it just felt like it was missing something (hell, I thought the whole movie did) and that something more could have been done to make the ending (and the movie itself) excellent.

Crave isn’t for every taste. It isn’t a horror film by any stretch of the imagination and could best be described as a character-driven piece or even a psychological drama. While I liked it to a point I also thought that it could have been a lot better for a number of reasons. I’m not saying that it is a bad movie because it is anything but, but at the same time I just wish that it had a little more substance to it as it had potential to be something special. Check it out if you haven’t seen it and are in the mood for something a little different.