Time for a bunch of scantily clad young women to get slaughtered again, and not a moment too soon.

ANCHOR BAY comes to the rescue with the release of SORORITY PARTY MASSACRE an indie shocker heading our way on Feb. 11, 2014.

An isolated town full of sexy college girls has a dangerous secret: one girl has gone missing each year for the last 20 years. A big-city cop, in danger of losing his badge, agrees to aid the town’s sheriff in investigating these unsolved disappearances. Quickly they realize that they are dealing with a psychotic killer whose brilliance has been twisted into a taste for terror, torture and sorority sister torment. But when this party gets started, who will graduate – and who will be held back?

Sound good to ya? I thought it would.

What’s on the disc you ask, just happen to have that info right here:

Check out the trailer, it’s a little NSFW so proceed with caution. 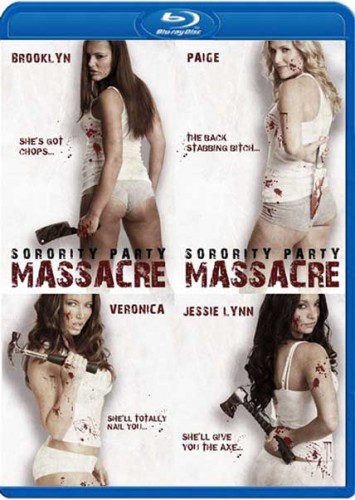