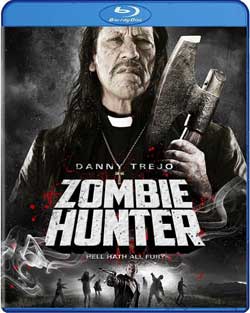 Zombie Hunter” follows the vengeful HUNTER in his journey through the post-apocalyptic, zombie-infested wasteland. Killing in the name of the family he lost, he teams up with a group of survivors and face the deadly mutations that challenge their survival.

I’m going to say this right from the start – this is a movie that should not be taken too seriously. The storyline is predictable. The characters are clichés. The dialogue is cheesy (at times so cheesy that it made me cringe!). The effects are far from spectacular. Can you guess what the killer drug was that turned everyone into zombies…Natas. That’s Satan backwards if you didn’t already realise, and that’s just one example of the lame ideas that were employed in this film. Even the crazy cannibal village that the group has to pass through is called ‘Dahmer’ – ring any serial killer bells with anyone? But one thing that I’ve got to give Zombie Hunter credit for is that it was fun. Typical B movie stuff, to be honest.

You don’t need to watch many zombie movies before the formula becomes obvious and Zombie Hunter is no exception. The plotline is the same every time. A lone survivor (in this case ‘The Hunter’) in a world full of zombies encounters a group of uninfected and together they try to find a way to escape the undead terrors that stalk them. The characters are always the same – a protective older sibling with an inquisitive younger sibling, a macho man who thinks he can take on the whole world, a blonde damsel in distress who usually gets her tits out, a weary old guy who is the key to their freedom, a mysterious guy still hurting over past mistakes and the fat apathetic guy who doesn’t understand the severity of the situation. It does get tiring seeing the same thing over and over again, but I feel that Zombie Hunter was trying to be tongue-in-cheek about it.

I thought that there was plenty of action here to keep audiences entertained, as well as a bit of comedy (and an extremely awkward sex scene!). Danny Trejo does his usual bit and smashes up some zombies – whilst topless, mind. To compliment the whole ‘satan’ thing that I mentioned earlier, you might find it interesting to note that Danny Trejo’s character was called Jesús and often speaks about good, evil and hell. Hmm…I think I see an underlying metaphor here. Perhaps not underlying though, but blatantly obviously shoved down our throats.

Plus there was all manner of weapons used throughout, gun, knife, bomb, chainsaw, you name it! I think my favourite was the zombie clown thing wielding the chainsaw. He was the lucky fella who got to chase the bimbo through the street and shove that thing right through her gut. One thing that I wasn’t too sure about though, was the introduction of the hybrid creatures – supposedly were the product of mixing the zombie drug Natas with steroids. This added an extra (and unnecessary, in my opinion) foe for the humans to beat. This is where the crappy CGI was most obvious and it didn’t seem to add anything substantial to the story. I feel like they were just thrown in there on a whim, just to seem more badass. 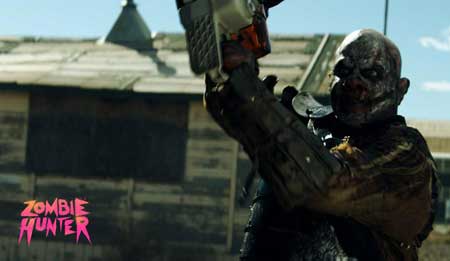 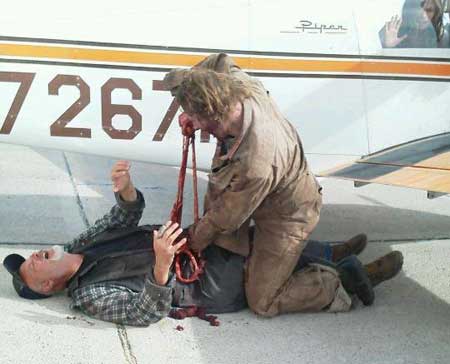 The entire film is narrated by the Hunter and I’m sorry but that voiceover simply had to have been a parody, else I’d have no respect for this film at all. It is the stereotypical gravelly, Clint Eastwood type of voice, or rather, someone trying to do their best impression of it. My advice is, leave it for Clint! The style of it did remind me a little of a film noir back in the 30s, but the lines were just the most unoriginal, ridiculous things that have ever been uttered on film. It was fine in the thirties when it hadn’t been done before but times have changed! Although, the fact that even some of the posters advertising Zombie Hunter have been done in an old-school type way, this was probably a deliberate choice made by Kevin King (director) to hark back to the days when this sort of film was more acceptable. 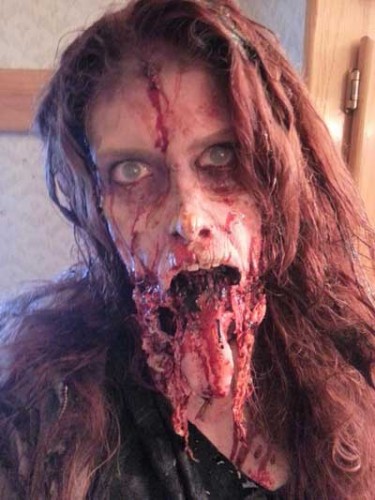 Having taken the time to look up Kevin King, it would appear that Zombie Hunter was his first ever film (which he wrote, produced and directed) which is actually very commendable. For a first try, I give him full respect for the movie he managed to put together. There are loads of flaws, yes, but overall it seems to work – it definitely wasn’t boring or frustrating to watch. It wasn’t scary either, but then I don’t really think it was supposed to be.

This is by no means the worst zombie movie that I’ve seen, however, it is far, far away from being the best either. I’d say that Zombie Hunter is more suited to those who are fans of Shaun of the Dead or Warm Bodies, than serious hardcore George A. Romero lovers or the likes of World War Z. By all means, if you want a light-hearted 90 minutes of silly zombie mayhem give Zombie Hunter a watch. Just remember that it is fairly cheesy, with a side order of cheese to go with that.