Home | Some Poster Art For After Dark’s MISCHIEF NIGHT

Some Poster Art For After Dark’s MISCHIEF NIGHT

Haven’t talked about anything from AFTER DARK FILMS for a while but today brought a nice new one sheet for the next release in their AFTER DARK ORIGINALS collection, this one titled MISCHIEF NIGHT.

Want to know what you’re getting yourself into? The synopsis tells all:

Kaylie is just like most other girls her age. She babysits, enjoys stealing from her parents’ liquor cabinet, and has boys who like her. The only difference between Kylie and other girls is that the boy who likes her wants to KILL her. On Mischief Night, the night before Halloween, Kylie’s true nature is revealed when she is attacked by a psycho who wants nothing more than to see her insides. 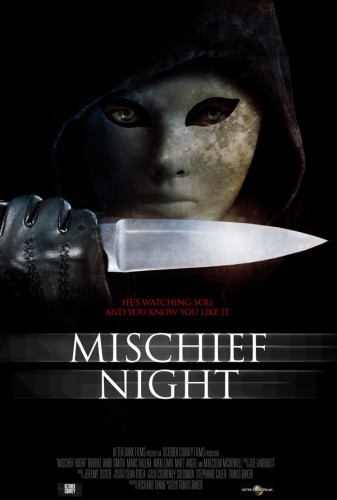 The film stars Brooke Anne Smith, Marc Valera, and Malcolm McDowell and will be the directorial debut for Travis Baker.

Here’s a few shots of the bad guy to stare at: