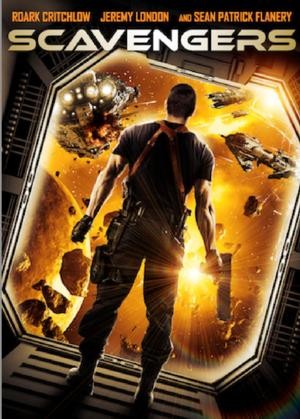 A team of space scavengers discovers superior alien technology that threatens the balance of the known universe. Hotly pursued by a rival crew of intergalactic mercenaries, the Revelator crew must fight through the deepest reaches of space to locate and protect the life-altering device.

You know, there are days when your pal The Black Saint just doesn’t wanna watch a movie. Days when the sky is blue & the sun is shining (I prefer grey skies w/rain but sometimes I take what I can get) & fresh air is preferable to the malodorous (but AWESOME) stench I’m so accustomed to. But I do have a job to do and when I get a screener in the mail I’m expected to watch & write a review for it. But I never signed up to be mercilessly tortured for 90 minutes and that’s exactly what I experienced while watching Scavengers, which has to have set some kind of record for sheer lack of action in a supposed sci-fi/action film.

Stop me if you recognize the plot: A salvage vessel happens along an alien artifact of immeasurable power but a group of space pirates have been intently looking for this very artifact and have been tracking it for a long time. Once the pirates realize that they’re too late in recovering their long sought after booty, they proceed to launch an all out assault on the salvage craft in an attempt to retrieve the powerful alien object for their own nefarious purpose.

Although the plot just screams “Been there, Done that“, it doesn’t mean that this can’t be entertaining. But writer/director Travis Zariwny has neither the script, cast or money to make anything near as exciting as the synopsis purports it to be. If anything, he succeeds in proving that my theory regarding people who want to make a film is valid. And that theory states that “Just cuz’ you have a script, camera, crew & actors doesn’t mean you have the makings of a movie”.

Starring Sean Patrick Flanery, Jeremy London and a passel of actors who are headed right back to their day jobs at BEST BUY, if Scavengers isn’t the absolute nadir of what passes for DTV entertainment today then I truly fear for the future of Netflix, Redbox & their ilk. I should’ve known that I had a clunker of titanic proportions when I heard the names of the characters: Data Ocean, Wake, Bar Fly, Jekel, Overkill, Black Devert & Nah Olos (Really?) are supposed to sound all cool and menacing but once you see the actors attempting to live up to their monikers you’ll know exactly what I mean. 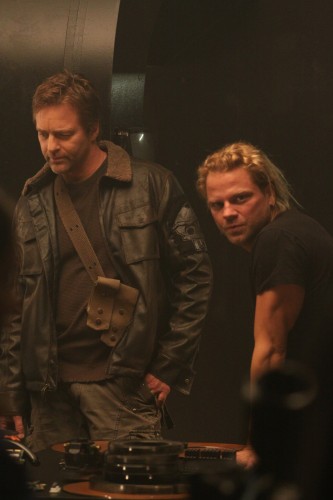 Sean Patrick Flanery is a good actor when he wants to be, his face is well known to genre fans worldwide & he’s something of a fixture on the festival circuit as well. Why he thought making this film this was a good career move will remain as much of a mystery to me as my inability to pick up hot chicks is (Although I’m starting to think that might be remedied once I change my deodorant). As Captain Jekel, leader of the pirate ship, he uses a voice seemingly inspired on Christian Bale’s Dark Knight growl. The only difference being that you could at least hear the dialog when Bale started growling, Flanery differentiates his growl from Bale’s by whispering it (Is a whispered growl even possible)? All he succeeds in doing is making his (Horrifically rote) dialog inaudible & indecipherable. Their really isn’t anything else to say about the other actors except that Jeremy London seems to be having some fun & actor Russell Richardson looks amazingly similar to Idris Elba (Pacific Rim, Prometheus). 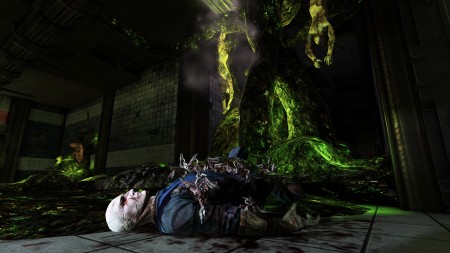 As to the script, I understand that Zariwny didn’t have much money to make this movie but if that’s the case…why not set your sights a mite lower before you attempt to make an action film set in outer space? Don’t get me wrong but maybe a romantic comedy or a good ole’ slasher flick would’ve made a better choice considering what he had to work with. The CGI on display would be inexcusable on a Playstation one game. The set design takes a page from the Roger Corman book of set design, namely using everyday items like egg crates & TV monitors and making them look cool except that the entire film takes place on 3 or 4 sets and all of them are filled with cheap keyboards painted grey & monitors displaying what looks like mid 80’s Vectrex video game graphics (Look Vectrex up on Wikipedia if you don’t know what I’m talking about). The sound mix is a big mess as well with voices mixed so poorly that I had to turn the volume on my TV up to the max to hear what was being said (and even then I couldn’t make out what Flanery was saying). And the volume was so loud that the plethora of explosions nearly blew out the windows in my mausoleum…go figure.

I hate to knock a film that people worked hard on. I get no pleasure out of calling a turd a turd (Well…maybe sometimes), but movies like Scavengers leave me little to no choice. It’s a film in which literally nothing happens & when something does take place, it’s incredibly underwhelming & painful to look at. I consider it my forsworn duty to warn those who look at the cover art and think they might have a winner to save their hard earned $1.50 (Or whatever rentals cost nowadays). Take the money and buy a quart of milk or a couple of apples, something good for your body for Pete’s sake! All renting Scavengers will do for you is bring you a few inches closer to total insanity. And that, dear acolytes, is what they pay The Black Saint to do.

Wait a minute…I am getting paid for this ain’t I?

Scavengers – Zero out of five shrouds. 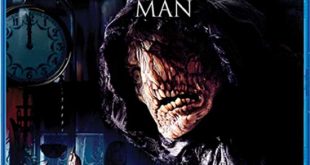