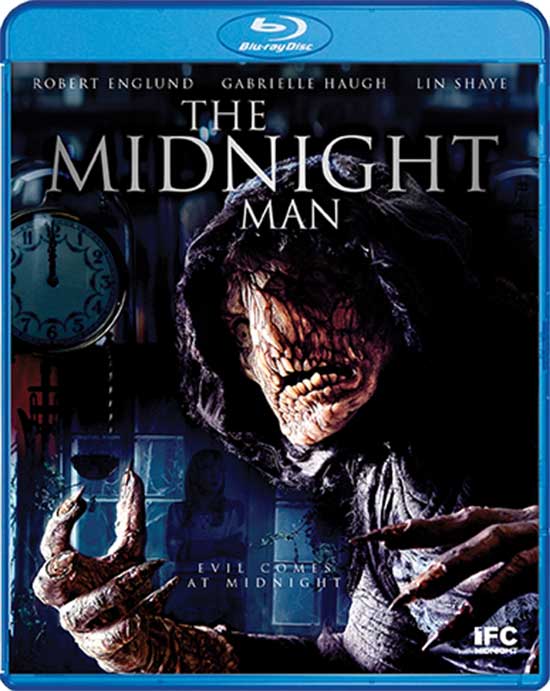 Two complete idiots decide to play a game (even though there are about 10,000 warning signs all around them that are telling them that they shouldn’t mess with it) and immediately regret it as it causes the Midnight Man (an evil spirit that sounds just like Dr. Claw from the old Inspector Gadget cartoon) to show up and mildly annoy anyone he encounters. Will they be able to find a way to defeat him and survive the night (or more importantly, will you be able to finish this movie before falling asleep or just shutting it off about 20 minutes into it)?

Let’s just cut to the chase right off the bat, shall we? The Midnight Man is horrible. Period. It is honestly one of the worst movies I have ever seen in my life and I really do think that I lost a couple of IQ points after watching it (not that I had that many to begin with). It is a sort of a mix of Jumanji and IT, but I would much rather watch either one of those films over and over again than sit through The Midnight Man ever again. I thought that this film was a complete mess that was boring, poorly written, poorly acted, and was as about as entertaining and interesting as watching paint dry. It is a total mystery to me as to how movies like this get greenlighted as there is literally nothing good about it. I thought that it was a complete waste of time and while I try not to go overboard when it comes to bashing movies I feel that it is my duty this time to stop anyone else from having to experience this film. Why is it so bad, you ask? Read on… 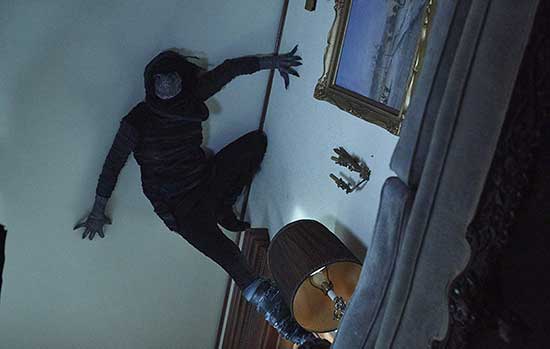 The plot is as about as unoriginal as they come. We have a young woman named Alex that is hanging out with her sickly grandmother (played by Lin Shaye, who must have really, really needed a paycheck) who appears to be quite out of her mind due to the fact she is the only surviving member of a group of friends who played the Midnight Man game back in the day. Alex’s pal Miles (played by Grayson Gabriel, whose acting and hair are the scariest things about the film) shows up and they decide to go snoop around the attic where they find the instructions on how to play the Midnight Man game (which are bound by a rope and locked away in a box). Ignoring the obvious signs that they should just leave well enough alone (neither one of them are the smartest people in the world) they play the game and the Midnight Man shows up to terrorize them (and by terrorize them I mean he talks a lot and doesn’t really do anything else). Eventually one of their other friends shows up and decides to play the game too because-hey, why not-and she too gets targeted by the title character (her big “greatest fear” scene reminds me of the scene from Bill and Ted’s Bogus Journey when they are in Hell and little Ted is terrorized by the Easter Bunny). Needless to say, the plot of the movie is pretty cookie cutter and if you’ve seen The Bye-Bye Man, Ouija, or several the many other similarly-themed films that have popped up in recent years then you have already seen The Midnight Man. 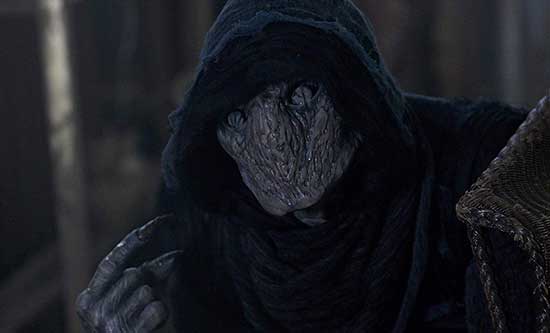 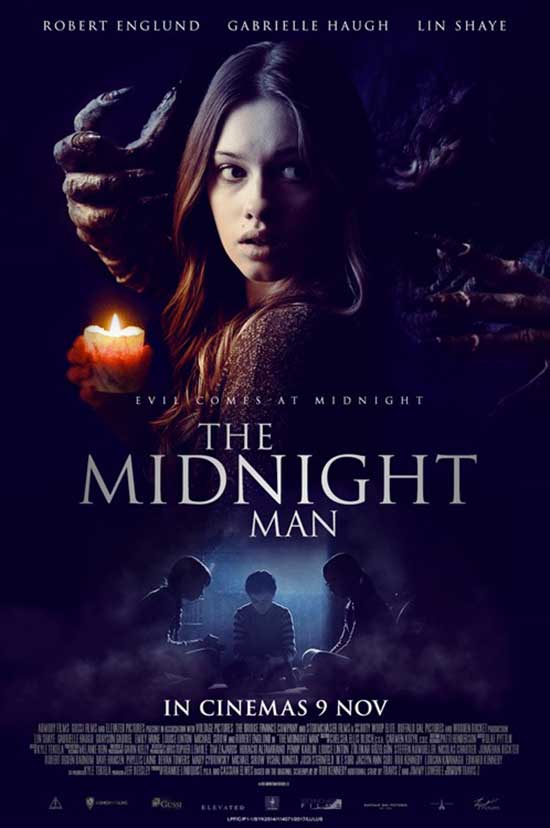 I think that the biggest problem that I had with the film though was the fact that it is just mind-numbingly boring. If you enjoy watching movies that feature a couple of people stumbling around through the dark for most of its running time then you’re in for a treat, but if you’re like me and want a little something more then you are going to be mighty disappointed. After a somewhat OK opening scene it takes the title character no less than 45 minutes to actually make an appearance and until then we just get scene after scene after scene of Alex and Miles talking about uninteresting things, Shaye’s character ranting and raving and carrying on like she has rabies, and Miles talking to himself. 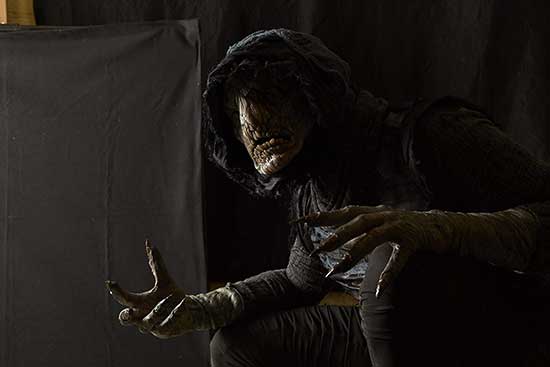 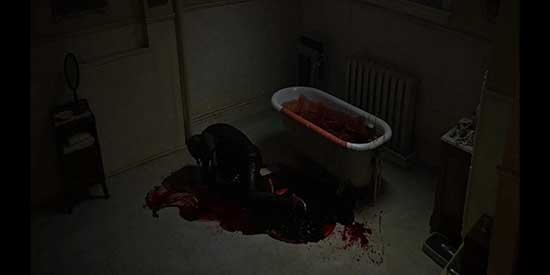 Robert Englund (who also really must have needed a paycheck) pops up at one point but to be honest his character is so pointless he really isn’t even worth mentioning. Even after the Midnight Man does show up he doesn’t really do anything other than talk like Dr. Claw (and boy, does he like to talk. This guy is so chatty he should have his own talk show) and that’s pretty much it. Somehow, I managed to get through the entire film without drifting off or skipping ahead to the next scene, something I doubt many viewers will be able to accomplish if they decide to watch it. 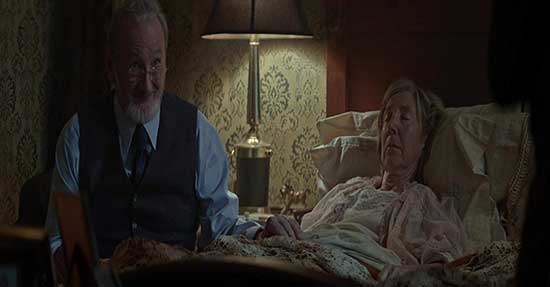 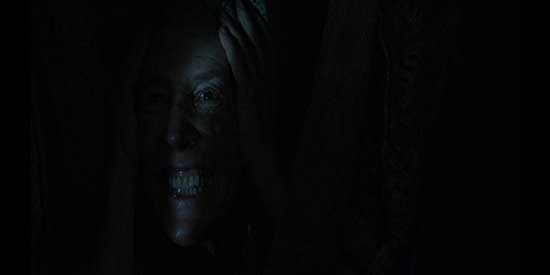 Without a doubt The Midnight Man was a true stinker. It has absolutely nothing going for it and is just as bad-if not worse-as 2015’s crap fest The Gallows in a lot of ways. I would honestly be ashamed if I was involved with this film in any way and if I were I think that I would make sure to have my name taken off of it. Believe me folks, it is that bad. It is so bad, in fact, that not even watching it with a group of friends and making wiseass MST3K-like comments about it make it enjoyable (I did so, and I think that the two friends that I watched it with hate me now because I forced them to experience this movie). In short, avoid The Midnight Man at all costs unless you are a glutton for punishment.

The Midnight Man is now available on bluray per Shout Factory