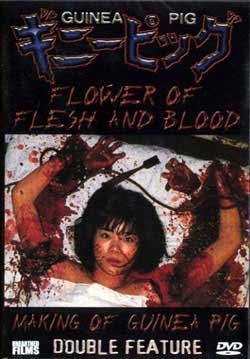 The second video, Za ginipiggu 2: Chiniku no hana (1985) is said to be based on a snuff film sent to the director Hideshi Hino by a crazed fan. In it, a man dressed as a samurai drugs a woman and proceeds to cut her apart, and finally adds her body parts to an extensive collection. The snuff film rumour has been shown to be a contemporary legend; the film was in fact based on a manga about a florist who kills women and uses their dismembered parts as the seed of his beautiful flower arrangements. Most of this element of the story is cut out for the making of Guinea Pig due to the low budget and need of shock value. In fact, the actor playing the killer is the creator of the 1970s manga from which the story is derived.

Gross, disgusting, perverted stomach churning, and as close to a real snuff film as you’ll get….it must be a Guinea Pig film! This one is called Flower of Flesh and Blood.

Now before you read too far, I must instill a disclaimer that this film is only for viewers of cinematic experience….. nothing more. If you really can avoid vieing it, then I advise doing so. To clarify, the film is presented as a re-telling of a supposed video tape that was sent by an obsessed fan that captures and murders women on tape. Thank god its not real, but its certainly feels real! Flower of Flesh and Bloodto break it down starts with a stranger stalking for a victim, chasing down that victim and then bringing her back to his torture chamber. No names, or cast is needed. It is a killer and his on screen torture session. The scene is set in some room in his lair where he keeps his tools and torture devices. The setting…a women tied to a bed. Now what follows is the slow torture and dismemberment of this young lady till complete dislocation of all her parts. To allow for a slower procedure he heavily drugs the victim to the point of complete numbness and displacement. 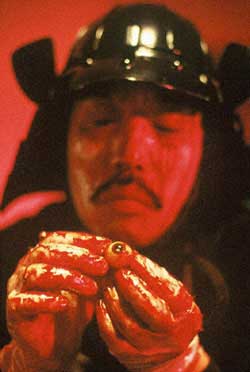 As far as reviews go, there really isn’t much here accept the description of what occurs. The title name of Flower, refers to the killer being a flourist, which to be honest I didnt really get the first time around. We are always in the presence of the 2 actors, but of course we assume a third person who is doing the camera work. Though I think the point was to engage the viewer more as voyeuristic eye on the process so we never really connect with any camera person on screen.

Our killer is oddly white-faced pale man, wearing lipstick and some sort of ancient samurai hat. His teeth are half missing and decayed combined with his black moley face. Just that image alone is scary. He does address the camera is some weird poetic ways speaking of blooming flowers and other nonsense. I kind of got the feeling like when you watch a chef describing his course preparation. 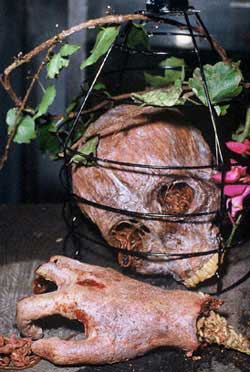 The film itself is a breakdown of dismemberment steps till the victim’s final death. After drugging the female, he carefully disremembers each hand, proceeding with her legs, feet and a final beheading. It’s done methodically so the film lasts its full length of viewing. In the hand dislocation scenes they actually have to be pryed off like spiders clinging to a branch. I found that a little too eerie for comfort in addition to the chaotic bloodshed. The brilliance of this film (if you can call it that) is the FX that comes across as the real deal. Though we know from the camera cutaways and edits, that these are “just” props, the realism of the body parts and the tissues are enough to make anyone feel its power and disgust. Camera close-ups are provided so that you see every sinew, bone fragment and vein being severed in a slow primitive barbaric fashion. 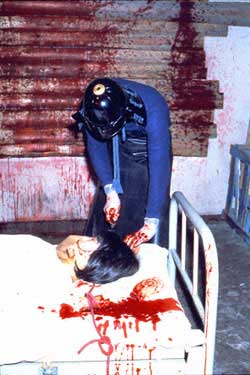 Real cuts like this would have blood spurting out profusely, which it doesn’t. Also to adding to its visceral nature, he doesn’t perform clean razor samurai cuts, but more of a sloppy dull knifed tearing methods. 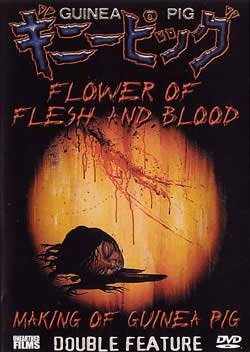 Where does this end? Well of course the women is chopped up till her final beheading which pretty calls the day. But wait there’s more! He feels the need to carve out her eyes and lick them as well (yes. lick them). The final scene which to me was even more disgusting was the tour of his body parts collection. Complete with corpses, maggoty heads and aquariums full of real worms and parts was downright beyond comprehension. The props were believable enough to have to look away several times. 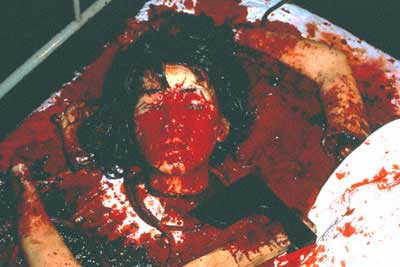 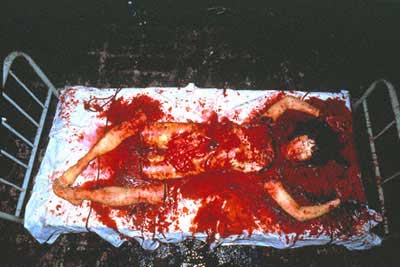 In the end it really isn’t a keeper of any sort, but it provides a good tale to tell others that these films do exist. You really don’t want to borrow this to someone you know as they always come back thinking your the sick one for owning it. I’m sure you’ve been in that situation before. What is important above all the madness and unsettling garbage is that someone felt the need to create these films and share them. If this was the real deal, I would call it a snapshot of hell itself.