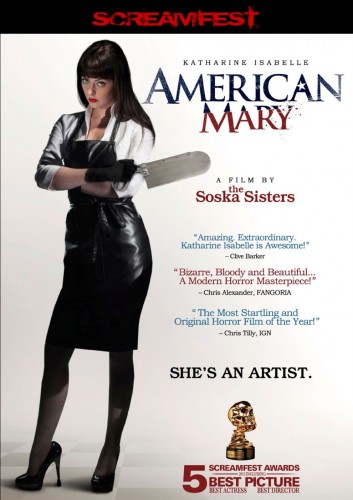 XLrator Media will be releasing AMERICAN MARY on DVD and BLU-RAY on June 18, 2013. The film is written and directed by Jen and Sylvia Soska aka “The Twisted Twins” and stars Katharine Isabelle.

Eli Roth and Clive Barker are huge fans of the twins and the horror community has deemed them the “Next Big Thing in Horror.” AMERICAN MARY is a body-modification horror, revenge thriller and psycho drama, distinguished by a riveting performance by Katharine Isabelle

“Twisted Twins” Jen and Sylvia Soska are back with their stunning follow-up to the indie hit Dead Hooker in a Trunk. AMERICAN MARY is the story of a medical student named Mary who is growing increasingly broke and disenchanted with medical school and the established doctors she once idolized.

The allure of easy money sends a desperate Mary through the messy world of underground surgeries which leaves more marks on her than the so-called freakish clientele. Appearances are everything.