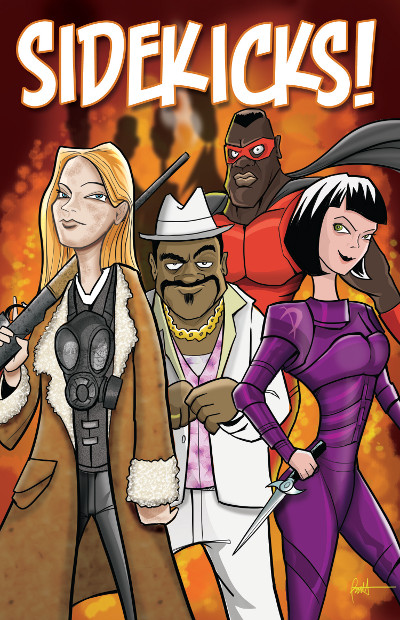 “I’m no Hero,” she repeated. “Real Heroes die young. Their too honest, too good. I can’t help playing dirty. That’s why I’m just a sidekick.” She shrugged. “At least I get to live.”

When someone decides to write about a sidekick, they’re deciding to write a different kind of story. It isn’t going to be about glory but it might be about honor. It won’t be about power, or at least not about the display of it. It won’t be grand or clean-cut, it’ll likely be petty and messy. Murky. And there isn’t nearly as high a chance of getting the girl, or the guy. Of course, that is why these stories, in both the telling and the reading, appeal to a different set of people. Pinko socialist that I am, I just happen to be one of those people.

Sidekicks! is an anthology about the second string, the background players and the partnerships behind the heroism and villainy and minor and major plots both to gain and thwart control. Despite what the cover art may seem to imply, the tales don’t just focus on spandex clad four color warriors. Those are there, but there are also yarns of serial killers, Sheriffs, third world regimes, wizards, assassins and more. If you want variety of genre and style, buddy, you got it here.

I can’t go further without mentioning the introduction, by Psuedopod honcho Alastair Stuart. Normally, intros are throwaway background or generic back-patting and, as such, not worth mentioning. But this guy… Lays out a heartfelt, intelligent basis for the whole damn thing with honest wit that manages to pull of a true rarity by being as meaningful as the stories themselves. There’s a reason that the analyses on Psuedopod are as much of a reason to listen as the stories they tell there and this man is it.

Patrick S Tomlinson’s “Coffee and Collaborators” does a great job of setting the tone with its irreverent manner and statement that the heroes and villains are overpowered dolts that would destroy the world and themselves if their sidekicks did not reign them in. Meanwhile, Donald J. Bingle explores the machinations behind political power that will have you looking at whoever is off to the side of the podium rather than the one behind it with the wondrously named “Second Bananna Republic”. It’s impossible to not mention Matt Betts when he appears with a grim tale of what happens when the backup oversteps their bounds and runs the risk of being viewed as the hero in the weird western “The Old West”. And then there’s “Hunter and Bagger”, Alex Bledsoe’s of serial killers and arrogance that plays out like an old Ananzi story.

As good as those stories are, two truly got what I wanted this anthology to be about. “Hero” may not be the most inspiring title, but Kathy Watness uses this tale of a second rate Wizard and his assistant to underline the main value of a sidekick. Someone to keep the hero grounded, to provide a leg up when needed. The one who may not be able to beat the bad guy or scale the mountain, but gives the one who can the extra push needed. All without intruding or controlling their actions (something that pairs it well with M.E Garber’s “Worthy”). Then there is Alexis A Hunter’s “The Balance Between Us”, a tale of war and muddled morality where no path is safe or righteous. In such a situation, the right partner can help prevent the worst decisions when the need for a choice between horrors must be made. It isn’t about ego or pride or even being right but simply about making it out the other end hoping to be able to live with yourselves. Damn brilliant, both of those stories.

Yes, there are a few tales that fall a bit flat, mostly due to a lack of true narrative to give them a sense of wholeness, but there aren’t any that I didn’t at least partially enjoy. My biggest problem is the overwhelming amount of “The Sidekick is the Real Hero” stories where in the hero is an egotistical, bumbling fool who only succeeds because of a sidekick that does everything for them (much like Without a Clue did for Sherlock Holmes and Watson). While I get the desire to turn the trope of the weak, ineffectual sidekick on its head, simply saying that the sidekick is really the one who is great and the hero is kinda stupid and always getting into trouble only switches paradigms. This kind of half-way deconstruction doesn’t change anything unless a new paradigm is established and kinda bugs me.

Despite that rant, and largely due to some damn fine yarn spinning, I enjoyed myself reading this. I recommend ignoring the bland title and somewhat single minded cover art (pretty though it may be) and give this a whirl. I can pretty well bet you’ll find something you like. 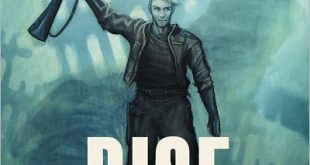