Following a successful preliminary run with fans, Full Moon Features is thrilled to officially announce their new video streaming service at www.GrindhouseFlix.com, host to the weirdest, craziest, and most unbelievable grindhouse films from the 60’s, 70’s, 80’s – and brand new world premieres – all from the convenience of a computer or mobile device via the Grindhouse App.

The first film to make its world premiere on the service is OogaBooga, a tongue-in-cheek grindhouse exploitation flick in the vein of Django Unchained, starring two-timeGolden Globe winning actress Karen Black (House of 1000 Corpses), Golden Globe winning actor Stacy Keach (American History X), Siri, the curvaceous P*rnstar, and Internet sensation Maddox, creator of the self-proclaimed theBestPageInTheUniverse.com in his memorable film debut. Ooga Booga is directed by the prolific Charles Band, founder ofFull Moon Features, and follows the murder of an innocent African-American medical student whose soul is transferred into the body of an obscure toy, eventually extracting his revenge by killing racists in the city.

“We wanted to create an unparalleled movie site for impossible to find cult classics,” explained Band. “This service will finally make it possible to discover the obscure films that played in decadent art house cinemas years ago, and be first to access our exciting world premieres, such as our newest feature film Ooga Booga. ”

For only $4.99 per month, fans can stream rare and bizarre film gems instantly on any device (including iPhone, iPad, Android, tablets, and desktops) with four new films being added to the library each month. Titles include new world premieres, such as Ooga Booga on March 12, and obscure favorites such as Necroplis, Savage Island, White Slave, Riot in a Women’s Prison and many others.

Those who purchase single movies will have access to a permanent digital copy of the film. Renting isalso an option, for $1.99 per title. 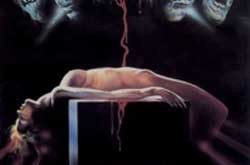