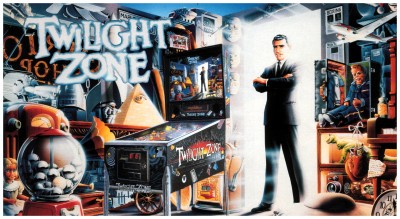 “You unlock this door with the key of imagination. Beyond it is another dimension: a dimension of sound; a dimension of sight; a dimension of mind. You’re moving into a land of both shadow and substance, of things and ideas. You’ve just crossed over into…The Twilight Zone.” Few television shows have bequeathed a more treasured legacy of ideas and style, and it still stands as the role model for the anthology genre. Its trenchant parables on humanity draw the viewer in by gently tugging at the sleeve of the imagination and, through science fiction, fantasy and horror, explore human hopes and despairs, prides and prejudices, strengths and weaknesses, in ways conventional drama never can. The Twilight Zone was created by Rod Serling, a butcher’s son from Binghampton, New York whose writing talent had flourished in the early days of television drama, winning three Emmy awards. A relentless and prolific writer, Serling himself wrote the majority of the show’s 156 scripts. Said to have suffered insomnia, he kept a tape recorder at his bedside to dictate ideas that came to him as he tried to sleep. 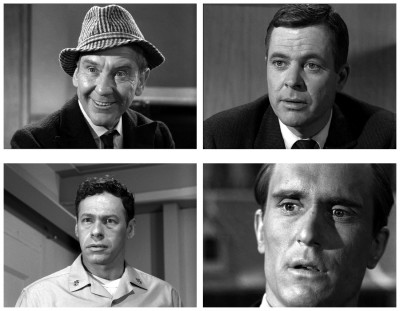 The series’ other major contributors were Richard Matheson and Charles Beaumont, and each had his own distinctive style. Where Serling’s tales tended to be more whimsical and sentimental, Beaumont’s were dark and disturbing, while Matheson wrung every nuance of suspense out of his carefully structured stories. But all the episodes were topped and tailed by Serling’s memorable, measured narration. The series was also notable for featuring both established stars (like Buster Keaton, Burgess Meredith, Mickey Rooney, James Whitmore and Ed Wynn) and actors who would later become famous (like Charles Bronson, Robert Duvall, Peter Falk, Mariette Hartley, Dennis Hopper, Ron Howard, Jack Klugman, Lee Marvin, Elizabeth Montgomery, Billy Mumy, Leonard Nimoy, Robert Redford, Burt Reynolds, Telly Savalas and William ‘The Shat’ Shatner). Serling did write a teleplay entitled The Time Element intended to be the pilot episode, concerning a man (William Bendix) complaining to a psychiatrist about a recurring dream in which he imagines waking up in Honolulu just prior to the Japanese attack on Pearl Harbour, which takes a major psychological toll. Although it ended up being broadcast on Westinghouse Desilu Playhouse, it’s considered by many to be the pilot episode and has even been adapted as one of The Twilight Zone radio shows. 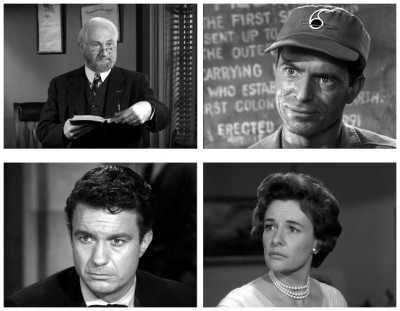 The Twilight Zone premiered in 1959 but, despite rave reviews from enthusiastic critics, the show struggled to find an audience, and its future was put in jeopardy when the third episode (Mr. Denton On Doomsday) was one of the lowest-rating episodes ever. Luckily numbers improved during the second month, surpassing its competition on the rival networks and convinced its sponsors to stay on until the end of the season. Many of the first season episodes are among the best-remembered, including Time Enough At Last, The Monsters Are Due On Maple Street, Walking Distance and The After Hours. Serling did voiceover narrations, and only ever appeared to announce the next episode, with one rather amusing exception. A World Of His Own, about a writer whose words could alter reality, was the final episode of the first season and, due to poor ratings, was expected not to be renewed for a second season. So, as a joke, Serling appears at the end to say, “We hope you enjoyed tonight’s romantic story on The Twilight Zone. At the same time, we want you to realise that it was, of course, purely fictional. In real life, such ridiculous nonsense could never happen.” He is interrupted by the story’s protagonist who says, “You shouldn’t say such things as nonsense and ridiculous,” as he sets fire to a tape with Serling’s name on it. “Well, that’s the way it goes,” replies Serling as he fades away. We then hear Serling’s voice during the epilogue stating that the protagonist lived happily ever after and apparently in complete control of The Twilight Zone. 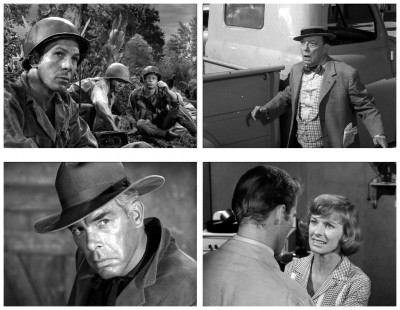 The second season premiered with King Nine Will Not Return, inspired by a real news story of the discovery of a crashed B-24 bomber in the Libyan desert. Bernard Herrmann‘s original creepy theme music was replaced by Marius Constant‘s jarring new guitar-and-bongo theme to accompany a surreal introduction inspired by Serling’s new introduction, and Serling himself stepped in front of the cameras to present his opening narrations. Season two also saw the production of many of the series’ most acclaimed episodes, including The Eye Of The Beholder and The Invaders. The writing trio of Serling, Matheson and Beaumont began to admit new writers like George Clayton Johnson, and Emmy awards were won by Serling for dramatic writing and George T. Clemens for photography. It also earned the Unity Award for Outstanding Contribution To Better Race Relations, and an Emmy nomination for Outstanding Achievement In Drama. 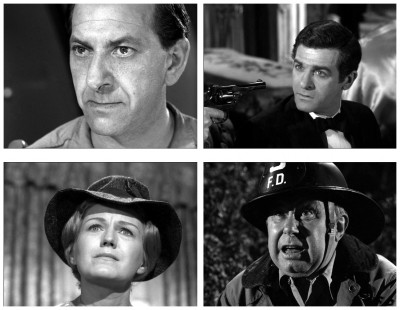 By the third season Serling was feeling exhausted, and rightfully so. In the first two seasons he was responsible for 75% of the writing but, for the third season, that percentage dropped to only 55%. Despite this, he was still able to produce several teleplays widely regarded as classics, including It’s A Good Life, To Serve Man and Five Characters In Search Of An Exit. Scripts by Montgomery Pittman and Earl Hamner Junior (creator of The Waltons) supplemented Matheson and Beaumont’s output, and George Clayton Johnson submitted three more teleplays that examined rather complex themes. Although he seems a natural for a series like The Twilight Zone, the late great Ray Bradbury only ever contributed one script, I Sing The Body Electric, which he eventually adapted into a short story. The third season received two Emmy nominations (photography and design) but won neither. Unfortunately, the series was late finding a sponsor for its fourth season and was therefore replaced on CBS with a new hour-long situation comedy called Fair Exchange. Because they assumed the series had been cancelled, producer Buck Houghton left for a position at Four Star Productions, and Serling accepted a teaching post at Antioch College. Though the series was eventually renewed, Serling’s contributions decreased greatly during the last two seasons. 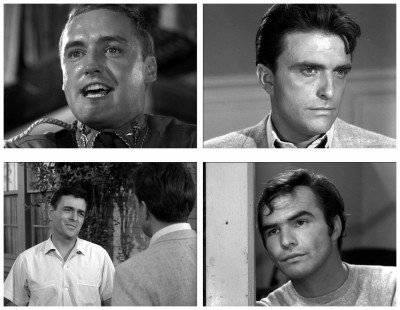 In 1962 CBS contracted the renewed Twilight Zone (now without the ‘The’) as a mid-season replacement for Fair Exchange, the very show that had replaced it. In order to fill the timeslot each episode had to be expanded to an hour, an idea that did not sit well with Serling, who knew they’d have to flesh-out their stories like a soap opera. Herbert Hirschman, who replaced producer Buck Houghton, was assigned the job of redesigning the opening credits and finding quality scripts to produce. Twilight Zone once again turned to the reliable trio of Serling, Matheson and Beaumont, however Serling’s input was limited even more for season four – he still provided the bulk of the teleplays but was no longer able to be a ‘hands-on’ producer, and his narrations were quickly shot back-to-back against a grey background to be inserted later. Due to medical reasons, Beaumont’s input also diminished, so additional scripts were commissioned from Earl Hamner Junior and Reginald Rose to fill in the gaps. With five episodes remaining, Hirschman was poached to work on a new series titled Espionage and was replaced by Bert Granet. Granet’s first assignment was On Thursday We Leave For Home, which is widely considered the season’s best episode. Nominated for several awards but winning none, the hour-long format was deemed a failure and the show returned to its half-hour format for its fifth and final season. 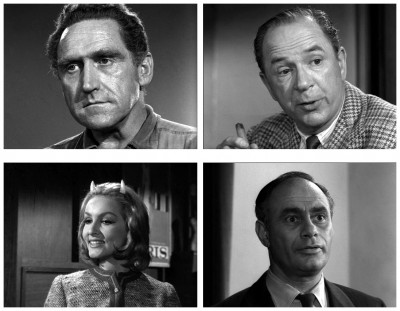 Serling later claimed, “I was writing so much I felt I had begun to lose my perspective on what was good and what was bad.” By the end of the final season, he had delivered at least ninety-two scripts within five years. Sadly, Beaumont was now out of the picture entirely, contributing scripts only through ghostwriters Jerry Sohl and John Tomerlin and, after producing only thirteen episodes, Bert Granet left the show and was replaced by William Froug, whom Serling had worked with on Playhiouse 90. Froug made a number of unpopular decisions – firstly by shelving several scripts purchased under Granet’s term (including Matheson’s The Doll, which was eventually filmed as an award-winning episode of Amazing Stories). Secondly, Froug alienated George Clayton Johnson when he hired Richard deRoy to completely rewrite Johnson’s script Tick Of Time and giving it the new title Ninety Years Without Slumbering. Needless to say, Tick Of Time became Johnson’s final submission to The Twilight Zone. Despite such problems, there were several memorable episodes produced, including Nightmare At 20,000 Feet, A Kind Of Stopwatch and Living Doll. Although this season was not recognised by the Emmys, one episode did receive an Oscar: An Occurrence At Owl Creek Bridge was actually a French short film which was purchased and modified to be included in the final season of Twilight Zone. 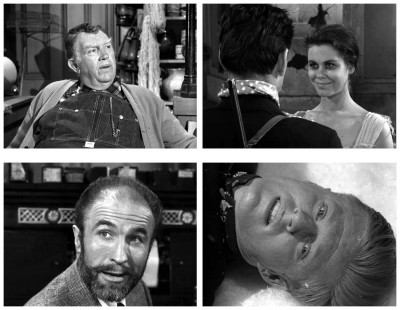 James Aubrey, then head of CBS, announced the show’s cancellation in 1964. He claimed that it cost way too much for a half-hour show and ratings were poor. The ABC network were interested in reviving the series with the new title Witches, Warlocks And Werewolves, but Serling was unimpressed. “The network executives seem to prefer weekly ghouls, and we have what appears to be a considerable difference in opinion. I don’t mind my show being supernatural, but I don’t want to be booked into a graveyard every week.” Shortly thereafter Serling sold his share of Twilight Zone to CBS, leaving the show and the supernatural behind him until Night Gallery debuted in 1969. But that’s another story for another time. Right now I’d like to profusely thank Marc Scott Zicree, author of the definitive tome The Twilight Zone Companion, one of the first (and still one of the best) television episode guide books ever to be published. If you have any interest in the early formative days of American television, Mr. Zicree’s volume should definitely be at the top of your list. But enough of my sycophantic jibber-jabber, it’s time for me to respectfully request your presence next week when your leg will be crudely humped by another bargain-basement barker for…Horror News! Toodles! 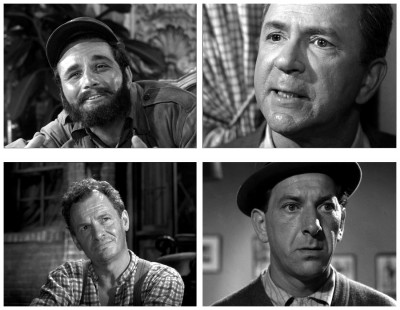