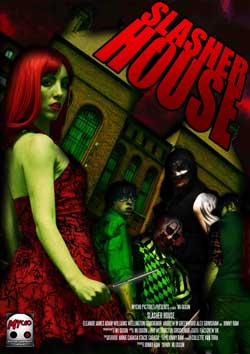 When RED awakens in a prison cell within an old abandoned Madhouse, she has no idea how she got there and why she has been placed there. As her cell door opens she soon discovers that she is not alone. Trapped with the worlds most notorious serial killers she finds herself caught in a deadly game with no escape as one by one the other ‘inmates’ are released to stalk her as their own prey. RED must now battle impossible enemies as she tries to find her freedom and soon realizes that there is a bigger plan for all this than she first realized. Will this ‘Final’ girl have what it takes? Or will she see the last of her days in the endless corridors of SLASHER HOUSE!

“Slasher House” begins with an arresting image. We see a woman, naked, bathed in green light, unconscious in a prison cell. Her painted hair is the same color of her painted lips, a comic book red hue. She awakens, understandably startled by her surroundings. She obeys a series of notes she finds all over the seemingly deserted prison. They lead her to a party dress she puts on, a beer she drinks, a stabbing weapon, and finally, a fellow prisoner who is as equally baffled by his current circumstance.

What is this place? we wonder, along with the girl. Is this purgatory, an alternate graphic novel reality in which the red headed girl is our heroine?

Unfortunately, the wonderment and early promise contained in the first image is woefully short lived.

The first lad our leading lady comes across is a reserved nebbish type with glasses whom she exchanges some awkwardly dialogued, poorly paced scenes with. The other prisoners she comes across are much more memorable…or at least more memorable in the grand scheme of the agonizing boredom that the first part of the film is mired in.

A koo koo bananas psycho clown, a low voiced dude who I think is supposed to be swarthy but just looks grubby with a waist length ponytail and baseball cap pulled over his eyes, and some howling individual who mostly sits in the shadows, rounds out the motley prison crew.

Supposedly, all these individuals are linked some way, some how. What the link is, and whether or not the audience can muster up enough interest to actually give a shit about this over recycled plot remains to be seen.

Not helping matters is the annoying, droning, repetitive soundtrack and the persistent usage of green camera gels that soak everything in a nauseating puce color.

For a film titled “Slasher House” one would expect wall to wall gruesomeness. There are moments of gore, but, they are sparse considering it carries such a hard core title.

Our bright haired heroine never lives up to the kick ass promise of her appearance, instead pouting and scowling throughout the movie, seeming only slightly annoyed and confused by her predicament. And, hey, if the protagonist isn’t engaged in what is happening to her, its a stretch to ask us to become engaged as well.

The aim of “Slasher House”, that is, what the film is trying to achieve, story wise, aesthetically, anything, is very difficult to decipher since the movie remains very uneven. The scenes with the clown, which directly rips off motifs from both “It” and “The Shining” (I guess this director is a bit of a Stephen King fan) are slasher film gory, but there are moments when it feels as if the film is trying to be a psychological thriller with shallow psychology and few thrills. It vers off into supernatural territory every once in awhile for no other reason it seems then to add to the convolution. Sometimes mixing genre, styles and motifs works in film…when it’s done on purpose. With “Slasher House” , it feels more as if the director just went down certain creative avenues, found out half way that they wouldn’t work, so they were abandoned for another avenue that was ultimately abandoned as well. What is left is an ill designed labrynith that the viewer gets stuck inside and desperately wants out of. 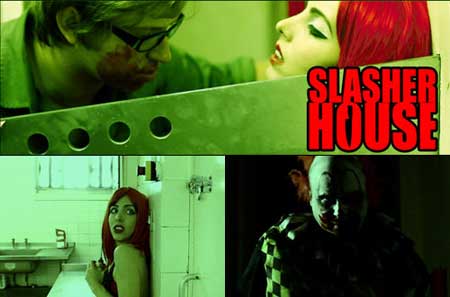 However, whatever the film wants to be, it never manages to be anything more than a tedious exercise in film making that wanders around aimlessly like the lead actress, and is interrupted sometimes by moments of odd, inexplicable scenes of sheer bafflement.

Some houses need work- a little renovation here, a touch of redecoration there, its a bit of an effort, but salvageable. Some houses are beyond repair, built on a foundation that is feeble or too faulty to sustain the structure above it…such is “Slasher House”. Sadly, it was built anyways- do yourself a favour and avoid getting into it. 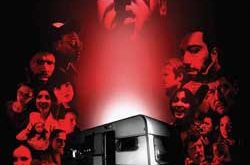 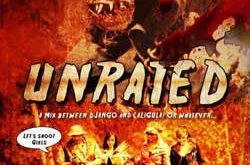