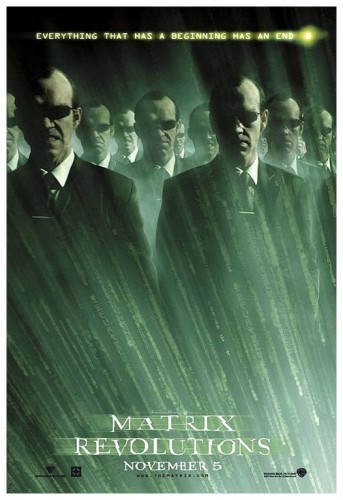 “The machine army continues to drill towards Zion. Within hours, they will overrun the population of the Zionites and lay extinction to human kind. Meanwhile, Neo is held captive by the Merovingian at the train station. Trinity and Morpheus set out on a journey to release him from a mysterious train operator. Also, Smith resumes his quest to kill ‘Mr. Anderson’ as he reveals his identity into the real world and resumes to replicate his program inside the system of the matrix, causing it to decay. All hope is placed in the freed Neo, who must travel to the city of the machines in the Logos ship with Trinity and bargain to save each kingdom from destruction by finishing Smith once and for all. But even with his new powers over the sentinels, will he be able to fight them off?” (courtesy IMDB)

“Everything that has a beginning has an end,” or so said the profuse publicity for the third and final installment of one of the biggest movie events of this new century, The Matrix (1999) trilogy. While the cast and crew eased out a collective sigh of relief, the movie-going public was waiting with bated breath to see the outcome of the cliffhanger of The Matrix Reloaded (2003) released six months earlier. Would it live up to the lofty expectations of the rabid fans? Would it make up for the shonky bits in the previous film? Would it expand the backstory as the superb Animatrix anthology DVD did? And, perhaps most importantly, would it leave us with a satisfying finale? The one-two-punch release of the sequels blitzed cinemas that year, accompanied by a blaze of media hype. Released only six months apart, the sagas received simultaneous worldwide releases in 109 international territories.

The Matrix Revolutions (2003) brought to a close a wild science fiction ride chronicling humanity’s struggle to escape a computer-generated synthesis of reality known as the matrix, and marked the culmination of a four-year endeavour initiated on the heels of the first film. Each film utilises the newly-available virtual technologies in service to its story. Whereas Reloaded had focused on a ‘Burly Brawl’ between Neo (Keanu Reeves) and Agent Smith (Hugo Weaving), and a hell-for-leather chase along a highway, Revolutions centres on an entirely virtual journey into the nexus of the machine world, a climactic ‘Super Burly Brawl’ and an enormous battle sequence that features both virtual and miniature effects. Known as the ‘Zion Siege’, the central Revolutions conflict pits humanity’s refuge against an unrelenting storm of attacks from the machine world.

Picking up where we left off, Neo and Bane (Ian Bliss) lie unconscious in the medical bay of the ship Hammer. Meanwhile, Neo’s avatar is trapped in a virtual underground railway station which acts as a transition zone between the matrix and the machine city. He meets a family of programs who tell Neo the subway is controlled by the Trainman (Bruce Spence), an exiled program loyal to the Merovingian (Lambert Wilson). When Neo tries to board a train with the family, the Trainman refuses and overpowers him. The Oracle (Mary Alice) informs Morpheus (Laurence Fishburne) and Trinity (Carrie-Anne Moss) of Neo’s confinement, and immediately confront the Merovingian (Trinity calls him ‘Merv’) and force him to release Neo. Neo then goes to the Oracle who tells him that everything that has a beginning has an end, and that Agent Smith intends to destroy both the matrix and the real world. After Neo departs, a group of Agent Smiths arrive and assimilate the Oracle, gaining her powers of precognition.

In the real world, Bane is interrogated, and insists on having no memory of the earlier massacre. While the captains plan their defense of Zion, Neo and Trinity take the Logos out and head for the machine city to negotiate a peace settlement. Bane, who has stowed away on the Logos, takes Trinity hostage. Neo realises that Bane has been assimilated by Smith. Bane blinds Neo with a power cable, however, Neo discovers an ability to perceive the world as golden light. Neo kills Bane, and Trinity pilots the Logos to the machine city. Niobe (Jada Pinkett-Smith) and Morpheus head back to Zion in the Hammer to aid the human defenses against the sentinels. In Zion, the fatally wounded Captain Mifune (Nathaniel Lees) instructs the Kid (Clayton Watson) to open the gate for the Hammer. When it arrives, it discharges its EMP, disabling the sentinels but also the remaining defenses. The humans are forced to retreat and wait for the next attack, which they believe will be their last stand.

Meanwhile, Neo and Trinity are attacked by machines, causing them to crash the Logos into the machine city, killing Trinity. Neo meets the ‘Deus Ex Machina’, the leader of the machines, and warns that Smith plans to conquer both the matrix and the real world. Neo offers to stop Smith in exchange for peace with Zion. The machine leader agrees, stops the sentinels, and provides a connection for Neo to enter the matrix. Inside the matrix, Neo finds that Smith has assimilated all its inhabitants. The leader of the Smiths claims to have foreseen his victory. After a protracted battle, Neo baits Smith into assimilating him. The machine leader sends a burst of energy into Neo’s body in the real world, causing all the Smiths in the matrix to be destroyed. The sentinels withdraw from Zion and Neo’s body is carried away by the machines. The matrix reboots, and the Architect (Helmut Bakaitis) encounters the Oracle in a park. They agree that the peace will last as long as it can, promise that all humans will be offered the opportunity to leave the matrix, and they all lived happily ever after.

Complex, densely textured and rather ironic, The Matrix trilogy left warring camps of fans and critics arguing over the meaning and the merits of all three films: man versus machine; robots versus kung fu; style versus substance. The war between man and machine is not really at the centre of The Matrix Revolutions – there’s no mass unplugging of the human batteries witnessed, no collective human breakthrough into the real world. Agent Smith becomes the ultimate villain, multiplying himself to the point where he is a greater threat to the machines and their matrix than he is to the humans. Smith is still obsessed with Neo though, which means it’s in the interest of both humans and machines to put a stop to him. All Smith wants to do is complain about the repulsiveness of humans and sneer at the idiocy of emotions like love.

Inspired by the god-like battles of Japanese anime, their final fight in the sky looks more like a cross between Superman II (1980) and Dark City (1999): lightning flashes; chanting choirs; the One and the Anti-One zoom toward each other and collide in slow motion; crash into things; pick themselves up and do it again. Neo fulfills his messianic function by eventually defeating Smith on behalf of both species and becomes a Christ-like mediator by bringing the world back into balance. The Wachowski brothers remain resolutely silent concerning the pseudo-religious meaning of this third and final installment, preferring to allow each film to speak for itself. History will tell if the trilogy will glean more appreciative scrutiny after the marketing hype and ceremonies have faded into memory. Speaking of which, please don’t forget to join me next week when I have another opportunity to inflict upon you more tortures of the damned from that dark, pitiless bottom…I mean, bottomless pit known as…Horror News! Toodles! 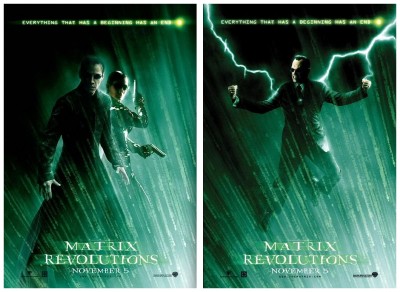 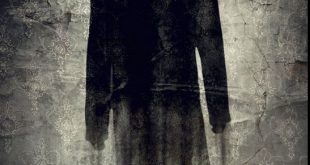 Out of the Shadows