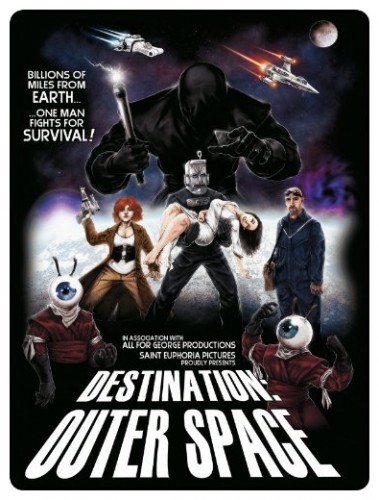 “During a test flight of Earth’s first faster-than-light-speed rocket, an incident occurs that throws test pilot Captain Mike Jackson halfway across the galaxy! Lost in deep space, Captain Jackson must use all his wits and derring-do to find a way back to his beloved home world. A film unlike any other, Destination Outer Space is full of excitement and otherworldly adventure that includes mysterious, alien planets, robotic lifeforms, beautiful space pirates, alien creatures hell-bent on galactic domination and much, much more!” (courtesy IMDB)

There is nothing wrong with your television set. Do not attempt to adjust the picture. I control the transmission. If I wish to make it louder, I’ll bring up the volume, if I wish to make it softer, I’ll tune it to a whisper. I control the horizontal, I control the vertical. I can roll the image or make it flutter. I can change the focus to a soft blur and you wouldn’t notice because this is community television. For the next ninety minutes, sit quietly as you are bombarded with cliche after cliche. Placed in a paper bag, set alight and left on your doorstep for your annoyance this week is the tale of test pilot Mike Jackson (Josh Craig). Thrown half-way across the galaxy during a test flight of the first ever FTL spaceship (I’m not sure but in this case I think FTL stands for Follow The Lemming), Captain Jackson becomes lost in space and is forced to use all of his wits and about 60% of his derring-do to find a way back to his beloved home world of Dirt…I mean, Earth. 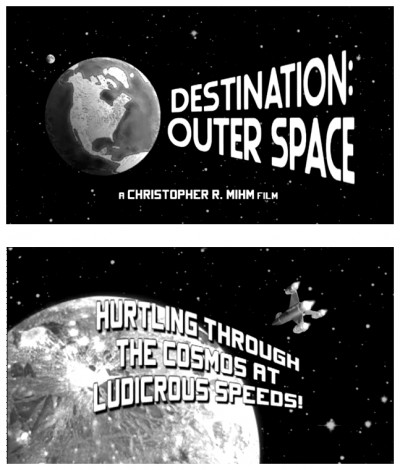 A science fiction movie unlike any other, yet reminiscent of every science fiction ever made, this week’s presentation is chockablock full of excitement and otherworldly adventure involving aliens, robots, pirates, alien robot pirates, and creatures hell-bent on galactic domination! Filmed in retro-tacular black-and-white with a cast of dozens, and featuring special effects that would make my old friend Ed Wood Junior cringe, ladies and gentlemen and things from another world, extinguish all smoking materials, mind the gap, keep your hands and feet within the car, do not flush the toilet while standing in your living room, and get your ticket punched for the thrill-a-minute ride known as Destination Outer Space, directed by the bafflingly prolific Christopher Mihm who, for the last seven years, has produced no fewer than seven neuvo-retro homages to the bad old days of filmmaking, every single one of which I intend to discuss for your undoubted pleasure. 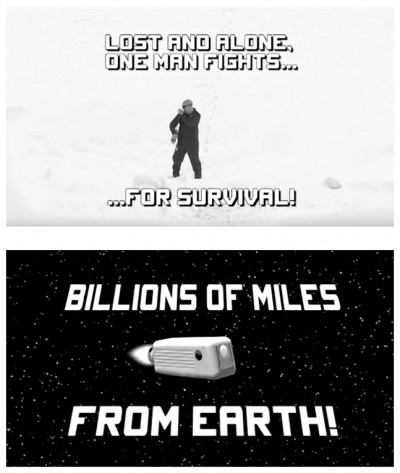 The trouble all started back in 2006 when Mr. Mihm made The Monster From Phantom Lake (2006), which proved to be somewhat of a ‘gateway’ film. Once he had acquired the taste, nothing could stop him. He quickly followed it up with harder stuff like It Came From Another World! (2007) and Cave Women On Mars (2008). Friends and family became concerned and tried to intervene, which Mr. Mihm filmed and released under the title Terror From Beneath The Earth (2009). Then, just when everyone thought it couldn’t get any worse, at the lowest possible point in his celluloid addiction, he forced people at gunpoint to act in his films, resulting in this week’s abomination, Destination Outer Space (2010). Soon after going into rehabilitation, he found God – in a shoebox – and promised he would never touch another video camera ever again. Sadly, six months later he fell off the wagon and secretly made Attack Of The Moon Zombies (2011) while nobody was looking, sneaking off for short periods of time to indulge in editing and other unspeakable depravities. He’s still doing it I hear – early last year he released House Of Ghosts (2012), a loving tribute to the most notorious corruptor of the innocent sixties, my old friend and all-round scallywag William Castle. Some people just can’t be helped. 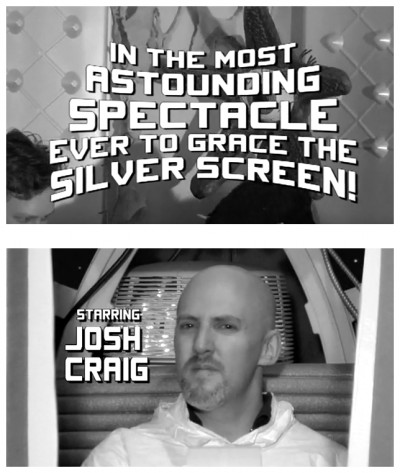 Josh Craig plays the testosteronic test pilot Captain Jackson, a member a large family of human heroes who find themselves lost in space surrounded by weird alien creatures, from John Carter Of Mars (2012) to Flash Gordon (1980) to John Crichton in the excellent Australian-made television series Farscape. The Captain’s fight scenes are well-choreographed, and he does a great job at getting beaten-up – he rarely loses a fight and barely flinches when almost taking a punch. All very dramatic, but it’s hard not to laugh while the Captain has to deal with a space-helmet that looks like a taped-together goldfish bowl, a spaceship that looks like an antique radio, dodgy scenery, a rubber spider on a string and one-eyed aliens with lampshades on their heads – and they say there’s no atmosphere in space! The background music is perfect, as usual. That brassy distorted sound that was so popular in the vintage radio serials suits this sort of film perfectly. This may very well be Mr. Mihm’s least offensive film so far! 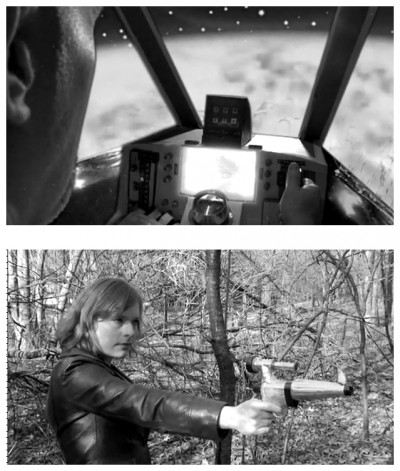 Destination Outer Space is Mr. Mihm’s tribute to space opera, from Buck Rogers (1939) to Buck Rogers (1979), and is about as close to Stanley Kubrick‘s 2001: A Space Odyssey (1968) as he’s ever going to get, which is a nice way to say there’s a lot of spaceship-bound scenes to begin with, but the action really begins to pick up after the first half – I promise. Christopher Mihm has really outdone himself with Destination Outer Space. It’s fun from beginning to end, and the visuals are simply outstanding. I have just two small complaints: There’s way too much exposition, possibly a result of Mr. Mihm’s radio-show origins, and far too many cardboards died in the making of this movie, but it all goes towards making an authentically cheesy film, I guess. 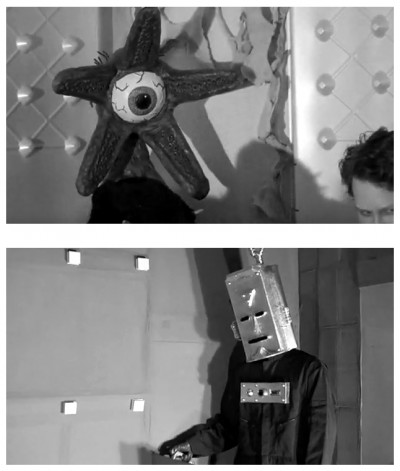 It’s vitally important that you join me for next week’s edition of Horror News, because my horoscope said that unless you read all my reviews from now on, the Earth would be destroyed by a disaster of biblical proportions, you know, real wrath-of-God type stuff: Fire and brimstone coming down from the skies, rivers and seas boiling, forty years of darkness, earthquakes, volcanoes, the dead rising from the grave, human sacrifice – you get the picture. Normally I’m highly skeptical of such claims, but I read it on the internet, so it must be true. So sleep well, enjoy your week and remember, the survival of the entire world depends on you visiting Horror News every week! Toodles! 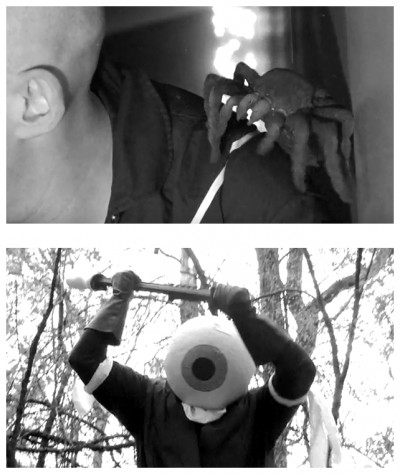