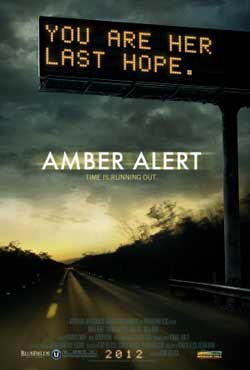 When a group of friends decides to follow a car they’ve seen posted on an Amber Alert, things start to go very wrong.

Seems like anymore, taglines for horror movies need to start with the phrase, “just when you thought you’ve seen the last found footage film.” Yep, they’re everywhere and Amber Alert is no exception. Which of course begs the question, do we really need to have another found footage film? Is there possibly any new direction any of these can take.

Well, in that regards I do have to give kudos to Amber Alert. The premise is a great one: a group of friends spot a car on the highway that matches the description of one that has just been broadcast in an AMBER alert. When they try and help, they end up getting in way over their heads. Now this is a good idea, full of lots of promise. But does the movie fulfill all of its potential. 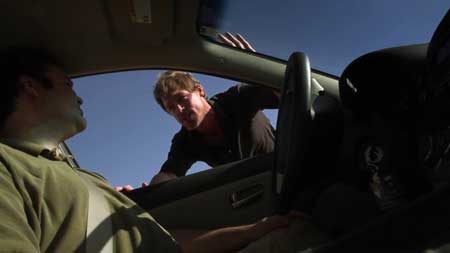 Not all of it to be sure, but I did like certain parts, especially the ones where it didn’t involve arguing, which sad to say seemed to be half of the film, but more on that later. I suppose most of us, when we finish watching a low budget horror movie, often say, “you know, that wasn’t too bad, but it could’ve been so much better if they had only done such and such.” Amber Alert kinda gives you that feeling.

It starts off like every other one: a black screen with an introduction about what we are about to witness. This particular one reads, “On October 4, 2009, in Phoenix, AZ, Nathan Riley and Samantha Green were filming an audition video for a popular TV reality show. The next day – October 5, 2009 – the Phoenix Police Department logged the following raw footage as crime scene evidence.”

Next we see best friends Nathan and Samantha talk about who they are and why they should be picked to be on the reality show. It is a very cute opening and of course is meant for the audience to get in synch with its characters. For me it did. I especially like Nathan, playing the part of the lovable goofball. He seems like a nice guy, one you’d want to hang around with and, most importantly in a horror movie, root for. 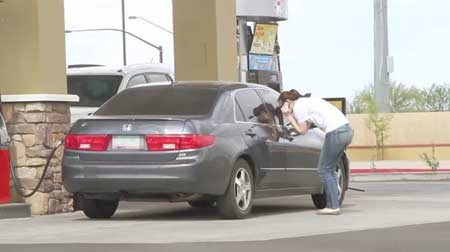 Samantha, too. Well, until they spot the gray Honda on the highway. That’s when the arguing starts. What should they do next? Samantha has no issue with raising her voice to give her opinion in the matter. Nathan tries to remain calm, as does Samantha’s younger brother in the backseat (the one doing all the filming, by the way). But tensions rise, and in all fairness, understandably so. I didn’t mind the bickering as much, per se, just the amount of it. Cut some of that out and the movie is immediately better.

Needless to say the cops aren’t helping that much so it’s up to our band of three to come to the rescue. Honestly, if you can get past the arguing, the high-pitched voices, this is not that bad of a movie. Sure not all of it makes sense, especially the actions of the police department, but if for one second you think that is unusual or unrealistic than I propose you haven’t seen too many horror movies. It’s a standard trope for this kind of film so one should hardly be surprised. 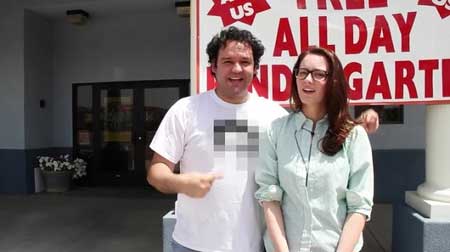 In found footage films you always have to worry about the dreaded shaky camera, but it doesn’t really happen here. The director, Kerry Bellessa, does a good job with the tension, especially towards the end. Of course it helps to have good acting, most notably from Nathan’s character. At times he seems like the only one grounded in some sort of reality. More of a cautious, let someone else figure it out approach. It’s a nice touch and he’s one of the main reasons you’ll enjoy the movie.

Overall, Amber Alert is a good movie but I would only see it if you are a fan of found footage films. And if you can get past some of the arguing, you’ll find a decent film underneath. Could it be better? Sure. If nothing else it was nice to see a found footage film that had a very interesting premise, even if it didn’t quite live up to its full potential.