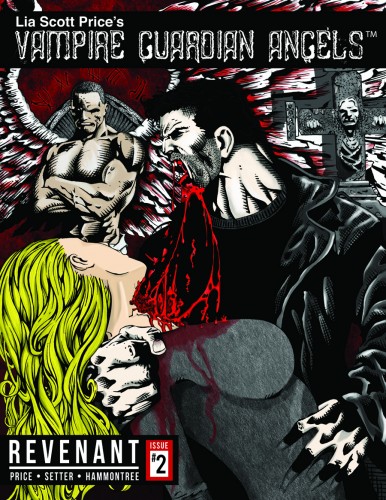 The second issue of Vampire Guardian Angels is out and it couldn’t have gotten bloodier. The second issue starts of with a young man named Janos who is having dreams, visions and hearing prayers. He’s also the prodigy of a Vampire Countess and a rogue Angel named Gregory, who have plans for Janos to do nightmarish things. The second issue is based on the novel Lia had written and self published. The issue itself is again, well drawn by Andrew Setter, the lettering is strong and is readable. The story itself is unique and has treaded upon something we haven’t quite seen before. It asks those questions that sometimes we have to ask but are afraid of the answers. “What if our Guardian Angels become evil and want to kill off humanity? What if they turn into Vampires and want to harvest humanity?”

Those questions are answered in the comic series penned by both, the beautiful and talented Lia Scott Price. The artwork is graphically beautiful as well, it’s a real treat to see the band members of Enthraller to be guests of this series. Each member was drawn well, which is a talent to have, to be able to capture the likeness of an individual and have that person appear within the pages of this very comic book.

The events happening in this series are all leading up to something that will have readers talking about for quite some time. The horror is strong, the suspense is unbearable because we have two major characters who are being put through sheer hell, one who doesn’t have a clue on who he really is and his girlfriend Leah, who is about to have her world turned upside down.

I’ve read the novel and we don’t really get to see a novel adapted into a comic, too often except for Stephen King’s work. The comic series will have everyone talking, especially the second issue. Readers will want more of what is to come, I just hope those readers who haven’t read the novel that this comic book series is based, will have the stomach for what’s in store for them. With the talent Lia has on board for the series, it’s only a matter of time before the real Armageddon can begin.

The novels this comic series is based off of is so rich with a story that can only be described as epic and horrifying. Horrifying because it touches upon a subject that most people would just leave alone, especially those who are firm believers of Guardian Angels. Another thing that is an attention grabber is the cover. There isn’t too much detail on it, only enough to grab the readers’ curiosity. To have them be drawn into this nightmarish world Lia has created for the fans of horror. The second issue has a powerful message to carry out, especially with the main character of this issue. The trials he has to go through, to fight this horrific reality, are challenging, they’re something that I don’t think any mere person can overcome. For Lia to create such a character that is different from other heroes, is a challenge upon itself. When we look at most heroes, we see them coming out on top, but in the world Lia has created, it’s very dark and bleak and we question ourselves will we ever be the same again? That is one question most people are afraid to ask themselves, it can be the same for the characters created in the Vampire Guardian Angels’ universe.

If people want to see the true evil that may threaten our kind, be brave and read Vampire Guardian Angels. I promise you, you will not be praying to your Guardian Angel ever again.