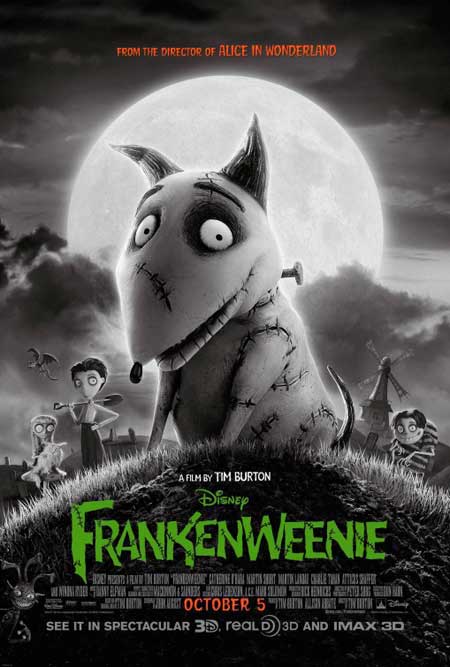 Young Victor Frankenstein conducts a science experiment to bring his beloved dog Sparky back to life, only to face unintended, sometimes monstrous, consequences.

For those of us who dig animated films in the horror genre have been blessed as of late. Last month we were treated to “ParaNorman“, last week we got “Hotel Transylvania” & last Friday we got “Frankenweenie” which is Tim Burton’s second release this year (“Dark Shadows” was released a few short months ago). Expanding on his short film which he directed 28 years ago “Frankenweenie” is the story of Victor Frankenstein, a young boy who lives in the quiet town of New Holland along with his mother & father. He has no siblings but he does have a dog named Sparky and the both of them are best friends. In fact, Sparky is pretty much Victor’s only friend. Victor spends most of his time in his room, working on his experiments and making monster movies that he screens for his parents. As the film opens he’s showing them his latest opus (In 3D no less), which features a small town being attacked by a giant monster which is ultimately defeated by an even bigger creature…Sparky! 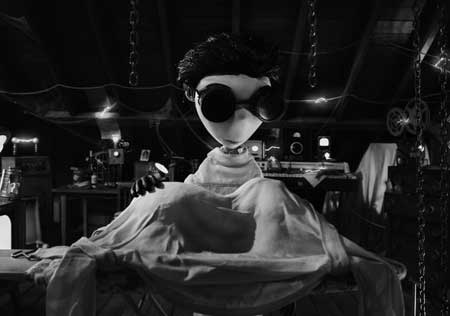 Just as the film ends it melts and Victor utters four words that we hear a lot in the movie “I can fix that”, and he promptly goes upstairs to his room (In the attic) and begins to cut and splice the film to repair it. It’s here where we see the bond that Victor & Sparky share, as Victor is working on repairing the film. Sparky is bouncing about, trying to get Victor to play with him and in a few short seconds the two of them are playing in the backyard. His parents are concerned that Victor has no real friends & no other interests but his work and Sparky and begin to mull over ways to get him out of the house more often. Later that day at school Victor finds he has a new science teacher, who has a striking resemblance to Vincent Price, named Mr. Rzykruski (It’s pronounced Rice Krispie) (Martin Landau). Mr. Rzykruski is…passionateabout science to say the least and during his introduction to the class he announces the upcoming science fair to the kids and that he will be judging it. All of the kids get applications for their parents to sign & later that evening over dinner as Victor gives his to his parents to sign his dad makes him an offer: Try to play some baseball with the other kids and he’ll sign the form. 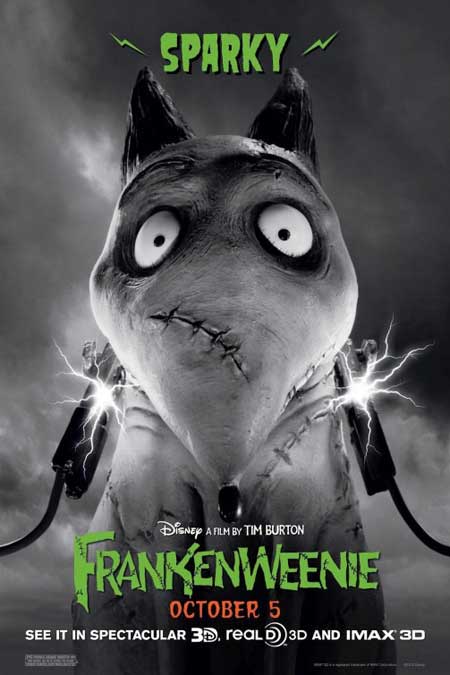 Cut to Victor standing at home plate with a bat in his hands, his mom in the stands cheering him on & his dad coaching the team with Sparky excitedly looking on. On the mound pitching is classmate Toshiaki (James Hiroyuki Liao) who’s first pitch is caught in mid air by Sparky. The next few pitches are strikes but on the next pitch Victor takes a mighty swing and the ball is headed out of the park! As he runs the bases, Sparky runs after the ball which cleared the fence and landed in the street just beyond. He manages to get the ball but as he crosses the street to return it he gets hit by a car and dies. 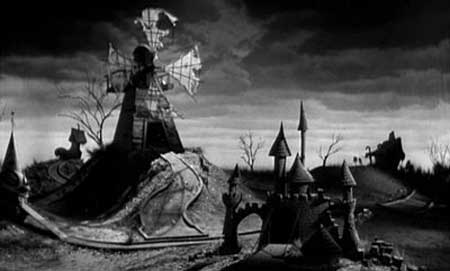 Sparky is buried on top of a hill at the local pet cemetery and Victor is understandably crestfallen. All he does is think of his fallen friend & doodle drawings of him in class, but Rzykruski gives him an idea as he demonstrates the power of electricity on a dead frog by stimulating the nerves on the frog’s legs making them move. Victor devises a setup to use lightning to resurrect Sparky & he digs up Sparky in order to bring him back to life. And although he’s successful how can he keep Sparky a secret from his friends and his parents? And what will the residents of New Holland think if they find out what he’s done?

When you boil it all down “Frankenweenie” is primarily a giant love letter to the Universal horror classics of the 30’s. It has bits and pieces of all of the most popular films from that era strewn about it. “Dracula”, “The Wolfman”, “The Mummy”, “Frankenstein Vs. The Wolf Man”, “Bride Of Frankenstein” & of course, “Frankenstein”. Most of the major characters are designed to look like some of the more popular actors of the era as well. Speaking of the characters, something has to be said about the outstanding character design here. Everything about this film screams homage but it doesn’t try to club it’s audience over the head with it. It treads a very fine line between subtle & over the top very well and those of us in the know will see the tributes quite clearly while everyone else will just appreciate the craftsmanship that’s on display. Oddly enough my favorite character in the film was Weird Girl (She has no name…just “Weird Girl”). Her enormous head and her tiny eyes were actually creepy and her tiny voice helped to sell her oddness. There’s a great scene in which she presents Victor with a piece of cat poop shaped in the letter V which means that something big is going to happen to Victor (She has proof too). Her face reminded me of the hunter with the shrunken head at the end of “Beetlejuice” a little bit (Another homage perhaps?) and as voiced by Catherine O’Hara she’s supremely creepy. Speaking of characters, Burton even manages to find a role here for his favorite actor (Again…you’ll know who I’m talking about when you see it). 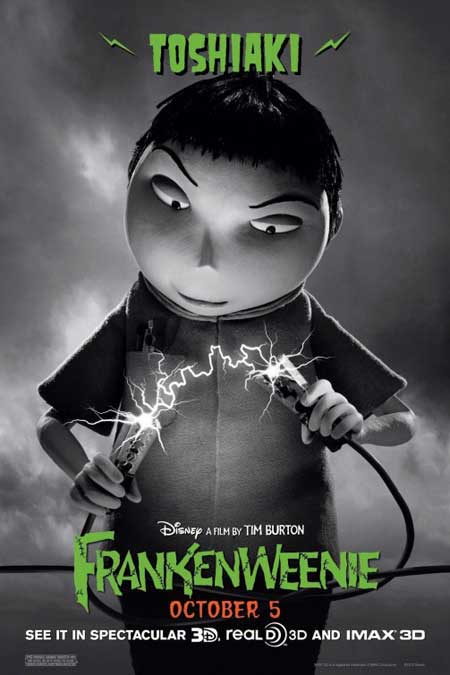 Other characters look & sound like Boris Karloff (Nassor) & Ygor (Edgar Gore), Victor’s neighbor is even named Mr. Burgemeister! And if you hang around to look at the end credits you’ll see that the majority of the main characters voices were voiced by O’Hara & Martin Short who both do a superlative job of paying tribute without mocking the origins of their characters. As Victor, Charlie Tahan gives a touching and emotional performance. He captures both the exuberance & sadness that his character experiences in the film just right. The two homages I didn’t really get were the Kaiju tribute that makes up a big part of the final third of the film and the odd “Gremlins” tribute. Not that I didn’t enjoy them but they felt out of place here amongst all of the classic monster tributes here. I understand that Godzilla is indeed a classic monster of the first order and TOHO studios is indeed worthy of a shout out but not here among the Universal classics and to make things worse it’s not TOHO that was responsible for the beast here, it was DAIEI studios (You’ll know what I mean when you see it). And I don’t care what anyone says, Joe Dante’s film is clearly referenced here and although it’s fun it felt out of place here. 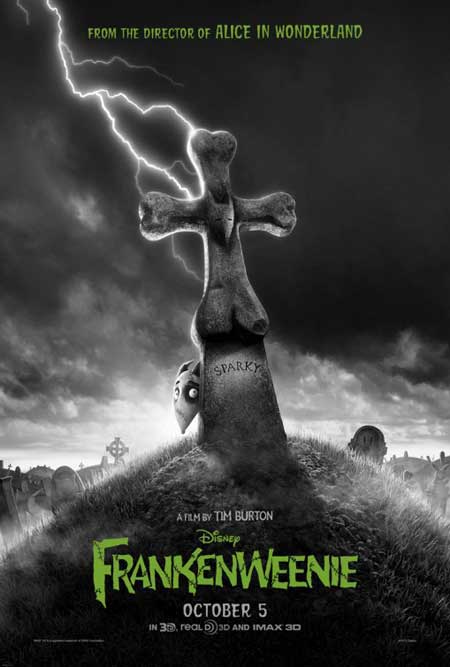 “Frankenweenie” was shot in gorgeous black & white and the lack of color helps to make the shadows that much more ominous & the set design far more evocative than the usual kiddie fare. Speaking of kids…while it’s not really scary “Frankenweenie” does have a couple of “Jump” scares in it and the central idea of a loved pet dying might press a few buttons in younger tykes so parents might want to speak to the little ones beforehand just to let them know what they’re in for, I’m pretty sure a few tear ducts will be open wide among the more sensitive audience members. The 3D is nice enough but it does very little to make the viewing experience any more exciting. I think an opportunity was missed to throw in some cool 3D effects here, the subject matter seems custom made for tossing in some creatures into our laps. 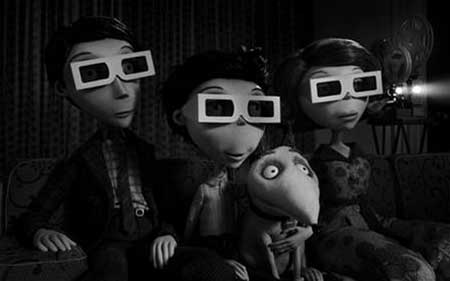 I also think that while the pre-requisite “Happy Ending” that is a hallmark of Disney films ends the film, “Frankenweenie” would have been better served by ending after (What I hoped were) Victor’s final words which while terribly sad, were more fitting considering the subject matter and more realistic as well. But as this film is being aimed at kids I suppose it might have been a bit too much for them to understand and deal with afterwards. It would’ve made for a really nice ending if you ask me though… 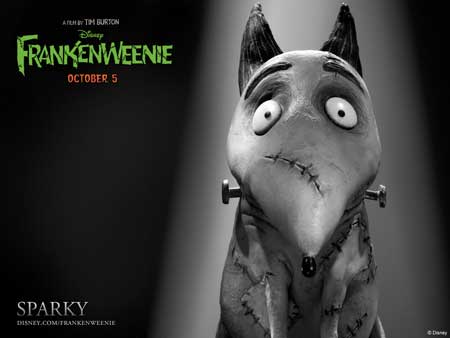 If you’re a lover of the classic monsters then you can’t go wrong with shelling out a few bucks to see “Frankenweenie” (Avoid the 3D unless you’re a completist though). It touches upon all of the hallmarks that made those films so memorable to this day and entertains those that might not be familiar with those classics of the 30’s at the same time. It is a tad more morose than you might expect but it isn’t depressing. It isn’t especially funny either although it has it’s moments. I think that’s just owing more to Burton’s sensibilities more than anything else. I respect that he didn’t compromise any of his vision and delivered a film that fits perfectly in his canon. It’s unmistakably Burton and it’s unmistakenly brilliant as well.