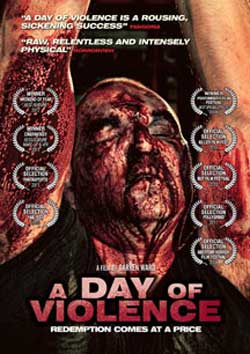 Mitchell Parker lies dead on a morgue slab. In life, ‘Mitchell’ served the low ranks of Debt Collectors, surrounded by all the filth and scum that the world had to offer. He thought his luck was in, when on a routine collection he stumbles across 100,000 in cash, hidden in the sofa of one of his clients. A dark and haunting past hangs over the head of ‘Mitchell Parker’, one that will lead him on a journey of redemption and ultimately sacrifice. Hunted by the gang whose Money he has stolen. He must evade capture and use the money to rid himself of his demons once and for all. Witness his last days of life

With a meaty British swagger and a premise that matches its title (with a vengeance), comes a gritty gangster horror show called “A Day of Violence“. It’s not “too” hard to tell from the gnarly poster art pieces that someone or other gets their ass beat pretty hard. Welcome to the world of gangsters, thugs, and killers. We’ve seen these style films take on a more elegant approach when your referring to movies like “Good Fellas” or “Casino”. “A Day of Violence” keeps it raw. 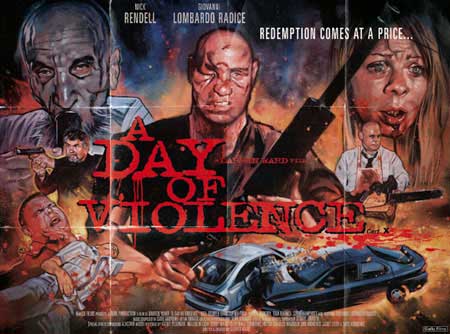 A Day of Violence, first, comes from the UK side of things directed by Darren Ward. Saying it’s gritty, might be an understatement as while plenty get shot, tortured, and beaten…. this trend of violence stays with the film from front to back (and pretty graphically).

A Day of Violence centers its base around the seedy debt collectors of this small town. But more specifically one of the strong-arms named Mitchell Parker (Nick Rendell). Mitchell, a rather large fella is a thug for hire who shakes down those his employers send him after. When he arrives at a client named Hopper’s apartment, he discovers an additional $100K hidden with the $2K he came to collect. 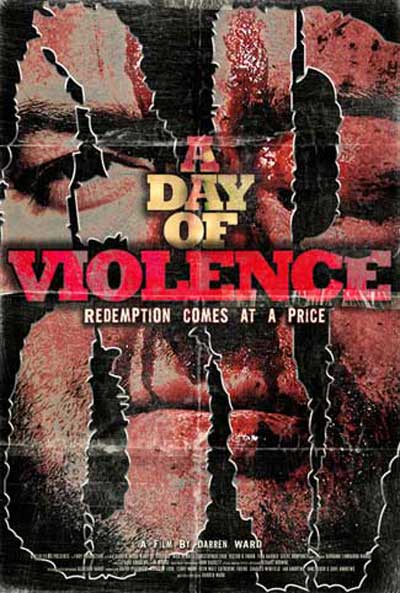 Mitchell, an opportunist, makes the big mistake of not only slitting Hopper’s neck from ear to ear but also claiming the cash for himself. You would imagine this kind of thing is pretty common among thieves and killers, though Mitchell has no idea about the circle of darkness he just brought upon himself.

Quitting his current employer to work for the competitor Curtis Boswell (Victor D. Thorn) seemed like a good idea since Mitchell can just say that the cash was missing. When the competitor, his mew employer turns out to be the money lender to Hopper, things becomes a bit risky and complicated.

First Mitchell has to watch his long time friend, Smithy (Steve Humphries), not only hung upside down and beaten but castrated in the process (due to Smithy siphoning some of the take off the top), but also has to stand by while Boswell’s thugs execute him in cold blood. 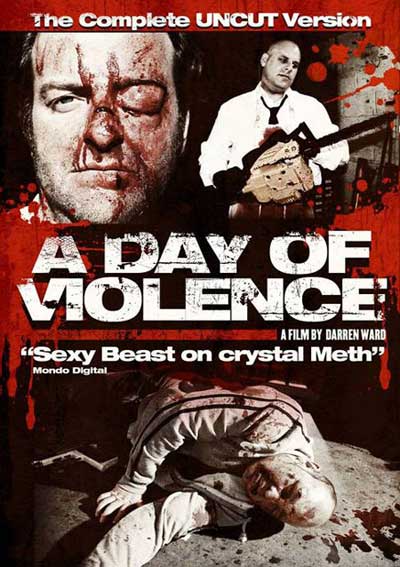 There is no denying that this is nasty stuff that even makes “Scar face” look tame. The castration scene is pretty hardcore warranting the dark humor of tossing Smithy’s junk around after the fact. The cast throws names around like “Noodles”, and “Chisel” like something out of a Dick Tracy movie, but for each of these thugs, we get the sense that they are pretty accustomed to this hard core way of life. In fact, it’s a good reason “not” to ever borrow money from anyone (let alone debt collectors).

Mitchell feeling distraught over his friends death, offers to help Smithy’s girlfriend Suzy (Helena Martin) when Boswell’s thugs are called to shake her down as well. Knowing that a circle of violence is centered on the recovering of the loot that Mitchell possesses gets to be complicated for him as he is sent out to shake others down who are suspected of harboring the loot.

A Day of Violence” is highly recommended for those who like gangster thug violence served up hard and cold. The film while brutal at times also manages to invoke a small sense of heartwarming background surrounding Mitchell’s wife and daughter who have to ordeal his occupation and a past history of the daughter’s accident. We begin with Mitchell laying as a “recently deceased slab”, though it’s the back story of this movie that fills in the experience.

I really enjoyed Darren Ward’s take on violence and his knack for keeping things moving. In most of the case of these UK gangster films, they all appear to take their realism toward violence serious without the need for celebrity heroics. It’s a different experience than what we create in the US, but its also a very welcome breath of cinema. There is much in the way of hierarchy, backstabbing, underground activities and cold stone beatings to experience here that I believe is really worth a look.