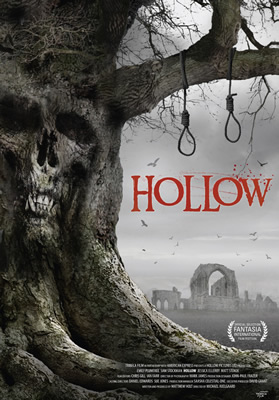 When four friends journey to the remote English countryside, they discover the local legends haunting the region. Set just outside the nearby ruins of an ancient monastery, stands a gigantic, elderly tree that mysteriously draws young lovers to commit suicide, to be found hanging from its twisted limbs. The closer they get to uncovering the mysteries of the Hollow, the more they run the danger of losing their sanity and their lives.

In the years since The Blair Witch Project introduced found footage into cinematic lexicon, cinema verite has become an equally panned and praised method of story telling. Perhaps no film has captured the tonal spirit and intensity of that ground breaking film as Hollow by director Michael Axelgaard and writer/producer Matthew Holt. Hollow is genuinely creepy, tense and frightening. Focusing on the four main characters, their thoughts, actions and motivations, the film draws the audience into their personal drama, how this drama both effects and is effected by the local legends and myths they uncover. Combined with the excellent acting from the film’s cast, this focus allows the stakes to escalate mounting to sheer madness. 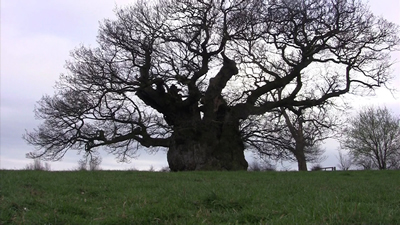 Director Michael Axlgaard and writer Matthew Holt start the film off with a bold choice, they point blank reveal the end of the film. The film begins with a police forensic video recording at the base of the ancient tree revealing the location of the victims, where the camera was found and the fact that the car drove in but never drove out. By the time the conclusion unfolds, these initial hints only serve to ground the fears and terror that consume the four main characters along the way. This is all made possible due to the care and attention they provide the characters. Hollow is more their story than the legend surrounding the old ruins and the ancient tree. Their fear is as frightening as the horrors they encounter. 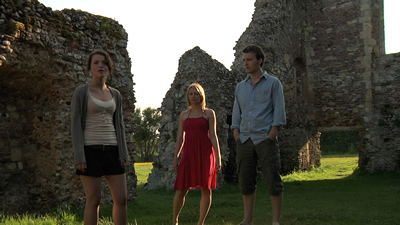 Emily Plumtree leads the cast as Emma. All the other characters’ motivations and actions center around her. She also represents the final girl for the film. Hollow depends on her performance far more than the others even though they all share roughly the same amount of screen time. She delivers the complexity of the character, her suspicions, her denials and, most importantly, her fears. It’s her knowledge of the countryside, her familiarity with the myths, and her uncompromisable fear of the tree and the ruins that create the uneasy atmosphere that lead all the characters to hysterics. Emily Plumtree delivers as Emma, she is innocent, flawed, and frightened of both the tree and her own life. 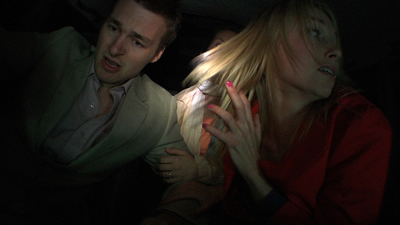 Matt Stokoe as Scott and Sam Stockman as James are best friends that share affection for Emma, except Scott is engaged while James can only pine away, heartbroken and jealous. It is their actions that drive Emma to madness, a madness that leads the entire group to their fates. Each character is delightfully flawed. Jessica Ellerby makes the most of her role which is essentially the fifth wheel in a group of four. Her conflict and arguments with Emma are highlights in the film both confrontational and humorous. 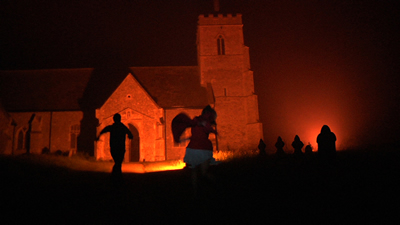 One of the many challenges of pulling off a found footage horror film is explaining why the characters continue filming when things begin going south. Another is why the characters are filming in the first place. Hollow handles these contrivances of the genre deftly and naturally. While primarily filming the group’s trip to record Scott and Emma’s engagement, James is also filming to expose Scott’s true nature and reveal his own affections for Emma. Later, when filming is last thing on any of their minds, the camera is their only source of light and that source is only available when filming. This works to the film’s advantage adding to the authenticity and to the visual chaos of the shots. 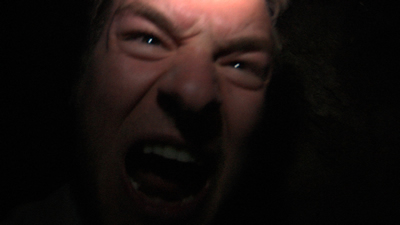 Hollow uses found footage to its fullest in many of its more chilling sequences, often delivering the scariest of scenes without showing anything but shadows, mere glimpses of something moving and characters cowering in fear. It also relies on sound to heighten the fear. In other shots, the angle is purposely positioned to present the experience as if the audience shares the character’s point of view more than just recording the events. The audience becomes a fifth friend shaking in there shoes along the two couples. This too helps to elevate the tension. 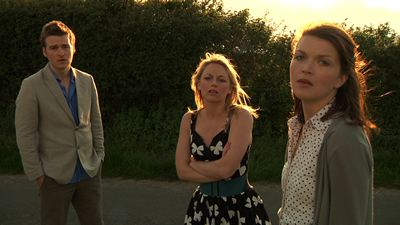 Hollow is a chilling example of found footage with the minimalist approach it offers. It has a small cast, few settings and relies on the camera and audio tracks to convey the horror. For those who dive into the carefully orchestrated characters, their personalities and their drama, Hollow will deliver scares and screams. For those who are looking for more visceral horror elements,  this film may end being more of a bore. The cast is authentic and the fear they experience is genuine. The single flaw Hollow has that will keep it from reaching the popularity level of Blair Witch Project is the lack of anything tangible, almost all the fear is psychological; but, this is on purpose, the choice of the film makers. Another similarity it has with Blair Witch is that is has a terrifying and satisfying conclusion. At its best, Hollow will have you jumping at every shadow, your heart pounding, your hands shielding your eyes.