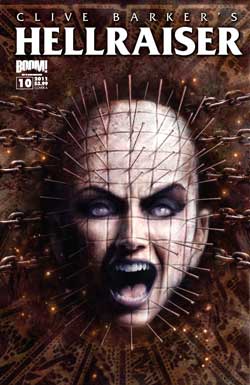 With Kirstie now leading the reigns of Hell, she has quite a few new agendas on her plate. In this issue Kirstie shows her former friend Tiff a place called “The Pit” where eons of lost corrupted souls go upon being sentenced to an eternity in Hell.

Meanwhile Captain Spencer has lost all memory of his former role in Hell under the past moniker of Pinhead. His recent therapy sessions don’t seem to be helping him remember much either. It appears that his memories of his former position in Hell are locked deep within his subconscious.

Kirstie seems to be taking quite well to her new job with the aid of her Cenobium demon friends. A calling occurs which proves to be fatal for the caller. However Kirstie has something that Spencer needs…..his memory….. of which has been tucked away in a peculiar orb. Spencer gets his wish