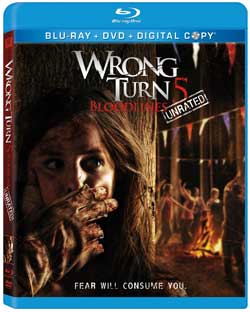 A small West Virginia town is hosting the legendary Mountain Man Festival on Halloween, where throngs of costumed party goers gather for a wild night of music and mischief. But an inbred family of hillbilly cannibals kill the fun when they trick and treat themselves to a group of of visiting college students.

I’m not entirely sure how the watchable but unremarkable WRONG TURN has managed to spawn four sequels but then again it’s small fry compared to the prolific FRIDAY THE 13TH and HALLOWEEN franchises. Like those series, and A NIGHTMARE ON ELM STREET, the set up can be summarised as ‘youngsters terrorised by unstoppable killer’ and it’s a depressing thought that such a brief sentence can describe almost 30 ostensibly different films. 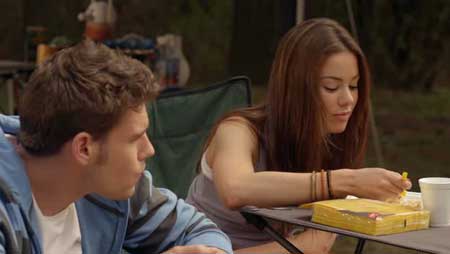 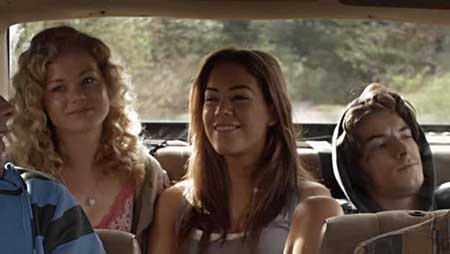 I suppose it’s something that WRONG TURN at least has unusual (and multiple) villains whereas Jason Voorhees and Michael Myers were / are to all intents and purposes interchangeable. But it’s an inescapable truth that all these films only show true originality when staging elaborate scenes of violence. All of which brings me to Declan O’Brien’s Wrong Turn 5: Bloodlines (2012), a film that exists solely for the purposes of depicting torture and murder in as many bizarre and sadistic ways that its makers can dream up.

Fairlake, West Virginia is host to the annual Mountain Man Festival which sees hordes of youngsters – and, apparently, one TV crew – descend on the town for a few days of sex, drugs and rock n roll. Among those arriving are five college friends: druggie Billy (Simon Ginty) and his girlfriend Cruz (Amy Lennox), tough guy Gus (Paul Luebke) and his girlfriend Lita (Roxanne McKee) and floppy-haired guitar-playing singleton Julian (Oliver Hoare). However, before they even reach Fairlake they narrowly avoid running down a man in the road, total their car, get into a knife fight and are arrested by the passing sheriff. And all this within the first fifteen minutes (and I haven’t even mentioned the sex scene and the murder). 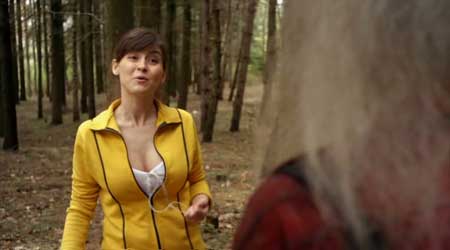 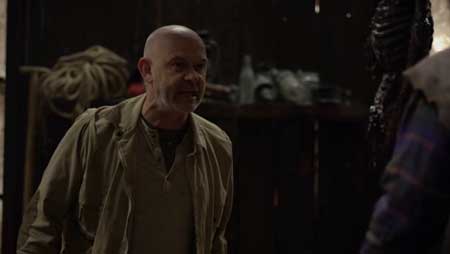 With practically the entire cast now in jail, director O’Brien has to resort to ludicrous means to get his film going again. Selfless Billy – who has enough “party favours” on him to make Keith Moon think twice – tells Sheriff Angela (Camilla Arfwedson) that the drugs are all his, that his friends know nothing about it and that she should let the others go. Which, unbelievably, she does – thereby demolishing my preconceived notions about tough US policing. However, her more pressing problem is the old man she arrested with the kids: running his profile through her computer she learns he is Maynard Odets (everyone’s favourite Cenobite, Doug Bradley), a wanted fugitive. Having arranged for the US Marshals to pick him up the following morning all she has to do is make it through the night in one piece. But, as Odets informs her with relish, his three boys – grotesquely deformed inbred hillbilly cannibals – will be on their way into town to spring him from jail and slaughter everyone into the bargain. 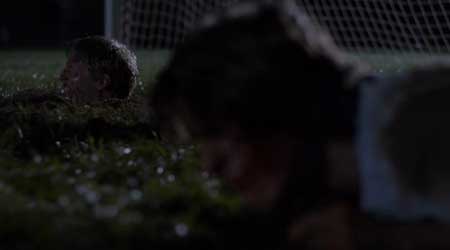 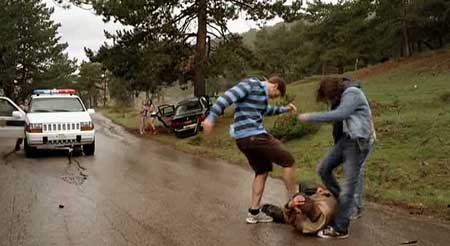 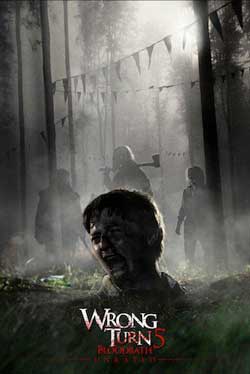 What follows is some of the most gleefully sadistic, gloating brutal and almost nihilistically bleak horror that I have witnessed for some time. In fact “horror” is not what this is, for O’Brien’s purpose here is not to frighten or scare you; what he wants to do is revolt and disgust you to the point where you will feel like taking a shower after it’s all over. The methods by which he kills off his cast are absurd in their complexity and utterly illogical in plot terms but my word they are brutal. 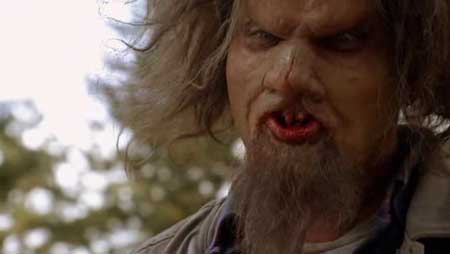 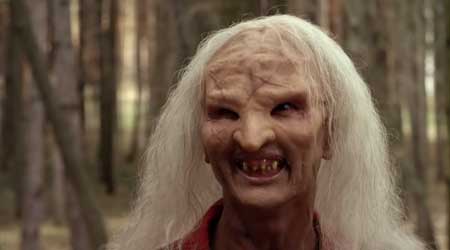 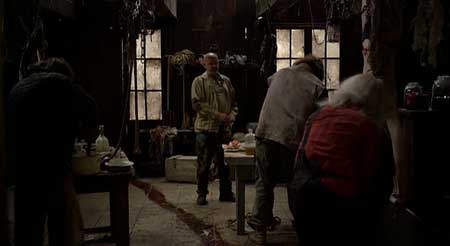 Some may argue that their very absurdity leavens the effect of the violence but all I can say is that it didn’t work that way for me. I’ve seen some pretty extreme cinema in my time but I’ve rarely seen anything quite so relentlessly and determinedly sadistic. Moreover, Wrong Turn 5: Bloodlines (2012) denies any chance of mercy, salvation, justice, vengeance or even hope; there is no cavalry to ride to the rescue, much less a happy ending to send you home somewhat comforted. All this film has to offer is suffering and death. Call me old fashioned but I need more from my horror films than that.

Wrong Turn 5 is now on blueray per  2oth Century Fox