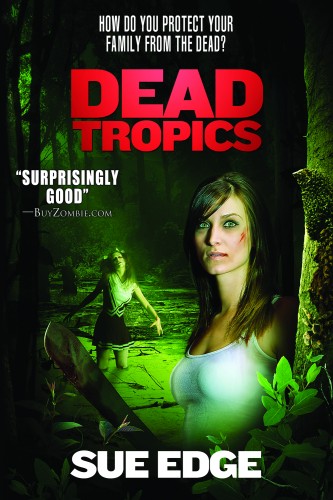 Finding originality in the zombie fiction genre is becoming quite a difficult task, but Permuted Press continue to find authors who are able to take a very hackneyed concept (the dead returning to life to feast on/massacre/infect the living) and create some very compelling stories.One such story is DEAD TROPICS by Sue Edge, which takes a look at the usual survival tropes through the eyes of a mother rather than your average badass/mercenary/chancer/Bruce Campbell knock-off.

Told with first-person narrative, the novel has a taste of urban fantasy about it thanks to the fluid and conversational nature of Edge’s prose. The central character of Lori, a nurse who must come to terms with a terrifying zombie apocalypse and protect her family, is fleshed-out nicely, and her motivations always ring true.

Reading the account of Lori saving children from a hospital ward is both exciting and moving, as are many of the set pieces throughout the book. Set in Australia, the book also offers a different setting to a lot of zombie fiction, which adds a further different flavour to proceedings and further sets DEAD TROPICS apart from the pack.

By the time you reach the end of the story (which is sadly not as long as it could be, to be honest), the reader finds themselves rooting for Lori a great deal, making the heartbreaking scenes that pepper the book all the more effective. Lori’s determination to protect her children and family from marauding flesh eaters rings true, thanks to some very impressive examples of how a parent would indeed react in just such a situation.

Yes, there’s gore and action and thrills galore, but the story’s real strength lies in how Lori and those around her deal with the horrific changes the world is facing. .DEAD TROPICS isn’t going to bring that many new readers to the realms of zombie fiction, but it will certainly give existing fans something which is very refreshing indeed.