A professor opens a crypt and reanimates rotten zombies. The zombies attack a jet-set-group which is celebrating a party in a villa nearby…

“Burial Ground: The Nights of Terror” is one film I had seen per way of various posters and lobby card art pieces (but had not taken the time to sit down yet for review). I can tell you after giving this odd gorefest-of-a-film a try, that it really is an essential “must see” (for all the wrong reasons). Burial Ground (also called “The Nights of Terror” is an Italian film directed by Andrea Bianchi. It takes on the approach of other nasty films from this era such as “Zombie” and “City of the Living dead” by incorporating shock, gore, and a bit of its own brand of extreme content. Some might call this a Fulci rip-off, but I felt it fell into a class of it’s own demented origin. “Burial Ground” is by most standards a quirky, slow moving, and bizarre creation of a film. In other words…..forget your horror sensibilities, the rules have changed. 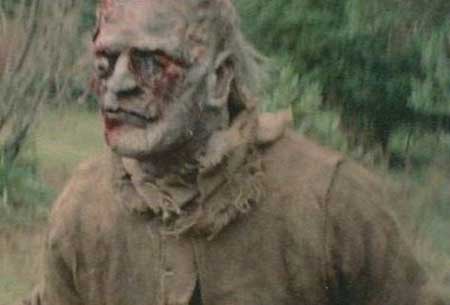 The attraction for me comes in the number of well done zombies incorporated in this movie that easily take on a look of their own. The zombies are very slow moving to the point of “meandering”, with each having its own corpse-looking identifiable features,. Many of the zombies incorporate the use of live worms and maggots dripping off their faces, while others are better classified as decomposing shells. The stand out zombie for me is the initial the buck-toothed goon (who I assumed was “sort of” the leader of this pack). 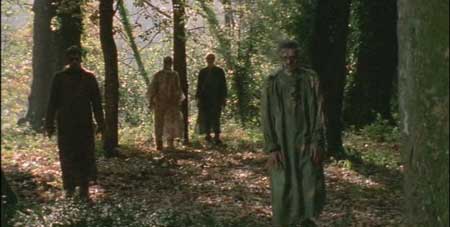 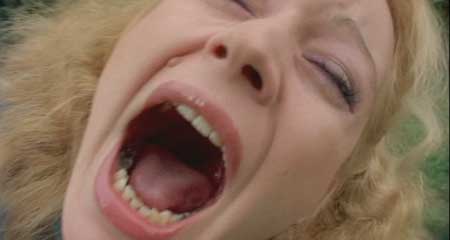 The premise is laid out pretty basic with the sole intention being to arrive at gruesome kills. Maybe a bit “too” basic (and too hole-filled) for modern day horror viewers. The zombie attacks are a bit silly as you’ll find that since they are “so” slow moving that any of the main characters could easily out run them and find safety (this aspect is not new, but it does instill a bit of common sense humor here). however it all begins when Professor Ayres discovers a secret stone that revives the living dead. They emerge from the local Monk order while 3 couples are on-route to a private visit at his mansion. The couples spend a few nights in this swanky location never actually meeting the professor who invited them in the first place. They also seemed to be pretty sexed up as each seduces the other while we wait for more violent action (it makes for good TV!). 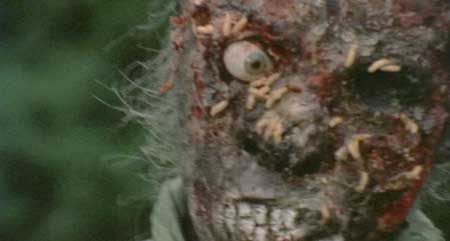 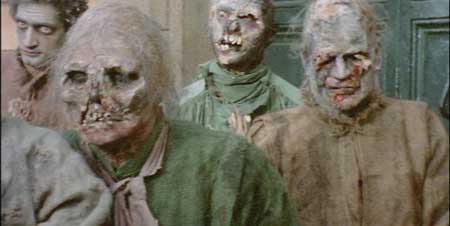 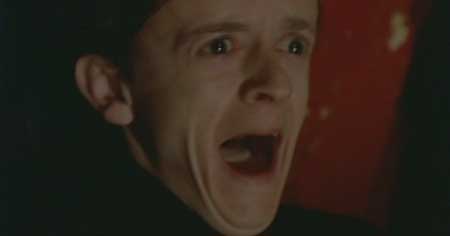 Shortly after, these walking corpses begin to terrorize the visitors usually by overpowering them in numbers and eating their flesh (but not necessarily in that order). As a viewer you might feel cheated in some respect as we’re never really given any kind of story of substance. Mainly it become a setup for these “Monk-robed cretins to attacks the visitors in the most ridiculously meandering ways (in fact you might even say frustrating as to the way victims are frozen in their tracks and overcome). The premise becomes a mute issue as we are taken more with the high level of violence exploited in full Italian blood red glory. Yep, this film moves from a silly looking zombie film into a flesh eating high gore production. Each of the kills usually ends in close-ups of the zombies tearing their flesh off, eating it, and sharing with the others…cool eh? But wait their is more! 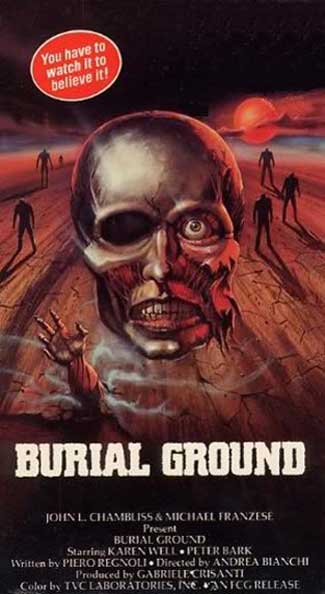 Yep, the most disturbing aspect comes in the form of Michael , the son of one of the visiting couples (sorry …name alludes me). Actor Peter Bark plays the role of a 10 year old (who is obviously more in his 30’s). Putting aside the fact this kid is odd looking and creepy to begin with, is the sleazy nature of his relationship with his mother who coddles him to the point of uncomfortable. In one scene we are exposed to their rather incestuous relationship as she offers up her breast like she might with a new-born. Then taking it another level he begins to fondle her genitals. This escalates into a what I’m calling the grand finale of sleaziness in the last act. But for new viewers, I’m going to save that bit for your own experience. 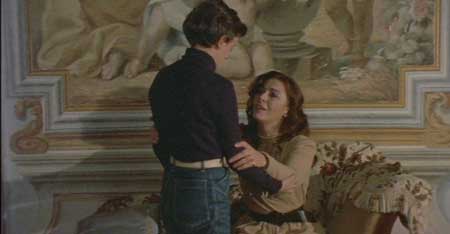 Burial Ground falls into many descriptive classifications that make this a movie worth exploring. It’s moronic, its visually interesting, its extreme, its dorky (and because of that funny???) and it really is one of the great earlier gorefest zombie films. I would have to say in many ways it’s the kind of product I’ve seen influence others that have gone onto better storylines. Andrea Bianchi may have been confused, short budgeted or just lost site along the way of his film, but with that said he also has left us one unique and oddly satisfying product far beyond the modern releases of zombie films. If you like Italian zombie films, then make sure to at least see this one once for your recollection of the movie behind those famous art house images.