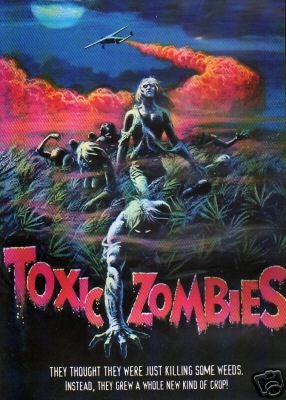 After drug crops are sprayed with a chemical by a passing airplane, the growers of the crop are poisoned by the chemical and turn into zombie-like mutants.

It is amazing to me how much the events of the last few months have changed how I look at zombie movies. Take Toxic Zombies (otherwise known as Bloodeaters) for instance. This was not a great zombie movie. Heck, it wasn’t even an okay zombie movie. And before the whole incident in Florida where one man supposedly went on a naked, drug-fueled rampage and ate another man’s face off, I would have said it had one of the lamest plots of any zombie movie I’ve ever seen. 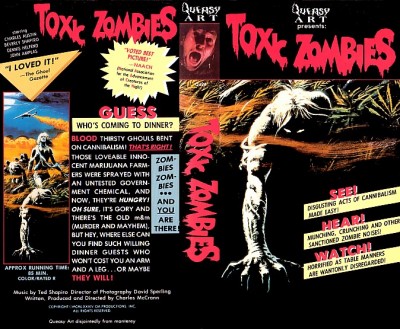 HOWEVER. The incident in Florida happened, and before an autopsy had been done, everyone was trying to blame it on a new drug called Bath Salts that supposedly makes people go nuts, get hot and take off their clothes, and turn super aggressive so they lose it and want to eat human flesh. 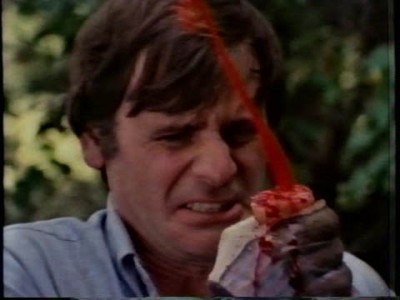 It sounds insane that anyone would purposely want to take a drug that made them act in such a way. The idea that the government might be making a drug or chemical or pesticide that does such a thing should sound even more insane (unless you are super paranoid and sure the government is out to kill/control/etc us all).

And that is the basic premise of Toxic Zombies. So it should be ridiculous. Some intense and bloodthirsty hippies (yeah, that surprised me too) are growing weed out in the woods and the government finds out about it. Instead of driving up and arresting them all, they send a plane loaded with some experimental pesticide to douse them all and, I don’t know, scare them away? That wasn’t made very clear.

But the pesticide doesn’t scare anyone away. Instead it makes them super hungry – for human flesh! Or for human blood. Once again, I’m not really sure what exactly was going on. Because as compelling as the idea behind these zombies seems now because of the similar real life events, when it comes down to it Toxic Zombies is an awful film. It looks terrible, it sounds terrible, it is full of terrible actors, and the premise is terrible.

Zombie movies shouldn’t be boring, but this one was. Zombie movies should either have voodoo style zombies or back-from-the-dead zombies, and this one didn’t. The zombies here don’t even really count as zombies, which may be why the film didn’t originally even have zombies in the title. Cause honestly it makes no sense. They may be flesh/blood eating cannibal killers, but they aren’t zombies.

I didn’t recognize any of the actors starring in this film and no one stood out from the crowd for me. The fake mentally handicapped kid was stereotypical enough to be annoying rather than offensive. The main female character (or as much the main female character as I could tell) was annoying enough that I was just waiting to see her killed (and then I missed her death scene because I went to the dang bathroom).

There are some older horror films that definitely hold up to the test of time. This was not one of them. Sure it had a few booby scenes, and a few gruesome death scenes, and a few bumbling idiot scenes, but was no Texas Chainsaw Massacre or Last House on the Left or Nightmare on Elm Street.

The only thing that really made this film stand out for me was the seeming similarity between the real life face-eating cannibal in Florida, and what happens to the murderous weed-growing hippies in the film. If it hadn’t been for that, I probably wouldn’t even remember what this movie was about.