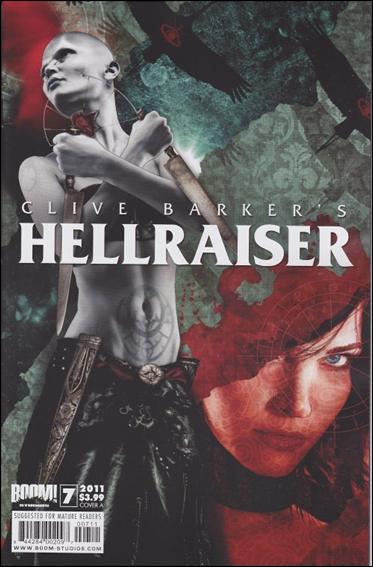 Kirsty has taken the bait, commenced her journey, flinging herself head first into Hell’s dominion. Promised with salvation, she has become a pawn unto her own damnation. The promise of being rejoined with her loved ones is too big of a carrot not to jump at..and so it has begun. This new chapter in the Abyss has begun with the arrival of the troublesome one. Seeing her loved ones is only fleeting as the walls come crashing down to reveal the labyrinth, the domain of Leviathan.

Kirsty who now seeks Pinhead, “the priest” as she calls him, begins her journey taking her into strange lands and sights. Almost consumed by “The Engineer” she is momentarily rescued by Pinhead’s lover, the female cenobite. Her role for this issue seems to be as mentor or guide for Kirsty who is in search of the priest himself. She explains to Kirsty that the wheels of time move slow here to prolong the suffering.

We are also given a peek into the factor that keeps Hell as it has been. That one cannot suffer if torture is routine….the same going for pleasure. The cenobites inflict war, love, mingling and feasting, but never to the sound of comfort or the chance to adjust fully. This is Hell’s ultimate weapon of suffering.

Meanwhile back at the mountain of chaos, Pinhead reveals that his plot has thickened and coming together as planned. Kirsty has taken his offer which is allowing him to go into uncharted territories…the sanctum of Leviathan. A place even much for Pinheads harrowed existence

We learn 1 additional piece of importance, that “to” destroy the box as Kirsty has, unleashes consequences with purpose.