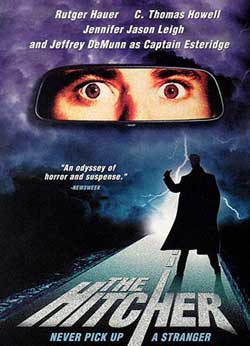 Jim is in the process of driving a car across the country when he decides to pick up a hitchhiker named John. John seems like a nice guy at first but it soon becomes apparent that he is a psychotic murderer who likes to kill people for sh*ts and giggles. Jim manages to escape but his nightmare is just beginning as John begins stalking him, leaving a trail of dead bodies everywhere he goes. Hunted by John and the police (who think that Jim is responsible for the murders) Jim tries desperately to escape and clear his name before it is too late.

Never pick up a hitchhiker, my friends. Nothing good ever comes of it. If you don’t believe me then watch this awesome movie. The Hitcher is nothing short of a masterpiece in my opinion and there is absolutely nothing bad I can say about it. It hooks you in from the very beginning and if you don’t find yourself sitting on the edge of your seat for the biggest majority of the time you are watching it then you may want to check your pulse. It has a little something for everyone including a very interesting plot, great characters, a pretty high body count, some neat twists and turns, and suspense so thick you can cut it with a knife. Needless to say this is a brilliant movie that is more than a little ahead of its time (and inspired many, many similar movies that followed). 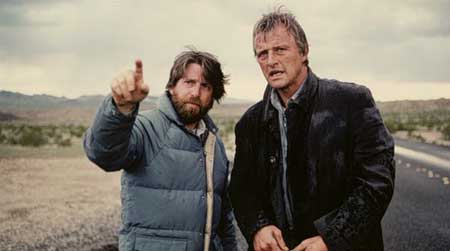 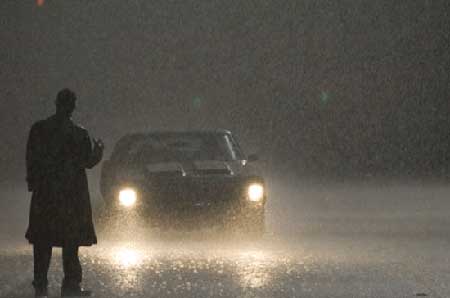 The first time I saw The Hitcher I was in the sixth grade and I thought that it ruled. I have seen it many times since then and I think I enjoy it a little bit more each time I watch it. One of the things that I really like about it is the fact that there is never a dull moment and there is almost always something going on that kept me entertained. I loved all the action-packed scenes that take place that include people being killed and things (as well as innocent bystanders) being blown up, but I also dug the more subtle scenes that focused on John playing mind games with Jim as well (the scene with the French fries is classic as is the bit with someone tied between two trucks that I won’t spoil for you here). If you are looking for an exciting movie that successfully combines several film genres such as action, horror, and suspense/thriller then this is the movie for you. I personally guarantee that there will not be a single moment while you are watching this movie that you will feel anything remotely close to boredom. On the contrary, your heart will be racing pretty much the entire time.

Without a doubt the characters definitely help make The Hitcher a winner. C. Thomas Howell is great in the role of Jim (I am pretty sure that this was before he decided to play the role in the horrible, racist, universally hated turd Soul Man that did serious damage to his career) and you can’t help but root for him. He faces some very terrible and horrifying things over the course of a few days and you want him to survive his ordeal. Jennifer Jason Leigh (whatever happened to her?) is also good as the poor girl who gets caught up in the war between Jim and John, but in my opinion it is Rutger Hauer’s performance as John that steals the show. I have always been a huge fan of Hauer’s work and I think that this is possibly the best performance of his career. John is just a very complex character who is charming, creepy, highly intelligent, and totally out of his mind. We never really find out a whole lot about the character or why he feels the need to do the things he does, but it works as it makes him mysterious and a lot more intimidating. He is one of the best horror movie villains of all time and there is no doubt in my mind that he inspired the creation of other horror characters such as Jigsaw from the Saw movies. The guy has a sick mind and is a cruel, violent individual but I (and countless other horror fans) can’t help but love him. 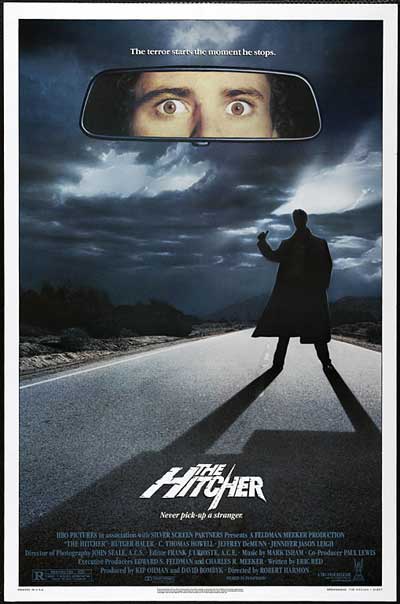 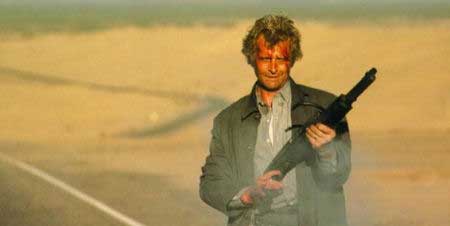 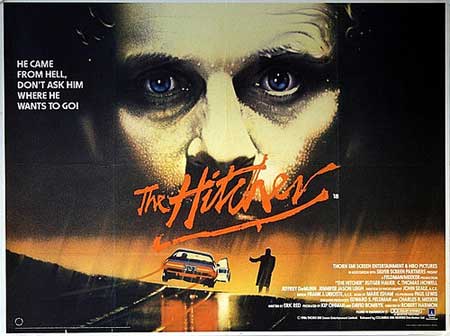 Written by the very talented Eric Red (who never seems to get the recognition and respect he deserves), The Hitcher (1986)  is a thrilling movie that is held in high regard by most fans of the horror genre. I agree with the fans of the movie and think that it kicks all sorts of ass. It holds up very well when compared to other horror films that were made around the same time period and is a lot better than the majority of scary movies being made today. Do yourself a huge favor and check out this movie as it is a modern horror classic in my humble opinion.