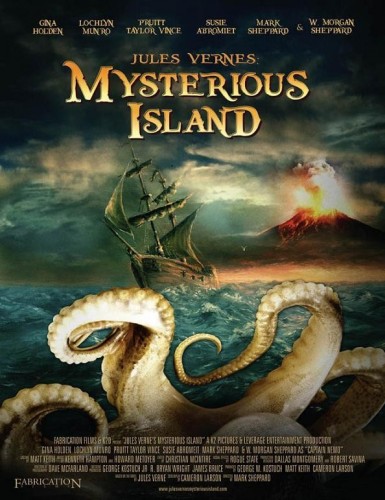 American history meets fantasy in one of the greatest action-adventure tales of all time, Jules Verne’s Mysterious Island, a newly updated cinematic adaptation of the beloved literary classic, The Mysterious Island (1874), landing on DVD May 29 from Green Apple Entertainment.

Littered with wreckage, the island is home to a cast of survivors who have been lost in space and time, including Abby and Jules Fogg (Susie Arbromeit, Battle: Los Angeles, and Gina Holden, Saw 3-D, Alien vs. Predator), two young women from modern times who become stranded while flying over the Bermuda Triangle.

Forced to defend themselves against vicious pirates, terrifying creatures and a volcano that’s ready to blow, they must find a way to survive. Their only hope to escape the island lies with its longest resident, Captain Nemo (W. Morgan Sheppard, Star Trek, Transformers, Gods and Generals). With his help, they craft another plan … But will they make it before the island claims them all forever?

Directed by Mark Sheppard (Battlestar Galactica, Supernatural, Firefly, Warehouse 13), who makes a cameo appearance as a young Nemo (the adult role portrayed by his real-life father).

Jules Verne’s Mysterious Island is presented in widescreen with an aspect ratio of 16 x 9 (2.35:1) and 5.1 Dolby Digital Surround Sound.