UK magazine The Dark Side is going from strength to strength with this new era of its publication, and while some may point out the new layout and design evokes the old Fangoria style, the content sets it apart from a lot of other horror magazines. Despite a dark period prior to its original cancellation in which the title had a great number of issues brought up with its content and value, these new issues are getting stringer with each new edition.

Issue 145 brings to the fore why The Dark Side is different to a lot of other genre magazines, as it amply covers the classics and the nostalgia fests as well as cutting edge new releases, and this makes for a hugely satisfying read which quenches the thirst for both new blood and the old favourites.

In this issue there is a superb interview with none other than Bruce Campbell, in which he covers the original Evil Dead along with material on Evil Dead 2 and Army of Darkness, as well as some revealing answers regarding his reluctance to be involved with the new Evil Dead remake.

Another major interview in this issue with with scream queen Danielle Harris, who has spent rather a lot of her career screaming and running from lunatics in movies. Then there’s a feature with the late Ken Russell on his legendary filth masterpiece The Devils, an interview with one-time Doctor Who companion Annette Wilks, features on new movies from around the world (Such as the unnerving film ‘Bunny Games’, which sounds demented), a comprehensive reviews section and more.

The magazine is currently doing a good job of offering material you won’t find in other magazines (or indeed online) and as such is well worth the cover price. It’s a great magazine for those of us with a penchant for looking back at the horror genre with a nostalgic eye as well as those gorehounds with a taste for the brand new talents and titles on the chopping block. It’s a pleasure to be able to report that the standards offered by the first few issues of this new run are being maintained in fine style. 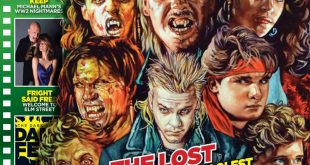 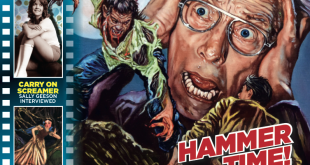 Magazine Review: The Dark Side – Issue 182