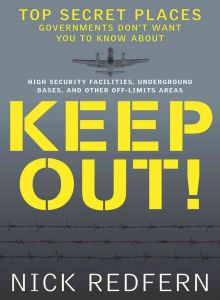 At the center of many conspiracy theories is the constant concern over the Government and the world’s interest with underground bases. We are on the cusp of entering into year 2012 of which its rumored that “many” of these facilities have been created exactly for. Whether it’s a worldwide crisis, nuclear event, epidemic, viral outbreak or other…there has long been a concern that elitist find shelter to hide away while the chaos of events unfold.

Nick Redfern takes on this huge interest subject that not only asks where, but for what purpose. We begin with the famed “Area 51” which has long been at the heart of secret facilities. In fact its so well known and so protected that it almost serves as a poster child for examples of restrictive secret. Films, Television and literature have covered this particular location for years. So much that you would think the facility itself could serve as a decoy while they plot other more “less sensationalized” locations.

We hear reports of those who came forward, worked on UFO technology and high profile engines designed to mimic the same technology that we have come to call UFO’s. The subjects of UFO’s ave long been tied to these underground locations which are designed to hide the most sensitive secrets from the rest of the world. It doesn’t stop there as we hear reports of foreign countries who have designed such sites for purpose unknown but “believed” to be in connection with the 2012 concern. Redfern details all this and more.

Redfern documents his research into the cases surrounding these hidden bases and undisclosed locations. History has revealed that in the event of crisis such as the 911, important officials have been zipped away to any of several hideaway locations to be kept out of harms way. Is there a bigger purpose in connection with these bunkers? Is there a bigger picture unveiling that only will reveal in the near future? It’s certainly a complex mystery that several books and several authors can only fill in with pieces of the ultimate puzzle.

“Keep Out!” takes us more thru situations than in depth analysis of the sites themselves. For instance, the famed Philadelphia Experience and its follow up legacy of Montauk. We are told about the locations (or as much is known), but to simply leave it at that would be “probably” uninteresting. So the author gives us brief overviews of “what” the location means to the conspiracy world and what has transpired in its connection.

“Hangar 18”, we all might remember from its often publicized alien-kept-storage facility. In fact, most of our generation may have simply gained insight thru shows like “The X-files” whether we realized it or not. but rest assured that these locations (or stories for that matter) are often based on true accounts. The purpose, as its detailed din the book is mixed and intermingled between the UFO, the supernatural (Hitler days), remote viewing (spy experimentation), gene manipulation, weather control (HARRP), time travel, war related studies and…..invisibility, to name a few.

My impression here is that Rick has only tapped into the reports, which have been further elongated in other books (that focus on the specifics). In fact, many books have been written just on the “unified theory” aspect alone. It’s a great, “here is where we are, so far” kind of read that is suitable for curiosity seekers. My only disappointment here which I was hoping would be a major inclusion, was lack of the noted “Denver Airport” theories known to house an important underground structure (believed). Also I wouldn’t mind a update on the NORAD. Call it a Colorado edition…. In summary, there is important research and fact finding here that doesn’t overwhelm. I think that is a huge draw in itself.