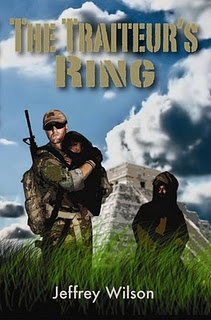 In all honesty I’d initially approached The Traiteur’s Ring with the same enthusiasm as a hippy in the late sixties regarded the Vietnam War. We’re faced with so many every day real horrors in 21st century living one may argue such grisly turmoil has no place within our fictional escapes. Wilson captures this statue of realism exploiting a very close to home mentality as our protagonists the U.S. Navy SEALS are stationed in Africa in the midst of an all out war on terrorism and specifically Al Qaeda.

Ben Morvant along with fellow comrades in arms Reed, Lash, Auger and Chris attempt to thwart the brutal invasion on one of the jungle’s local villages. Carnage and blood shed ensues. As the body count rises of the innocent, several of the terrorists join Mohammed in quickly contributing to the cadaver quantity. Morvant, the SEAL’S resident medic tends to the survivors. An uncanny power for healing permeates through one of the elders, passing along the ability to resurrect. A toddler left for dead engages in reanimation before his eyes as the mortal wounds diminish to nothing. The villagers rejoice. A god is born.

Throughout their mystical, paranormal exchange the elder initiates a telepathic dialogue. He essentially pronounces him as the chosen one. He is the Rougarou. Flashes of Ben’s upbringing in the Louisiana Bayou are high lights and exposition into luring the reader into getting a grip on his seemingly unreal reality of ESP.

The elder swiftly grants him a gift, a healing ring in which holds tremendous power and responsibility. During the remainder of their tour strange things begin to happen. In several instances he heals his wounded comrades when they should have been mortally wounded.

A bond deeper than anything of this earthly plain is conceived between the toddler, aptly renamed Jewel and Ben. Paternal instincts prevail as he’s inspired to propose to girl friend Christy upon the tour’s return to his native Virginia.

They honeymoon in Louisiana upon Ben’s request so he may find closure and answers to the haunting questions as to how his Traiteur’s core was conceived. A spirit guide unveils his ultimate destiny as they return to action in their war on Al Qaeda.

Wilson combines a very original concept of the war on terrorism with a paranormal twist. One does not have to be a war enthusiast or history buff to be moved to chilling lengths. If ever the saying ‘do not judge a book by its cover’ reigned supreme this would be the case. In a time when retro remakes are a thing of the ordinary The Traiteur’s Ring is alarmingly refreshing and universally moving.