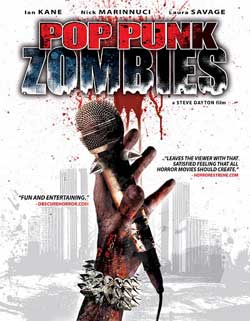 A high powered music agent brings three recently deceased rockers back from the grave to form the first zombie punk band. Eddy, the leading character, is dragged to the concert by his buddy Ciez, but only stays to see his ex-girlfriend, Lisa. The show is cut short when the zombies break free and the gruesome flesh-eating ensues. Soon Eddy must save his friends from certain doom and becoming… Pop Punk Zombies.

As an avid enthusiast of both pop punk and horror films, a movie titled Pop Punk Zombies has instant appeal to me. Unfortunately, not much beyond the title was able to captivate me. 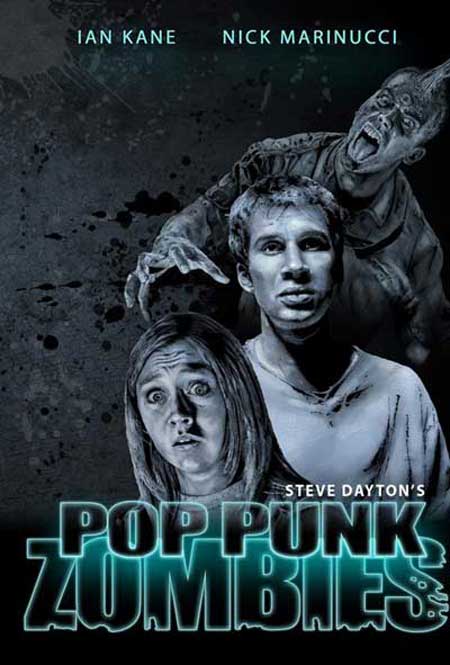 Dameon David (Adam Hatfield) is a big-time music agent always eager line his pockets. When he discovers a way to bring the dead back to life, he naturally attempts to use it to his advantage. Dameon resurrects three musicians who died in their prime and hands the ghouls instruments to form an undead supergroup called The Vicious Vegans.

There is a lot of hype surrounding the band’s first show back from the dead, and our protagonists, Eddy (Ian Kane) and Ciezmore (Nick Marinnuci), score a pair of tickets to the anticipated gig. Eddy is bent out of shape about recently losing his girlfriend, Lisa (Laura Savage), while his buddy Ciez just wants to have a good time while witnessing history.

The Vicious Vegans plays typical pop punk, but if you ask me, the singer’s voice is monotonous and flat, while the concert lacks energy. (Perhaps this is due to the fact that they’re zombies. In any event, the other music on the soundtrack is superior.) This doesn’t matter much, however, as the performance doesn’t last long before a protester unleashes the band members from their restraints.

You can probably imagine what happens next: chaos ensues as the zombies begin to devour the audience members. In a typical plot device, Eddy has the chance to escape but instead goes back in an attempt to save Lisa, and Max reluctantly accompanies him. The movie badly suffers from predictability.

From the start, the viewer knows that everyone is going to get trapped in the venue with the band of flesh eaters. Even the characters know that they’re going to see reanimated corpses, although they hardly bat an eye at the idea of zombies and seem unfazed by the potential danger. The story would have worked better had it been an established band that died and then the greedy agent brought them back to life without the audience knowing.

What really would have helped the picture, however, is a sense of humor. For such a silly and cliched plot, it surely would have behooved writer Brian Leis to provide a dose of comedy to make it easier to stomach. Alas, the film takes itself far too seriously and gets rather boring as a result. The final scene is a hackneyed, melodramatic epilogue better suited for a soap opera than a zombie flick.

The film has low production value with desaturated colors, harsh lighting and soft focus. The acting is expectedly poor, the gore is mostly just splattering blood and the make-up is downright bad. While most of that is excusable for an independent film, what really bothers me is the inconsistency of the zombies. The band members go from typical, lumbering zombies to capable musicians in a matter of seconds. Similarly, some of the people turned into zombies maintain their speaking skills while others simply become ravenous.

I give first-time director Steve Dayton props for the novel idea, but the film fails to do it justice. The commentary of money-hungry producers exploiting musicians is clever, as is the protesters’ parallel to immigration debates, but the picture just isn’t very entertaining. Pop Punk Zombies is one of those movies that was probably a blast for the cast and crew to work on – after all, both pop punk music and zombie movies tend to be fun – but none of that translates into the final product.