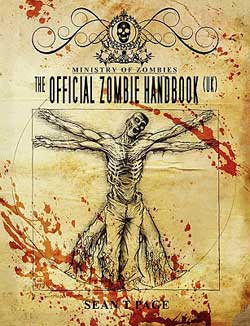 The Official Zombie Handbook- The Ministry of Zombies

If you think your having deja vu, your not the only one. I’ve reviewed I believe at least 4 books sporting the title of “Zombie Handbook” this year…give or take. This one though has a particular focus in that respect which is centralized in Australia. I believe the message that is being sent loud and clear is that Zombies are all the rave. And…. in the respect of this book, origin of country doesn’t really have a hold on what zombies are about and how we should deal with them. As an active horror-obsessed culture, we get film after film handed to us on zombie culture toting inventive perspectives and new ideas on why they exist.

Though more specifically, this year, we have a gaggle of authors pouring their hearts and souls into talking about and catering to the same audience that tunes into our now weekly zombie TV shows..cool eh!!

Well this latest read is indeed an entry into that bunch sporting the confident title of “The Official Zombie Handbook” with the subtitle of “Ministry of Zombies“. It is just under 200 pages and lacks the visual flavor that others have donned, though I must say its a very well read book. So, if you are a picture person, then your gonna be disappointed in that area. The content is still worth your attention, so o have at it.

While usually the essence of these reads is to approach the pages with humor and silliness this one tends to tackle a different tone.

One thing that’s apparent here is that this book tens to believe that zombies might or might “eventually” be real. It overviews experiments keep secret and noted findings that suggest “perhaps” a future outbreak of some sort. Now, fact or fiction I have to assume its fiction but its factual chapters seem to suggest that zombies “or” the resurrection of the dead is indeed in motion. With that basis, it builds on its premise, which is survival in he wake of dead rising.

There is much hear that talks about how zombies are and how the media and cinema has progressed them. Fast zombies though don’t seem to fit within he script of this book which states that they might have strategy in numbers but lack the coordination to do intellectual things. This also includes the act of chasing down its targets and swarming them with vicious chaos. They do however posses the single element that supercedes our own. That is they don’t rest, they don’t stop and they can continue much longer in there persistence than we may have the energy to fight.

It’s quite intriguing an makes alot of sense. In fact, fiction it may be, but this might just be the kind of savvy know-how that you might call upon if “such” an event were possible. I didn’t understand the ZED-con stuff as much but if that’s not your thing, then no worries.

For all we know, the dead “may” come back to life thru science religion or just some sort of end of the world mayhem. It’s hard to phantom that Romero was onto something, but the idea does require some inventiveness and thought. The Official Zombie Handbook roots it base in the UK, which includes a worthy 90 Day Zombie Survival Plan for survival. The event might warrant special weapons or even suggestions on where to hide as a mass unleashing of undead blanket the country. The book is small enough to warrant a comfortable spot on your shelf right next to your 2012 books. Though let’s hope that fiction stays fiction so we can keep the flesh eating quarantined to TV and not our backyards.