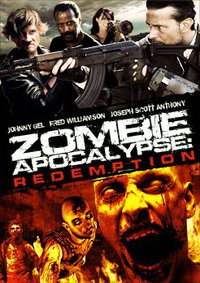 Pacific Entertainment is set to release the Ryan Thompson directed zombie epic ‘Zombie Apocalypse: Redemption’ on DVD in North America October 20th. The action-packed feature stars Fred ‘The Hammer’ Williamson as the leader of one of humanity’s last remaining settlements in a world decimated by zombies. Williamson not only finds himself fighting off the zombie hordes but gangs of savage humans who take what they want and will kill anything in their path.

The DVD will be available for $14.99 at retail stores and on-line. In addition to the feature the DVD contains a ‘Making of’ documentary, deleted scenes, and commentary tracks from the director, writer, and stars.