In anticipation for Season 2 of The Walking Dead, each week I’ll be bringing you a special look at our beloved cast of characters. This week we shall take a look at our favorite cop from Georgia, Rick Grimes. He is the central character to the series and one of the most complex.

Stepping into the shoes of an everyman cop turned hero during the zombie apocalypse, Rick Grimes, is Andrew Lincoln. After being wounded in the line of duty he slips into a coma during the zombie apocalypse. When he woke up he was disoriented, confused and scared. He set off to find his wife and young son. Along the way he discovers what happened to the world he once knew.

Rick is kind, stubbornly moral and thinks about what is best for everyone. This, coupled with his law enforcement background, makes him a great and natural leader. He is very calm and level headed. He is flawed though. His desire to follow his strong moral convictions and help everyone puts a strain in his marriage and his relationship with his son. He always tries to do the right thing. He remains optimistic about the current horrible situation and survivors in the group see him as a strong rock to lean on.

Rick Grimes in The Walking Dead television show doesn’t really deviate from the Rick Grimes comic book fans know. His origin is slightly different. Instead of hailing from Georgia he’s from Cynthiana, Kentucky. He also appears in the first issue of the comic. I won’t include any spoilers here but Rick is supposed to change drastically from the man we see in the beginning. I suspect his morals will be further tested, and his ability to keep the human spirit alive is going to deteriorate. While also being a good man, he does seem to see the good in others and encourages others to see the same. He may doubt himself but his confidence remains high for his decisions.

Would you want him on your team? 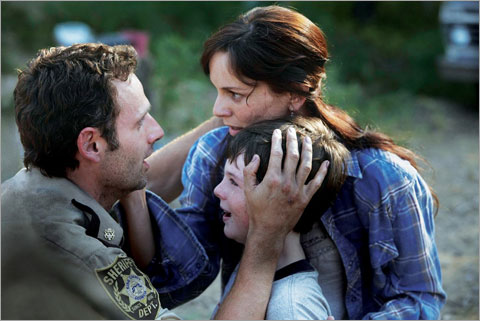 Lori Grimes: Lori is his wife.  While she is very reluctant about some of Rick’s decisions, like risking his life to rescue Merle Dixon after he was reunited with his family again, she supports him wholeheartedly.

Carl Grimes: Carl is Rick’s son. Carl believes his dad knows best and isn’t too worried about his decisions, even ones seen as reckless.

Shane Walsh: Shane is Rick’s best friend. He doesn’t seem too happy that Rick is alive. He stayed with Lori and Carl to ensure their safety and survival when Rick was in the hospital and the outbreak occurred. Lori and Shane develop a relationship in Rick’s absence, one that Rick does not know about.

Morgan and Duane Jones: Morgan and Duane are the first living survivors Rick encounters after leaving the hospital. They are a father and son duo held up in a house near Rick and Lori’s. Rick owes his life to them. They reluctantly took care of him. Reluctantly meaning, they didn’t know where his wound came from when they found him. Rick keeps in touch with them by ham radio, trying to warn them away from Atlanta.

Rick’s relationships with remaining survivors vary. He’s found to be dependable and most of the survivors look to him as a leader. He also encourages them to speak their minds. If someone has a problem they can talk to him about it. He will do anything to protect his family and almost everything he can to preserve a sense of humanity among the survivors. How far will he go? “We don’t kill the living!”-Rick Grimes

Have I forgotten to mention anything else about his character? Who is your favorite character in the series or comic? Please sound off in the comments section and look out next week for the next Character Profile: The Walking Dead: Lori and Carl Grimes. Revisit the first season on DVD and Blu-ray and continue to read The Walking Dead comics. I know I can’t wait to see what lies ahead for our characters. Remember, “All I am anymore is a man looking for his wife and son, anyone who gets in the way of that is gonna lose….I’ll give you a moment to think about that.”-Rick Grimes. How far would you go to protect yourself or your family?