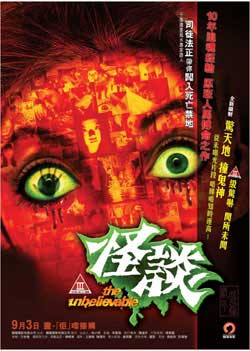 Based on a popular TV programme that explores the unseen and unexplainable, this big screen version follows a film crew to the eerie and mysterious location of Thailand. However, while shooting for a new TV programme series, the crew becomes totally unprepared for what they will encounter.

At first start, I was gearing up to be entertained from the introduction and build up. This movie converted from TV series promised to show us stuff that was left out of the tv show. We get a pretty thorough intro into the Hong Kong way of doing things, its culture on supernatural and a volunteer group that helps aid in daily tragic accidents. The team runs around with camera in hand hoping to catch obscure, violent and unnatural stuff.

Now as we are told, the film is based off off the 1996 TV series. They visit real life tragedies, but I was confused as to whether the film was truely pretending to be fiction or vice versa. As may segments are quite boring, then the fiction was weak at best. If they were trying for real occurrences, then the production is a bit confusing with enhancing scoring and “jump” sounds added to the footage.

What is extreme for this film, is that while they visit different situations we do get to see what I assume to be real life graphically uncensored animal mutilations. In one segment an odd shaman who brings out a statue of a baby ghost he named “Fa” (I think that’s what that is) decides on camera that he needs to feed it fresh blood. So proceeding to grab a life chicken he pulls its neck out and start gnawing on it like a wild wolf. Still I’m not sure what the whole segment was supposed to represent, but its not something you really want to watch on screen.

In another portion, they come up a fresh cadaver that has hanged himself and slit his wrists as backup. We get alot of drama with the female help passing out which eventually leads to some kind of ghost ritual summoning. Nothing here to look at though besides the over acting of the participants who scream when a picture falls on the ground. A resident expert is on hand who explains what all this nonsense is supposed to do. Maybe it is a cultural thing but the end result is less revealing than anything you’d find on “Ghost Hunters”. How about the extortion shake down segment? What was that all about? Drinking poison, asking for money……were you as confused as I was? 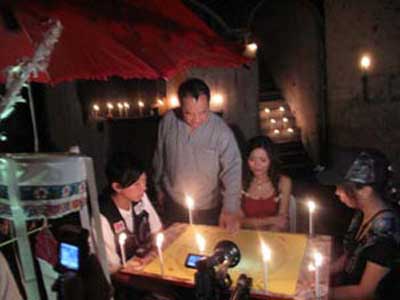 One of the more graphic scenes is the coverage of the 2004 tsunami tragedy that shows bodies floating, pictures of bloated asian corpses and a number of bodies washed up with debree. The purpose seems to be that the spiritual activity is much higher in this region due to this event. In another segment, we visit a witch doctor sort of nut that heals per way of dispersing maggots about his subject then eating them to cleanse the spirits. Now I’m no witch doctor but it all seems just too loony to be taken seriously on any account. As the man stares bugged eyed with worms dripping from his slobbering mouth….well its one of those thing that makes you go…hmmm

Directed by Chan Tat-Nin, I really didn’t care for most of this. I was expecting supernatural thrills whether real or fabricated, that seemed to be weak from both perspectives. The presentation is divided between reality TV and camera footage shots in what ends up being pretty much a let down on the most part. If you are looking for some bizarre foreign weirdness, then you’d got a nice helping of that …beyond that ….I would look elsewhere for supernatural thrills. I think what hurts the film is clear direction of material and organization. As we travel with the group for one purpose, they seem to miss their mark and try to make the best of something else. Fact, fiction…..reality…or maybe in the end we could care less either way??