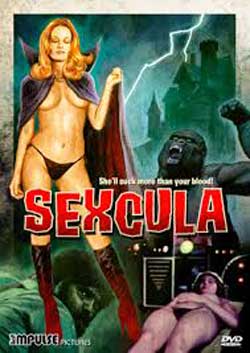 A young woman inherits a mansion and discovers a centuries old diary which details the exploits of Dr. Fellatingstein, who has created a man to satisfy her insatiable desires but he doesn’t seem up to the task. She summons a relative, Countess Sexula, to assist her in her quest for sexual satisfaction. Oh yeah…there’s an ape in here as well.

What did I do? All I did was say “Sure” to a request from my despicably evil boss and take on some screeners to watch and review. I am nothing if not a grateful Black Saint and I always try to help out down at Horrornews.net when the going gets rough. I figured I’d been doing a mess of interviews and my official title is Lead Theatrical Reviewer (I know this because it says so on my business card) so why not review some movies and contribute to the cause? Well the reason why I won’t be volunteering to do this any more is a film called “SEXCULA”. You read that right so don’t go rubbing your eyes, the film is called “SEXCULA” and although I know that the boss man dislikes me immensely, do I deserve to be punished like this? It’s just not fair that I have to even stain my brain with the memory of this film let alone write something about it but it is my job. Now I gotta figure out how to write another 500 words about this turdblossom of a movie…. 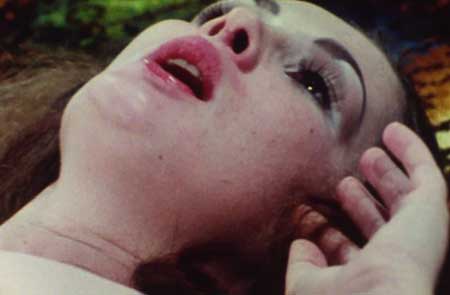 Editors note: We love Saint’s spirit of “watching films so we dont ‘have to energy!  Note to Film makers…… we have a special “send to Black Saint” box in our office…..so keep em coming  (LOL)

The plot? Upon watching this film all the way thru I’m convinced that the producers of this film decided that something as integral as a plot is to a film wouldn’t be necessary since they had a bunch of unattractive Canadians who can’t act and didn’t mind bumping uglies for 80 minutes or so. WHO NEEDS A PLOT WHEN YOU HAVE THAT? But to his everlasting shame, someone named David F. Hurry (yeah, like that’s his real name) is credited with writing some nonsense of a plot to hang all of the senseless nudity on to. And what is that plot you might be asking? Some naked woman (Debbie Collins) inherits a mansion and while rummaging around inside of it she finds a diary and begins to read the contents of that diary aloud during a picnic (cue the soft core flashbacks). She discovers that her ancestor, Dr. Fellatingstein (Jamie Orlando), has created a man she calls Frank (John Alexander) to satisfy her sexual needs but she mussed him up somewhere along the way and he can’t get it up for her. But he has no problem getting it up for her other creation which just happens to be a female who spends a lot of her time lying completely still on a slab in the good doctors dungeon. But the “Fembot” (I dunno what else to call her) seems to have the hots for the doc’s assistant, Orgie (Tim Lowery), who generally slinks around while slobbering up a mess of saliva but I guess it doesn’t really matter what he looks like because his schlong works just fine. 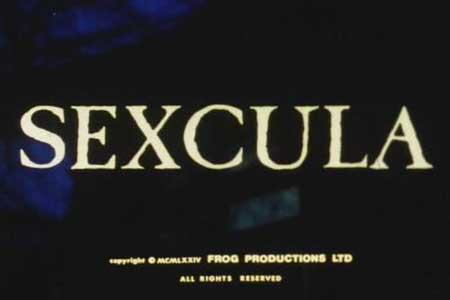 So what does poor Dr. Fellatingstein do? She calls upon the great Countess Sexcula (Debbie Collins…again) to help her set things straight! What follows are a bunch of softcore sex scenes featuring a stripper who is hired to excite Frank but only ends up exciting the doctor’s gorilla (Bud Coal) who rapes her on the dungeon floor, a lesbian romp during a carriage ride and a marriage in which the lucky couple decide that they can’t wait for the honeymoon and just go at each other on the chapel floor. But they include the best man, the maid of honor AND the priest as well so that makes it OK I suppose.

There really isn’t anything else to say regarding the storyline (Or lack of it) in this film. It’s just a series of vignettes clumsily linked together in an attempt to disguise the softcore shenanigans as something resembling a legitimate movie. It’s a terribly ugly looking film with seemingly no lighting used at all during it’s (among other things) essence sucking 87 minute running time. Can you imagine my horror when I realized that I had just sat through 87 minutes of the absolute worst softcore sex film I’ve ever seen (not that I’ve seen many of this kind of film…not me). None of the lead actors are especially good looking and since this was made during the swinging seventies when grooming really wasn’t too much of a deal breaker when you were feeling randy, everyone is especially hirsute in their nether regions. And for those of you who might have a problem with the word “Hirsute” (I’m sure there might be a couple of you), what I mean to say is that everyone is really, really hairy. 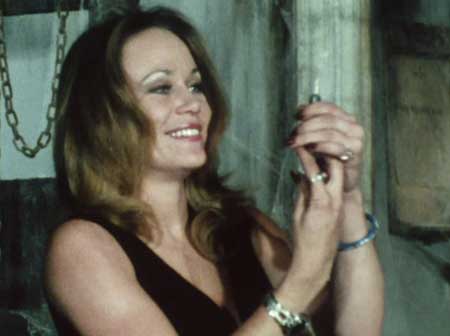 So there it is. I can’t review this movie as I’d review any other one because this doesn’t really qualify as a movie, at least not to me it doesn’t. All I can do is tell you what I witnessed and perhaps ask one or two of you if there are any jobs available where you work because I fear that I won’t be able to continue here at Horrornews.net much longer. It’s obvious that someone up high has it out for The Black Saint and they’re looking to drive me insane by sending me movies featuring extremely unattractive Canadians performing sex acts on one another in rooms so dark I could hardly make out who was doing what to whom (not that I was paying close attention to the movie…not me). And trust in my words when I call these people unattractive because there is nothing attractive about pimply, lumpy white butt cheeks bouncing up and down on what passed for a boner back in the seventies. And I just described their faces people! I’m not even gonna try to describe what their naughty bits looked like except to say that it seems that it was mandatory to attach the hairiest badger you could catch onto your crotch if you were making a P*rno film in Canada during the seventies. I’m talking serious foliage down there acolytes! 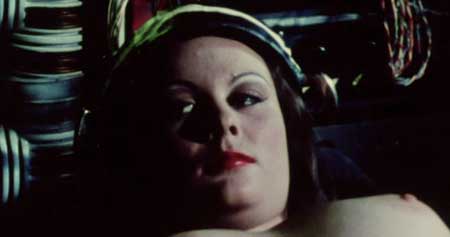 Now to all Canadian fans of Horrornews.net I’d like to say that The Black Saint loves Canada to death! You guys have snow, a great hockey team, David Cronenberg, Snow, A couple of cool Facebook friends of mine, free health care for all….did I mention snow yet? Either way, I don’t want any of you to think that I’m coming down hard on Canada, far from it. But this sweaty, hairy mess of a movie came from the great white north and you’ll have to take responsibility for it’s creation. Let’s be fair here, The U.S.A. takes full responsibility for Michael Bay doesn’t it? (although we do have to do something about him….and soon).

It seems that “SEXCULA” was something of a lost film thought to have never existed except in the minds of madmen and ten of the last 22 Canadian Prime Ministers but the good (does finding this really make them that good?) people at IMPULSE FILMS actually found a copy located somewhere in the confines of Parliament Hill, buried underneath 12 feet of concrete. I’m thinking of putting together a team of hardy explorers and searching underneath Niagara Falls in the hopes of finding a salvageable print of Jerry Lewis’ “THE DAY THE CLOWN CRIED”, another film thought to be long lost. Call me insane but heck, if somebody found this sucker up there then who knows what other cinematic gems might be up north, just waiting to be re-discovered underneath all of those empty bottles of Molsom? 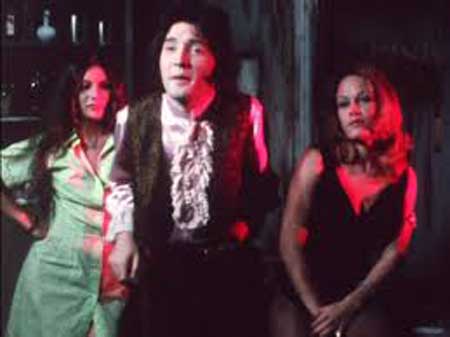 As for this little exercise in tedium…like I said earlier, it’s a turdblossom that caught someone’s fancy and it’s now available on DVD from Impulse Films. If you happen to be the one person on earth that refuses to die until you’ve seen every single soft core film ever produced in Canada then you’ve found your crown jewel right here so go ahead, watch it and die happily. Otherwise just stay as far away as you possibly can…OK? Now the thought of what other films arrived for me to screen along with “SEXCULA” is making me terribly afraid for my sanity. Dream darkly dear acolytes, dream darkly and think fondly of your old pal, The Black Saint, as he reaches into the box to pull out another film to watch….

P.S. Horrornews.net and The Black Saint loves Canada and all of our Canadian fans (all 12 of you)! So take it easy on the hate mail acolytes, I’m just funnin’ with you all. But “SEXCULA” really is a lousy excuse for a softcore sex film (not that I’ve seen many of them, nope, not me). 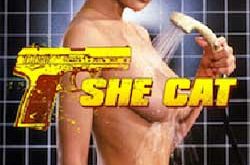