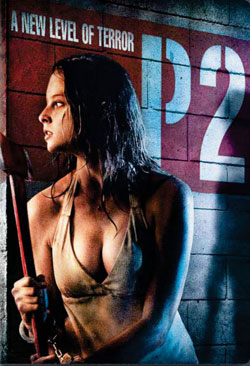 It’s the night before Christmas, and workaholic Angela Bridges (Rachel Nichols) is late for her family holiday party. She tries to leave the office, but her car won’t start and her cell phone won’t work — and then she meets the too-friendly security guard Thomas (Wes Bentley). After Angela turns down his dinner invitation, the twisted Thomas spends the rest of the night terrorizing her as she tries to escape the now-infamous parking level P2.

Get yourself a bus schedule.

Angela (Nichols) the workaholic is putting in those extra hours on Christmas Eve, trying to finish up so that she can make it to her sisters house where her family tiredly awaits her. As one of the last ones out with everyone taking off early, already late for the festivities, and now her car not starting in the deserted parking garage, things aren’t looking so good for our girl. Helpful security guard Thomas (Bentley) offers what help he can, but Angela must resort to calling a cab. And then somewhere between the cab arriving and Angela frantically running around for a way to unlock the front door, she wakes up wearing a lot less, handcuffed to a chair with a turkey and corn muffins dinner in front of her compliments of dear Thomas.

So begins the madness as lonely Thomas continually attempts to strike up a genuine friendship with the harried heroine. P2 preys on the old urban fear of after-hours parking garages, except here the problem is the person you’re supposed to be able to turn to for help and comfort.

With debut feature of Khalfoun, what you have here is a tight little romp that makes very good use of the garage location its set in, making it more of a giant game box for the criminally insane than a parking lot. Perhaps those that have been paying attention will notice the writers of the screenplay, Alexandre Aja and Gregory Levasseur. They’re the fellows that blessed us with the beautiful Haute Tension (Khalfoun in a small role), as well as the somewhat better but still lacking The Hills Have Eyes remake. With the blood and viscera flowing so freely in both of the previous mentioned films, I fully expected the same to go for P2, even with the knowledge that the movie consisted of one person trying to escape another in a locked down garage. Not the case, as for the most part arterial spray is traded in for mood and frightfully cheery Christmas music.

Thomas doesn’t drool or froth at the mouth. He doesn’t spout threateningly poetic dialogue (although he does appear to be a fan of Hemingway) or possess a burrowing charm to hypnotize the ladies. He doesn’t appear out of nowhere with a hedge trimmer or take 8 shots to the chest and get back up after a small breather. With his only friend being a Rottweiller named Rocky, he’s surely lacking in the companionship department, and that’s all he’s trying to do here. Make a friend. One that will perhaps lead to a relationship. I mean, it’s the holidays after all. People do weird things.

And it’s Bentley’s character, whom I believe if were tightened up script wise, and not so general acting wise, that keep this film from reaching the next level. But missed opportunities is the story there. We never get a real sense of desperation or a complete need from this character to be doing the things he’s doing. I wanted to despise him and at the same time feel sorry for him, but the movie never drew those feelings out of me. Make me feel that the dog is your only friend in the world, don’t just tell me.

As the dialogue lessens and the threat heightens, Nichols gets better. She goes about each step, every failed escape plan, and all glimmers of hope realistically which certainly help the cause.

For the gorehounds out there, this is certainly the tamest film to come from the French filmmakers, but you do get a few bones thrown in there. Or rather intestines and an eye gouging.

P2 is a worthy film debut, and as with Aja, Khalfoun shows a good deal of potential.

Check it out if you got yourself a horror hankering, but haven’t quite worked up the energy to see another Saw film.